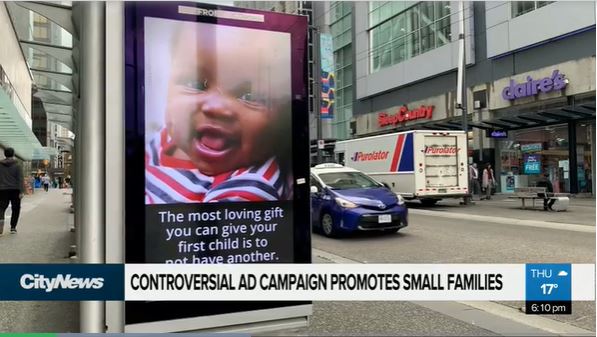 Advertisements promoting one-child or child-free families are appearing around Vancouver, British Columbia, with the intention of convincing young people not to have children in order to save the environment. One advertisement features a smiling baby and states, “The most loving gift you can give your first child is to not have another.” Other ads state, “We Chose One!” and “We Chose Childfree!”

The ads were placed by the group “One Planet, One Child,” which aims to move society towards a “small family norm.” The group’s goal is to drop the world population from today’s 7.8 billion to below 3 billion 100 years from now. The group states on its website that it has placed similar ads in Minnesota and Colorado, with similar advertisements soon to come in other U.S. and Canadian cities.

A healthy replacement fertility rate is 2.1, and the global fertility rate currently sits at 2.4. However, researchers have found that the world fertility rate is falling, and will drop below 1.7 by the year 2100. Twenty-three countries are predicted to see more than a 50% decline in their populations. This drastic decline in the population will lead to an economic crisis, with countries unable to support health care programs or welfare systems. With not enough people in the workforce compared to those of retirement age, the retirement age will rise — predictably by 8.4 years by 2050. Economic disaster is so imminent in some nations, like Hungary, Denmark, Italy, and Singapore, that these countries have put incentives in place to encourage couples to have more, not fewer, children.

“To be successful we need a fundamental rethink of global politics,” Professor Ibrahim Abubakar of the University College London told the BBC. “The distribution of working-age populations will be crucial to whether humanity prospers or withers.”

It seems that groups like “One Planet, One Child” are more concerned with the future of the environment than the future of humanity. However, new innovations and ideas from future people — some who have yet to be born — have the potential to help the environment… but not if those people aren’t born. Not if humanity “withers.”

“One Planet, One Child” says it is “not dictating anyone’s family size” but simply “helping young couples make informed decisions.” It says, “The choice is theirs.” But the group’s advertisements are reminiscent of Chinese ads promoting the government’s one-child policy, which state, “Less births will be better for your child,” and “Fewer and better births, happiness throughout your whole life.” Eventually, the constant presence of those advertisements convinced Chinese young people that having one child was the right thing to do, not something they were being forced to do.