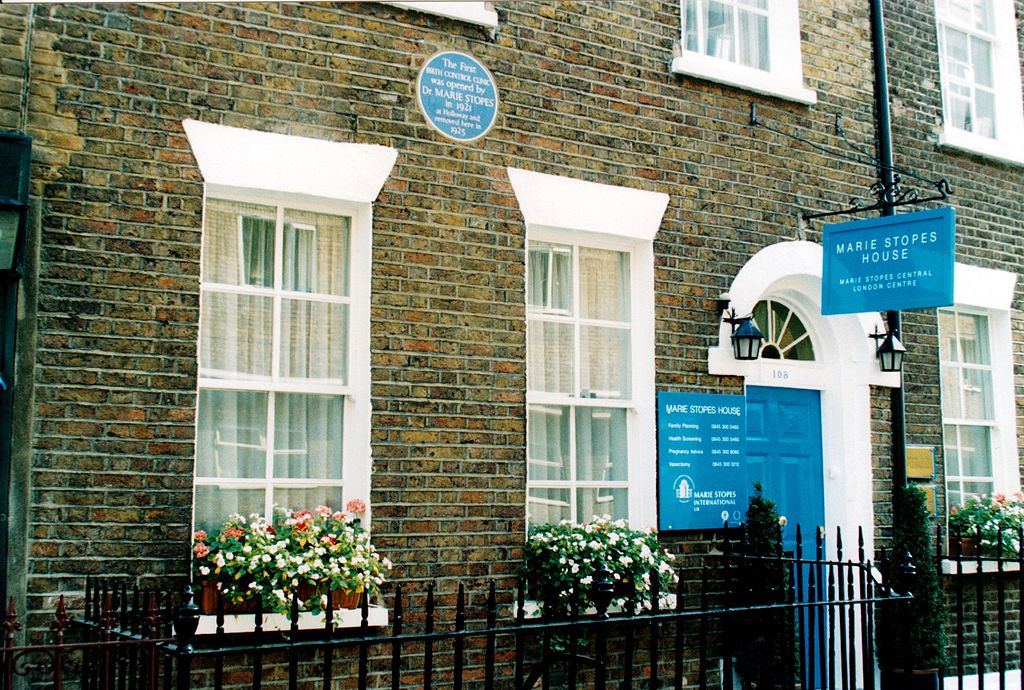 UK’s abortion chain Marie Stopes International (MSI) has announced a name change in an effort to distance itself from the eugenicist for whom it was named. According to a press release, Marie Stopes International will now do business under the moniker “MSI Reproductive Choices.” While the organization claimed the name change had been under review for some time, it pointed to “the events of the past year and the critical global conversations about race and diversity” which it said “reinforced to us that changing our name now is the right decision.”

The move comes shortly after Planned Parenthood, the largest abortion corporation in the U.S., finally acknowledged its own founder’s history of racism and white supremacy, and faces accusations of racism from current and former employees.

“Marie Stopes was a… supporter of the eugenics movement and expressed many opinions which are in stark contrast to MSI’s core values and principles,” said Simon Cooke, Chief Executive of MSI Reproductive Choices, in the press release.

However, a name change cannot erase MSI’s controversies, such as numerous scandals, including the promotion of illegal abortions in Kenya and the unfortunate death of a patient in 2018. According to Right to Life UK, a 2017 report from the UK’s Care Quality Commission (CQC) accused the abortion group of paying staff bonuses for persuading women to have abortions. In 2016, MSI was forced to “suspend abortion services for a month after an unannounced inspection by the CQC found “dead foetuses lying in an open bin and staff trying to give a vulnerable, visibly distressed woman an abortion without her consent.”

Stopes founded Britain’s first birth control clinic in 1921 in North London until it later relocated to Whitfield Street in central London. Upon her death in 1958, Eugenics Review author Vera Houghton claimed that Stopes bequeathed the Whitfield Street clinic to the Eugenics Society. In November of 1975, the building was purchased by Tim Black. Archived history pages of MSI (2010, 2011, and 2012) show that MSI “grew out of the organisation originally set up by Marie Stopes in 1921.”

MSI points out that Stopes did not actually found MSI. It was named after her “legacy… of family planning”:

Marie Stopes was not our founder. Our organisation was started in 1976 by Dr Tim Black, Jean Black and Phil Harvey, who opened their first clinic on the site of the original Marie Stopes’ Mothers Clinic in central London. They named the organisation in recognition of the origins of that historic building and Marie Stopes’ legacy as a pioneer of family planning. However, Marie Stopes herself was also an advocate of eugenics and expressed opinions which are in stark contrast to MSI’s core values and principles today.

Stopes had more than a legacy of “family planning.” She was a member of the Eugenics Society who advocated for the sterilization of the so-called “unfit.” She also founded the Society and Clinic for Constructive Birth Control and Racial Progress (CBC) which included Henry Pratt Fairchild, who was a past president of the American Eugenics Society and a vice-president of the American Birth Control League, which later became Planned Parenthood. In 1938, Fairchild also sat on the board of the National Society for the Legalization of Euthanasia. 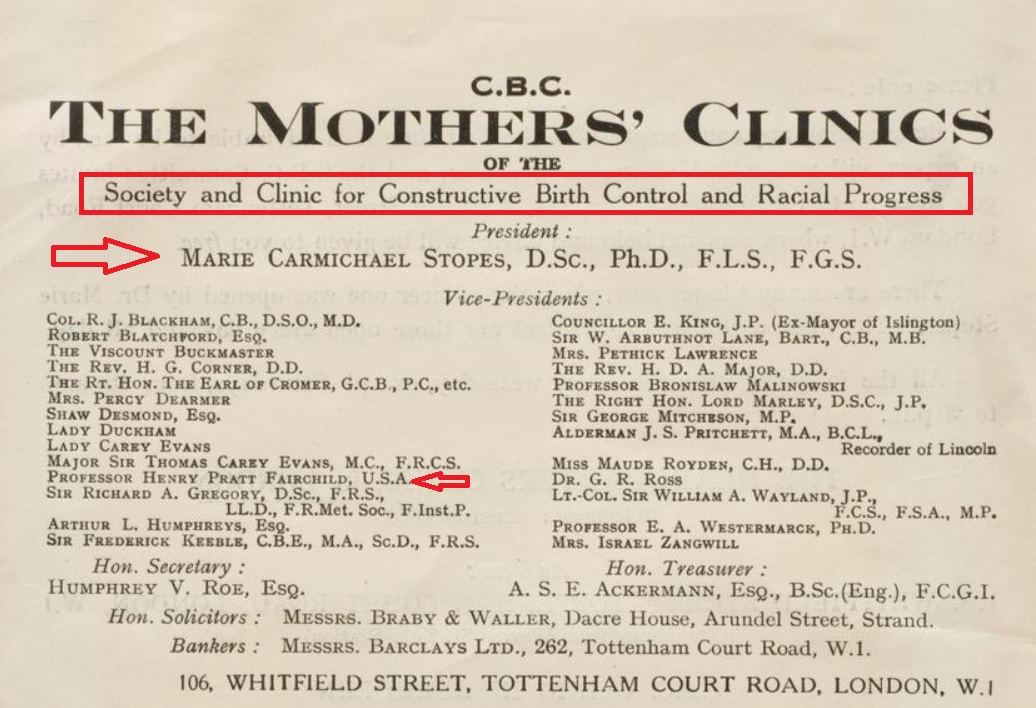 According to Dr. Brian Clowes, director of research at HLI, two of the basic principles of Stopes’ CBC were these:

The Guardian described Stopes’ eugenics views as “slightly to the right of Hitler’s.”

“Stopes attended the Third Reich’s International Congress for Population Science in Berlin in 1935, two years after Hitler became Chancellor of Germany, and long after his racist and anti-Semitic views had become well-known to the world,” HLI reported.

The UK’s Daily Mail claimed that in 1939, Stopes “sent the Nazi dictator a book of her poems enclosed with a letter saying: ‘Dear Herr Hitler, love is the greatest thing in the world,'” adding, “Her views on eugenics were also promoted by the Nazis in Germany….”

Stopes founded the National Birth Control Council, which later became known as the Family Planning Association. In 1922, Stopes began publishing her writings, which the Guardian claimed included “strong strains of racism,” in her Birth Control News. “[S]he described the southern Italians as a “low-grade race”; she was accused of anti-semitism even by her birth-control allies; and in a stinging attack on the French who, in the early 1920s tightened their laws against contraception, she said that if they really wanted to repopulate their nation, they should ‘eliminate the taint of their large numbers of perverted or homosexual people,'” the Guardian wrote.

Madeleine Simms, Research Fellow of the Eugenics Society, published a 1975 piece about Stopes in the Journal of the Royal College of General Practitioners. She claimed Stopes was the first person to use the phrase ‘compulsory pregnancy’ and described Stopes as an “elitist” who was not “wholly free of old fashioned eugenicist prejudice.”

“She was in favour of “stemming the on rush of those who are a total loss to the state” and of replacing them with those who “originate in good homes,” Simms wrote. Stopes initially opposed abortion, but according to Simms, “recognised clearly that in the absence of birth control, abortion was every woman’s lot.”

According to online history at the Online Archive of California (OAC), Stopes was influenced by Margaret Sanger. “Sanger had fled to Britain in 1915 after she had been charged for publishing in her newspaper an ‘obscene and lewd article’ that offered advice on birth control. In London she met Marie Stopes. After hearing Margaret Sanger’s story Stopes decided to start a birth-control campaign in Britain,” OAC wrote.

Like Sanger, Stopes favored compulsory sterilization, stating in her 1921 book, “Radiant Motherhood,” that she and others like herself “would like to see the sterilization of those totally unfit for parenthood made an immediate possibility, indeed made compulsory.”

“Stopes also railed against a society that “allows the diseased, the racially negligent, the thriftless, the careless, the feeble-minded, the very lowest and worst members of the community, to produce innumerable tens of thousands of stunted, warped and inferior infants,” Clowes noted.  She claimed, “We as a race slide at an ever increasing speed towards the utter deterioration of our stock.”

In her book, “Wise Parenthood,” Stopes bemoaned the “thriftless who breed so rapidly” who would “bring forth children who are weakened and handicapped by physical as well as mental warping and weakness, and at the same time to demand their support from the sound and thrifty.” She added, “It is indeed most serious for any race… when less than half the population is ‘physically unfit’ even when fitness is judged by the comparatively low standard of present-day needs.”