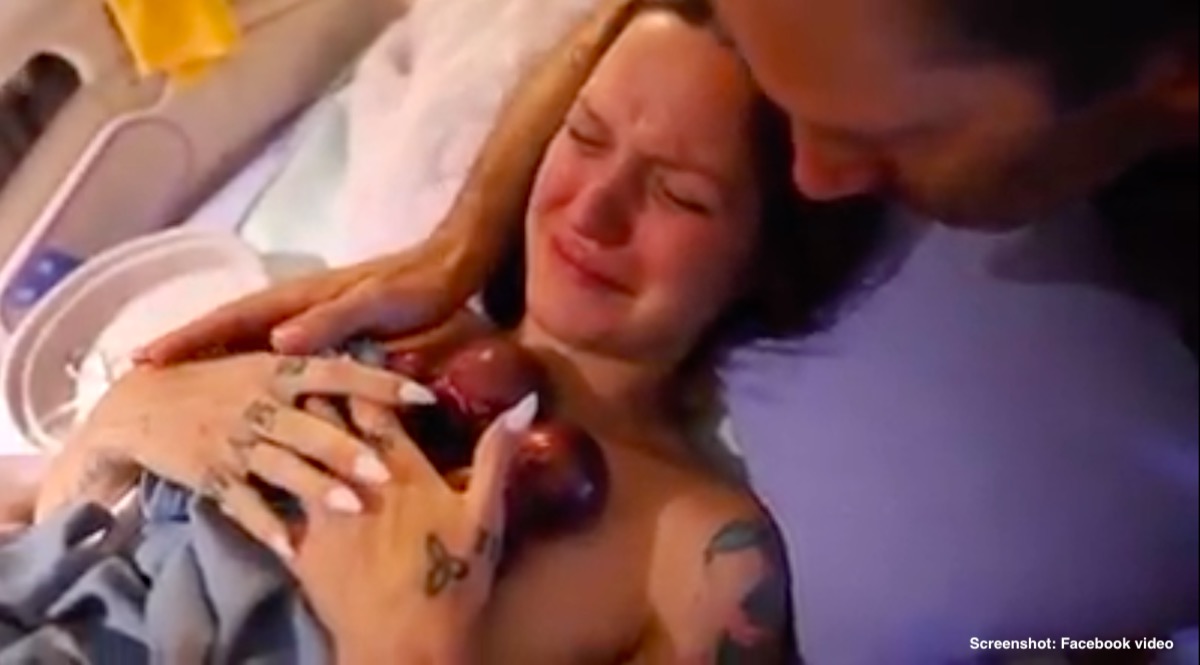 Just 11 days after celebrating their preborn twins at their baby shower, Sonia Homeak Charbonneau and her husband Roy Homeak faced the devasting loss of their babies to premature birth at 21 weeks gestation. They want their stories to be heard in the hope that hospitals will consider providing medical assistance to help babies like theirs.

At 15 weeks gestation, Homeak Charbonneau begin to experience “a major bleed” and went to the hospital believing she was suffering a miscarriage. She explained on Facebook that an ultrasound revealed her preborn babies were doing well but that she had a large subchorionic hemorrhage. She was sent home on modified bed rest. For the following six weeks she was careful about taking every precaution she could to protect her babies, but on July 21 at about 21 weeks gestation, she experienced another large bleed and began to have contractions. She returned to the hospital.

“[T]hey put me on progesterone and bed rest explaining to us that if the babies were born before 23 weeks they would not do anything to try to save them.” Homeak Charbonneau wrote on Facebook. “They also did not want to give me the steroids to help their lungs develop until 23 weeks. We just really hoped they would stay in there!”

But after five days of bed rest, labor could not be stopped. Her boys, Thunder and Cloud, were born on July 26 at 21 weeks “tiny but fully formed except for their lungs and so perfect!!”

“I got to spend the night holding my babies,” wrote Homeak Charbonneau. “I just really don’t wanna leave them and send them away now. This is the hardest thing I’ve ever had to do. This feels like some horrible bad dream I wish I would just wake up from. My whole world is shattered and my body aches Sooooo much for my babies.”

While the babies were otherwise healthy, because it was 10 days before the “viability mark” the medical team wouldn’t give them any assistance despite the fact that babies have been known to survive and thrive when given support after being born at 21 weeks.

“My precious beautiful Boys were born 4 months premature at 21.3 weeks,” wrote Homeak Charbonneau. “They were so extremely wanted loved and cherished and they will be forever. It really makes you think though how could hospitals let all these babies die just for [guidelines] and a difference of a few days. In lots of places around the world there are 21-22 week babies who have survived and are now healthy happy children.”

Homeak Charbonneau wants the story of her sons to be shared with the world in order to honor their lives and raise awareness for miscarriage, premature birth, and infant loss. She also hopes that hospitals will begin changing what age they consider viable and help babies born earlier than 23 weeks.

“[Thunder and Cloud] deserve to be known and have their stories shared,” she wrote. “Hopefully they can help others in some way and I really hope hospitals will reconsider their viability mark.”

Thunder and Cloud are not the first babies to be denied medical care after being born at an age when they had a chance of survival. In 2018, Amanda shared the story of her premature twin boys Emery and Elliot. After experiencing bleeding at 22 weeks and two days, doctors told Amanda they wouldn’t do anything to help her boys if they were born before 22 weeks and five days. But when three days later her babies were born at exactly 22 weeks and five days, the doctors still didn’t do anything to help them despite Amanda’s pleas. Doctors stepped in to help Courtney Stensrud’s baby girl who was born at just 21 weeks, and today she is thriving. Originally, the doctor hadn’t planned to offer the baby girl assistance, but when Stensrud’s asked him to try, he agreed.

On September 26, two months after Thunder and Cloud’s birth, Homeak Charbonneau took to Facebook to remember her boys and share her struggles after being diagnosed with postpartum depression and post-traumatic stress disorder.

“Thunder and Cloud, my sweet Twin boys,” she wrote. “[…] There really are not any words that could describe enough how much we truly miss you and how sad we are not to have you both with us. I’m trying to survive but these two months have been beyond difficult. I never thought I’d have to fight so hard. The pain of living with you two is unbearable.”

October is Pregnancy and Infant Loss Awareness Month. Mothers who have suffered such a loss as Homeak Charbonneau has are often overlooked, their pain swept under the rug. These mothers – and fathers – go through what she calls “a heartbreaking shattering lonely and dark experience.” What helps, she says, is to have support and love through the pain. What helps is to know that her boys are remembered.

“It’s hard as time goes by and people stop talking about them as though they’re just something that happened in the past,” she explained. “But it’s not to us. They’re our children and we can’t stop thinking about them and crying aching for them. We’re completely heartbroken that this happened and that we don’t get to raise the amazing humans they would have been. We will forever talk about and miss our twins.”