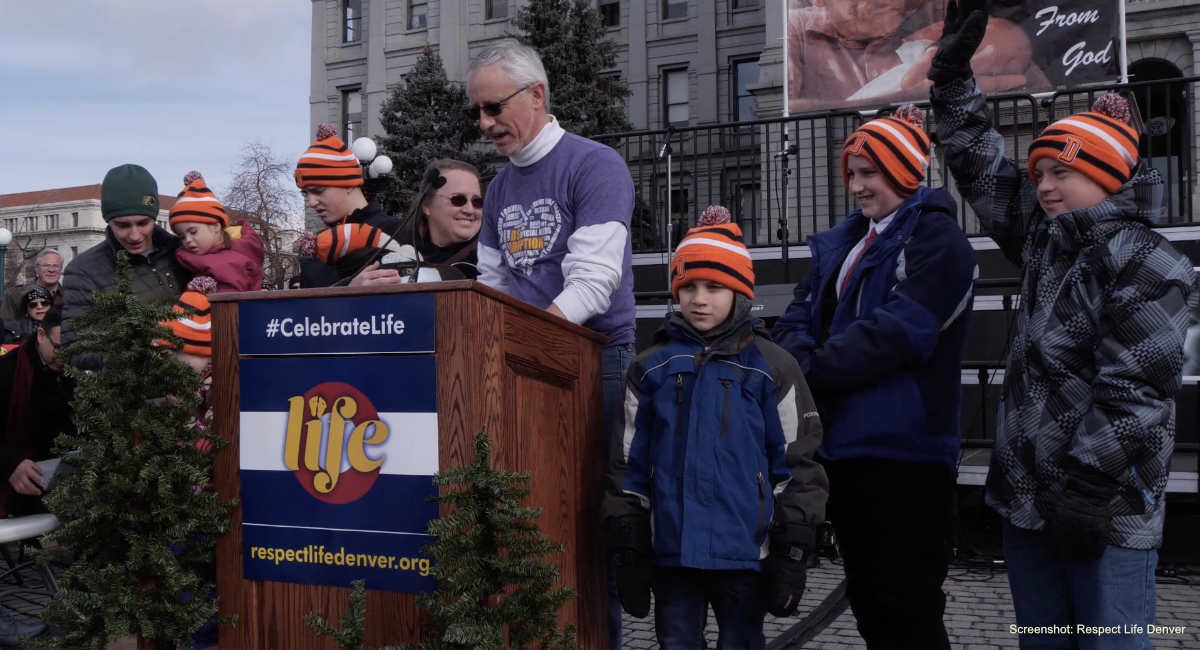 Four of the eight children in the McGarrity family have Trisomy 21, yet parents Sonia and Jeff don’t say that they have Down syndrome. Their avoidance of the term ‘Down syndrome’ is intentional. The Colorado family found that this particular label often leads to certain automatic societal assumptions about the abilities of these individuals, but limits are the last thing they want to place on their children — with or without a disability.

“While the phrase ‘Trisomy 21’ describes the medical condition of a third copy of the 21st chromosome, the ‘Down syndrome’ phrase describes certain physical characteristics, and has in large part come to convey assumptions about intellectual ability as well,” the McGarritys explained.

The McGarrity family story began when Sonia and Jeff met in 2001. Following their marriage in early 2003, Sonia and Jeff gratefully welcomed their sons Thomas and Sean in quick succession. After completely normal ultrasounds during Sonia’s pregnancy with their third son Jeffrey, the news of his presumed Trisomy 21 diagnosis just an hour after birth in 2006 took them completely by surprise.

And while Sonia had little previous knowledge of Trisomy 21, she told Colorado Parent in 2018, “I had been around children with special needs, and there was something in their parents and their siblings that was soft—something that helped them to have a compassion I didn’t see in other families. I wanted that for my family.”

The McGarritys went on to welcome Brendan in 2008 before suffering two miscarriages. Aware that they might be unable to have any more biological children, they explored adoption. Sonia felt called to reach out to the National Down Syndrome Adoption Network. In an interview with iHeart Radio, Jeff explained that their hearts were broken by the devastating statistics on the high rate of abortions for children diagnosed prenatally with Trisomy 21.

“We had gone through life with Jeffrey and kind of said to ourselves, ‘We can do this. God has given us the gifts and the support system we need to do this,” he said. “So, why not offer to parent children whose birth parents got that prenatal diagnosis but could not, for whatever reason, see themselves parenting?'”

Adopting children with Down syndrome

In 2010, Cecilia joined their family through open adoption. The McGarrity’s fifth biological child, Augustine, was born just one year later. They went on to adopt RoseMarie in 2015 and Charlotte in 2018.

Jeffrey, Cecilia, RoseMarie, and Charlotte all have Trisomy 21.

The McGarritys credit their faith community with providing financial, emotional, and spiritual support as they’ve lived out the call to special needs adoption three times.

Now, their oldest son, Thomas, is a freshman in college and their youngest, Charlotte, is in preschool. But Jeff observed the ways that their family is like any other. “In some ways, it’s like a typical family. We’ve got kids who are full of joy and also kids who are belligerent, kids who like to listen to Mom and Dad, some who don’t,” he said. “We’ve got quiet kids, we’ve got loud kids.”

He continued, “We have a few who have additional medical concerns. Our three-year-old Charlotte has had two open-heart surgeries so far, because heart defects often accompany Trisomy 21. We’re raising a big family — and oh, by the way, [Trisomy 21] happens to be part of it as well.” Each McGarrity with Trisomy 21 receives on average eight hours of therapies per week.

The family recently joined a pilot program at the Jerome Lejeune Foundation’s first satellite location in the United States, which is fortunately located in their home state. The Foundation is named after the French doctor who discovered the genetic component of Trisomy 21 and went on to become a fierce opponent of eugenic abortions based on prenatal diagnoses.

The Foundation’s Denver Medical Center contracts with Bella Health+Wellness (featured by Live Action News in October) to offer “personalized holistic medical care to children” with the diagnosis. Future plans for expansion include comprehensive care for adult patients with Trisomy 21 as well.

In an interview with the Lejeune Foundation, Sonia shared that while people with Trisomy 21 are more integrated into society than ever before, regrettably “there is still a bias in our culture, the medical community, and the educational system towards the parents, families and friends of people with Trisomy 21 regarding how the medical condition influences their capabilities.” This bias leads to unnecessary limiting assumptions with real-world impacts.

For example, their six-year-old, RoseMarie, was evaluated and determined to be capable of speaking only four-word sentences. Yet this same daughter spoke fully 21 words when she told Jeff, “Daddy, I want you to put the music on low down so when it gets louder, it won’t wake mommy up.”

Sonia stressed, “When RoseMarie’s teachers hear that her ‘average sentence length’ is four words (and even when we, her parents, hear that) it translates to an expectation that she can’t do certain things. Ridiculous! We can’t just assume that ‘four words’ — or whatever the ‘ceiling’ the world has told us – is all that our children can reach.”

Instead, Sonia and Jeff choose to have unlimited expectations for their children with Trisomy 21 just as they do with their ‘typical’ children, and they let each child show them what they’re individually capable of.

Every day, individuals with Trisomy 21 are smashing the implicit or explicit assumptions placed on them by society, whether speaking at the national March for Life, swimming the English Channel, or completing an IronMan triathlon. And while these feats are certainly major accomplishments for any individual, with or without Trisomy 21, the McGarrity family’s approach challenges us all to open wide our expectations for every individual living with Trisomy 21. By seeing each person as a unique individual with their own gifts as well as weaknesses, we make space for everyone to thrive, no matter how many chromosomes they have.