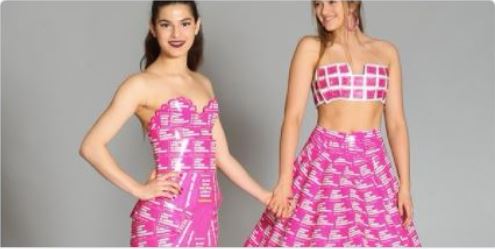 At the progressive Ethical Culture Fieldston School located in Bronx, New York, a fashion show is held each year in which no fabric is allowed to be used to create the handmade clothing. This year, two teenage girls decided to make a statement with condom dresses and show their support for the nation’s largest abortion provider, Planned Parenthood.

Karolina Montes, 17, and Zoe Balestri, 16, are both juniors at the school and said that their goal was to educate people about Planned Parenthood.

“We’ve been best friends since 6th grade,” said Balestri. “This year we thought after everything that’s been happening in the world and with this country, it was important to make our dresses beautiful and fun but also to give them some sort of meaning. We decided this was the perfect way to support something we both strongly believe in.”

“I thought that was really funny,” Balestri said. “I actually sewed together the condoms with a needle. That took awhile, and I got lube all over my hands, which was kind of gross.”

The girls, who participated in the Women’s March on Washington, believe that Planned Parenthood is “an amazing thing” and though their school claims to create “independent thinkers” who ask “their own questions” and seek “their own answers,” it seems these girls are buying into the abortion giant’s lies without digging deeper.

If these girls really understood what they were standing for when they stood with Planned Parenthood, it’s doubtful they would want to sport these dresses any longer. In fact, if they were able to witness a late-term abortion — or really any abortion like the ones performed at Planned Parenthood — first-hand, they would likely run from the clinic. When the facts about abortion are seen and heard, young people in particular change their minds, just like the ones in the video below. (See more here.)

The fact that two girls, who are just barely old enough to drive and not old enough to vote or drink, handle condoms with humor and find Planned Parenthood’s business practices “fun” is saddening. It shows just how brainwashed young people have become regarding sex, abortion, and Planned Parenthood. Too many of them now believe sex is just a part of the routine of life — even as preteens — and that abortion is a simple solution when something goes wrong. Many fail to realize, due to the teaching and culture surrounding them, that pregnancy is meant to result from sex, and that the creation of new life is not or “terrible” or “life-ending.”

The most recent undercover video about Planned Parenthood shows abortionists laughing when one says, “An eyeball just fell down into my lap, and that is gross!” (See it here.)

The reality is that Planned Parenthood facilities are closing in rapid form around the country, and the incidences of staff calling for emergency help after abortions at Planned Parenthoods are rising. Planned Parenthood has been caught aiding sex traffickers, profiting from the trafficking of fetal body parts, participating in Medicaid fraud, failing to report the rapes of children, and covering up the sexual abuse of minors.

While Planned Parenthood’s market share of abortion in the U.S. has been rising (now at 35.4 percent), the number of legitimate health care services which the abortion corporation provides is declining. In fact, cancer screenings at Planned Parenthood have dropped 69 percent since 2004. The video below shows, based on statistics, what Planned is really all about:

With a marketing plan that involves persuading younger and younger people to have sex — and then abortions, it’s no wonder teens fall victim to Planned Parenthood’s agenda. Anyone who thinks of the abortion giant as “fun” is completely blind to the truth, and as teens, they likely have the adults in their life to thank.