A 14-year-old girl, who appeared to be stunned and desperate according to a witness, walked into a Jersey City restaurant with a newborn baby. The teen mom handed the child to a customer and then left.

“This lady comes in looking very desperate, holding a brand newborn child, you can even tell,” El Patron restaurant owner Frankie Aguilar told NBC. “She comes in, she looks at me in the eye, I look at her and she has these eyes of terror and despair.”

Aguilar’s father called 911 while customer Alease Scott, a former therapist and preschool teacher, jumped up from her table to help the girl. She could tell that the baby and the young mother were both in distress. Surveillance video shows Scott and the teenage girl standing next to each other and after Scott walked to a chair to look over the baby, the young mother exists the restaurant. 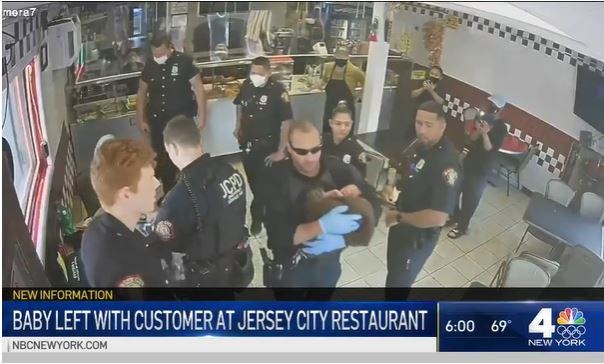 “The baby wasn’t really moving that much,” said Scott. “[The mother] went to the counter, she said she needed help. I got up from the table, I immediately walked over to hear and I said, ‘You mind if I check the baby’s vitals?’ So she readily handed the baby over to me. I noticed the baby still had matter on it from being born, in the hair and the ears. It wasn’t cleaned off properly.”

The girl had told Aguilar that the baby had been abandoned, but Scott then noticed dried blood on the teen’s leg and realized that she was the baby’s mother. As she focused on making sure the baby was breathing, the teen mother left. Aguilar called it “heartbreaking.”

Scott explained that she gave the baby girl oxygen and within seconds she let out “the most beautiful cry that you’ve ever heard.” Her feet then started moving.

READ: Traumatized by a past abortion, she was unable to hold her newborn son

Police arrived and took the baby to the hospital. They were also able to quickly locate the teen mom who was also taken the to hospital. Both are reported to be doing fine.

In order to save newborn babies from being abandoned or killed, every state has enacted a Safe Haven law to allow mothers to legally and anonymously surrender their baby of a certain age at a safe location such as a fire station or emergency room. Though controversial, according to the National Safe Haven Alliance, the laws have saved at least 3,500 lives and prevented horrific tragedies. Though, in this case, the baby was not taken to a designated Safe Haven location, the teen mom will not face charges because she made sure her baby was in safe hands.