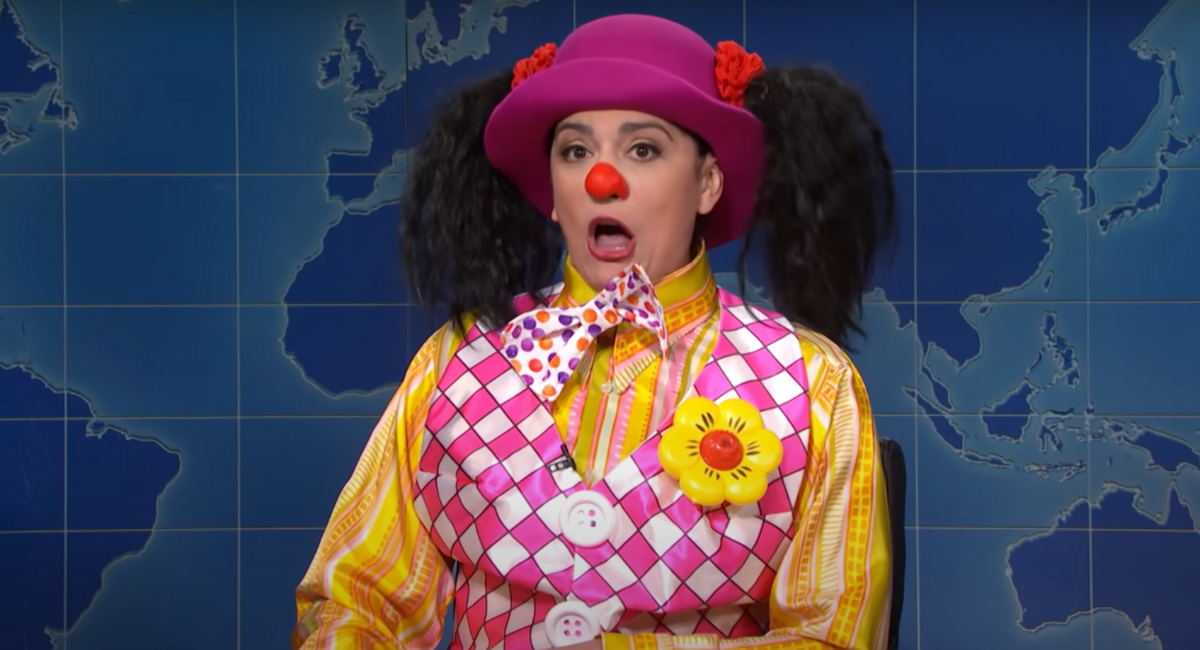 This weekend, Saturday Night Live (SNL) cast member Cecily Strong appeared in a skit during the show’s “Weekend Update” segment, defending abortion while playing a character named Goober the Clown. Oddly, the character of Goober appeared to have been modeled after a clown appearing in a children’s show titled “The Big Comfy Couch,” a strange choice for a rant about abortion.

Appearing alongside Colin Jost, Strong was introduced to discuss Whole Woman’s Health et al. v. Jackson et al., the Supreme Court case which will decide the fate of the Texas Heartbeat Act, with Jost’s introduction repeatedly noting that “Goober the Clown” had an abortion when she was 23.

“I had an abortion the day before my 23rd birthday!” she began. “Well, actually, I really don’t [want to talk about abortion]. But people keep bringing it up, so I gotta keep talking about freaking abortion. But it’s a rough subject, so we’re gonna do fun clown stuff to make it more palatable. Whee! Hey, who wants a balloon animal? You want a giraffe? … And I wish I didn’t have to do this because the abortion I had at 23 is my personal clown business. But that’s what some people in this country wanna discuss all the time, even though clown abortion was legalized in Clown v. Wade in 1973.”

After failing to make a balloon animal, Strong continued to say how common abortion allegedly is.

“Did you know that one in three clowns will have an abortion in her lifetime?” she asked. “You don’t, because they don’t tell you. They don’t even know how to talk to other clowns about it, because when they do talk about it, if you were a clown who wasn’t the victim of something sad like clown-cest, they think your clown abortion wasn’t a ‘righteous clown abortion.’ I mean, what the d*ck is that?!”

After that, Jost chastised her, saying they couldn’t use profanity on the show.

“It’s funny, Colin, we’re having fun — just laugh, pull my finger,” she said. “Laugh! I need it! I need you to laugh so hard, like the way I laughed when the doctor asked if I got pregnant on my way over to the clinic because I wasn’t very far along. Not like a funny-haha joke, but like, in a funny, you’re not an awful person and your life isn’t over joke. A-honka honka!”

Finally, Strong claimed that abortion allowed her to have a successful career as a comedian… where she joked about abortion on national television.

“Here’s my truth,” she said. “I know I wouldn’t be a clown on TV here today if it weren’t for the abortion I had the day before my 23rd birthday. Clowns have been helping each other end their pregnancies since the caves. It’s gonna happen so it oughta be safe, legal and accessible. We will not go back to the alley. I mean, the last thing anyone wants is a bunch of dead clowns in a dark alley.”

Unsurprisingly, the skit was applauded by the media, who described it as “powerful,” “poignant yet hilarious,” “extraordinary,” and “bizarre and brilliant.”

Strong hasn’t confirmed one way or another, but it has been assumed by some that the “clown abortion,” described that way to make it more “palatable,” may have been Strong’s personal story of having an abortion at 23. Destiny Herndon-De La Rosa, founder of New Wave Feminists, responded by saying that the skit merely showed that someone had failed Strong, by making her believe she needed abortion to be successful:

Yeah, it was about “clown abortion,” but was it really? It appeared more like Cecily Strong was telling her own story of having to sacrifice her child in order to have the career she has now. I think she’s amazing and brilliantly funny, but instead of laughing, my heart was breaking for her throughout this whole skit… and it was also breaking for all the little girls who will see this and hear, “You can’t actually have it all. Making it big on SNL could cost you your child.”

Maybe I’m wrong. Idk her story. But that was my take away. We have to do better by women in comedy and in this country. While she’s incredibly funny and talented, I don’t think Cecily Strong’s a “clown.” I agree with my friend, she’s a woman who was failed at some point.

Though it wasn’t meant to be funny, actress Michelle Williams similarly credited her success to her own abortion while accepting a Golden Globe award last year. In both instances, the reality of abortion, and how it harms women, was ignored.

One of the most heartbreaking, tragic things in the world is a woman declaring that she is now empowered & successful because she was able to kill her unborn child.

You cannot build a beautiful future on the dead body of a child.

All too often, women are coerced into abortion, and pregnancy discrimination is still widespread. It’s even worse in Hollywood, where women face frequent pressure to have abortions. As the case of Harvey Weinstein shows, powerful men in Hollywood frequently prey on and abuse women, and then rely on abortion to cover up their crimes.

Yet other women, despite insistences from Strong and Williams that abortion is necessary to succeed, are proving that women can be mothers and still achieve their dreams. Renee Elise Goldsberry tearfully thanked her husband and children after winning a Tony award for her role as Angelica Schuyler in “Hamilton”; she said this proved that she could be a mother and still win. Catherine Zeta-Jones was pregnant while filming her role as Velma Kelley for “Chicago,” and then won an Oscar, which she accepted at nine months pregnant. Gal Gadot was an unknown actress before she became Wonder Woman, and was five months pregnant during filming.

Making women believe they need abortion to be successful is not feminist; to the contrary, it upholds patriarchal institutions, and allows women to continue to be used, abused, and disempowered. There is no incentive to change if abortion is legal. Women shouldn’t have to choose between their children and a career, and people like Strong should be demanding better.