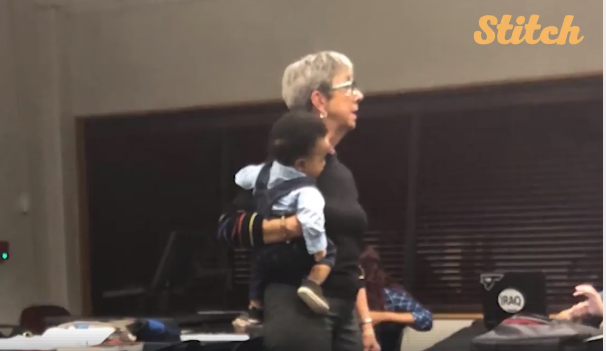 Jarquita Arrington is an MBA student at Savannah State University and she is also, like many women on campus, a mother. She scheduled her classes for times when she knew her husband would be home, but she worried when her husband had to work late on what was to be her first day of class. With no other option for someone to care for the children, Arrington decided to email her professor, who ended up going above and beyond to help.

“Ohh, it’s the first day of class. I can’t miss class,” said Arrington in a video for Stitch. “So I immediately reached out to Dr. Setliff via email.”

Dr. Rebecca Setliff understood the situation and allowed Arrington to bring her seven-month-old son Panda to class with her. During class, when Panda began making baby noises and distracting his mother, Setliff asked if she could take the baby to try and quiet him down.

The professor then held Panda through the rest of the class, allowing Arrington to take notes and focus.

“I wanted to help her and I wanted her to be able to focus on being comfortable with staying in the class and listening to the discussion and the content because my classes are heavy discussion classes,” said Setliff.

Setliff is not alone in her willingness to help the students at Savannah State University. Arrington chose the college because faculty members there are committed to helping their students succeed despite the fact that their lives are filled with much more than school.

“We as faculty need to remember that, and work with them to make sure they get to the classes just like a job,” said Setliff.

Universities across the country and around the world should take note of Setliff’s ability to understand her students’ unique situations and lives. While pro-abortion groups such as Planned Parenthood fight for college students to have access to abortion, it is people like Setliff who know that women are able to be mothers while also working on their degrees or at their jobs. Sometimes they just need a bit of help.

Pro-abortion organizations will say that women in college should have the choice to abort or to keep their children, but if college campuses lack understanding professors, on-campus daycare, housing for families, or health insurance for students, and if professors stick to overly strict attendance rules, then women who become pregnant in college don’t have much of a choice at all. They feel pressured to abort their children.