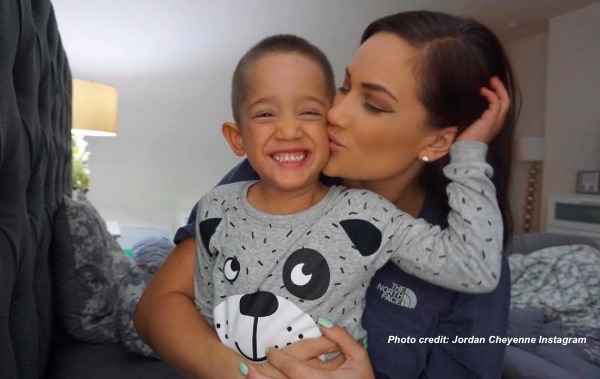 As Live Action News previously reported, vlogger Jordan Cheyenne’s son Christian – who spent 100 days in the NICU after being born at just 24 weeks and weighing a single pound — is the joy of her life. Single mom Jordan’s story has already led to at least one life being saved, she says in a recent video.

Jordan explains how she had talked on video about life as a single mom. Towards the end of the video, she answered a question on how to recognize real love. In answering this question, Jordan says she immediately thought of Christian, now 4-1/2 years old, healthy, and very active (as can be seen in some of Jordan’s videos and in the photo at the top of this article). She says she knows that real love exists because she had a child and felt a kind of love that surpassed anything she’d felt before — the “purest form of love.”

Shortly after posting this video, Jordan says she received a message from a woman claiming that the video had saved a life. Jordan was initially confused, not sure how her video could have accomplished that. But as the woman continued, Jordan was deeply moved.

The woman explained that a friend of hers was pregnant; the father did not want the baby and was pressuring her to abort it. The woman said she sent Jordan’s video to her friend. The friend reportedly changed her mind and chose life after hearing about Christian and how much of a positive impact he has on those around him and the love between Jordan and her son. The friend reportedly said the deep love Jordan described having for Christian is a feeling she doesn’t want to miss out on, leading her to abandon her plans to abort her baby.

Jordan says this encounter affected her deeply, and she’s thankful that her video played some role in saving a life. Although she doesn’t personally know the woman who sent the message or her friend, she’s happy that another mother will get to experience the love of her child.

Jordan encourages fans to use social media less for trivial things and more for good — for helping others — as she did by sharing Christian’s story.

Jordan and the other mother who canceled her abortion are not the only women to realize their inherent strength, even when others fail to support their motherhood. Another woman who refused to abort her daughter, despite opposition from her boyfriend and her parents’ disapproval, wrote this to encourage other mothers debating what choice to make:

I know your scared. I was so scared and my ex wouldnt even let me tell my friends. I felt so alone, but when I finaly told them I got so much support and my best friend even went with me to tell my parents. Sometimes you need that buffer. … I would at least listen to your baby’s heart beat. That literly chanced my mind completly. …

I even went with my ex-boyfriend (the father of my daughter) to the first appointment to get an abortion. But as soon as I heard her heart beat I knew I couldn’t do it. My boyfriend pressured me but I knew that no matter what even if I gave her up for adoption at least she would be alive. …

I didn’t want my mom to know either and I hid my pregnecy from my parents actually till about a few weeks ago. (I’m 6 months pregent now). It didn’t go well, so I understand how hard it is. I’m not even on speaking terms with my parents. But at least I know that my daughter will have my love no matter what.

My ex is bearly in the picture only coming around when he feels like it. The are places that can help you. my advice would be to at least hear your baby’s heart beat. Belive me it is probley the most amazing thing I have ever exsperinced and the reason I am now going to raise my daughter on my own with out my parents or her dad. …

Editor’s Note: For more simple ways on how you can help save lives, check out “5 ways to help end abortion from your couch.”