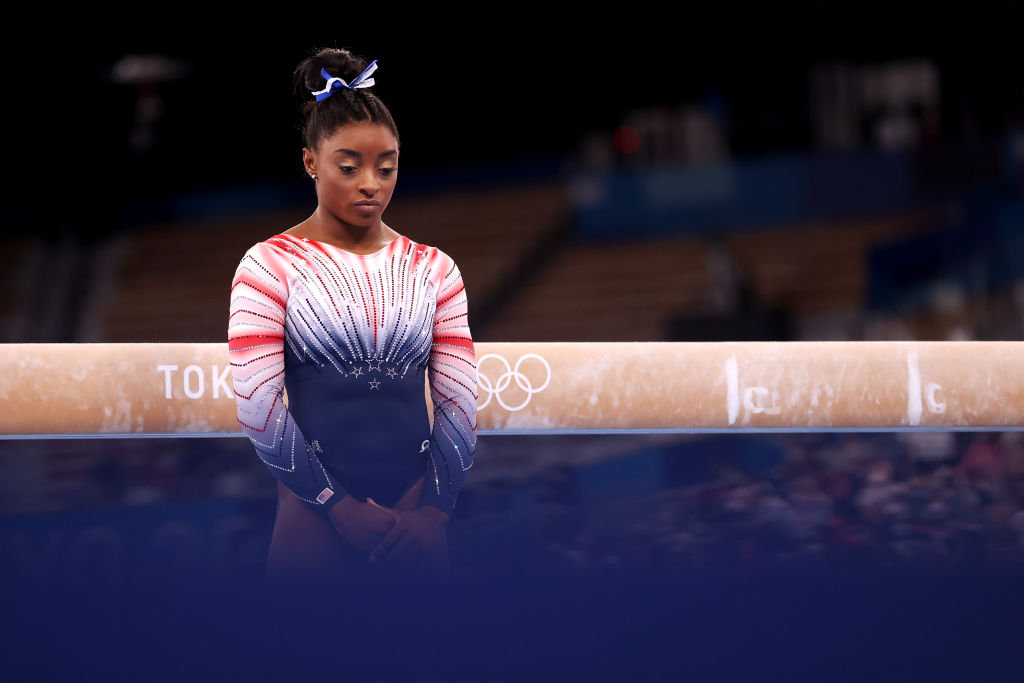 UPDATE, 8/11/21, 3:39 p.m.: Simone Biles has responded to controversy created by her Instagram story, lashing out at some on Twitter, claiming her comments about being “very much pro-choice” and painting both adoption and foster care as “expensive” and “tough” were not meant to say that abortion is a good alternative to foster care. She tweeted: 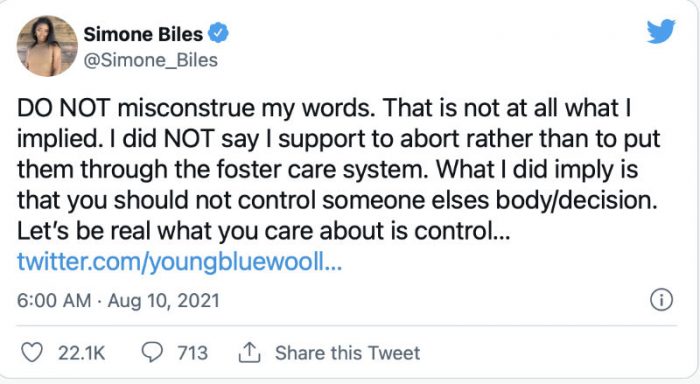 And yet, in her remarks, Biles appeared to simply reiterate her support for abortion by encouraging women to do “whatever feels fitting for YOU,” while claiming commenters were “twist[ing her] words.” TODAY reported:

“DO NOT misconstrue my words,” she wrote. “That is not at all what I implied. I did NOT say I support to abort rather than to put them through the foster care system. What I did imply is that you should not control someone elses body/decision. Let’s be real what you care about is control…

“I have forever & will continue to support foster kids. AS I WAS ONE. I’ve been an advocate for foster kids and the system but you wouldn’t know that because you don’t follow me, you just like to open your mouth.

“Also if you have a fake account don’t even talk to me. Y’all piss me off to no end. I’m done because you’ll twist my words however it feels fitting to spew hate. Also if anyone is seeing this just know I support you doing whatever feels fitting for YOU.”

8/10/21, 6:28 a.m.: Olympic gymnastics superstar and former foster child Simone Biles announced in a post to her Instagram stories that she is “very much pro-choice” and appeared to argue that because adoption and foster care can be difficult, preborn children are better off dead.

Biles, widely acknowledged as the greatest gymnast of all time, just finished what is widely believed to be her final Olympics in Tokyo. She is the most decorated gymnast, male or female, of all time, and is the only woman to ever land a Yurchenko double pike vault, a skill only a handful of men have accomplished. She also overcame a difficult background to achieve what she has, including time in foster care and surviving sexual abuse at the hands of Larry Nassar, the former team doctor for the United States women’s national gymnastics team.

On Instagram, Biles prompted her followers to send in their “unpopular opinions,” to which she would then respond. One person wrote in that “abortion is wrong,” and Biles — who has stated that she is Catholic — didn’t hold back in her response.

“I already know this is gonna start the biggest argument and may even lose followers BUT. I’m very much pro-choice,” she wrote. “Your body. Your choice. Also for everyone gonna say ‘just put it up for adoption,’ it’s not that easy and coming from someone who was in the foster care system TRUST me. Foster care system is broken and it’s TOUGH. Especially on the kids and young adults who age out. And adoption is expensive… I’m just saying. And don’t even come at me if you couldn’t keep a mask on. Or refused to wear one.”

Biles’ birth mother reportedly struggled with addiction, and when she was just three years old, she and her siblings were placed in foster care. “Although I was young when my foster care ordeal began, I remember how it felt to be passed off and overlooked,” she wrote in a CNN op-ed. “Like nobody knew me or wanted to know me. Like my talents didn’t count, and my voice didn’t matter.”

Eventually, Biles’ grandparents — who eventually adopted her and became her parents — discovered how bad Biles’ situation was at home with her mother. “I remember we didn’t really have a lot of food. We were always hungry,” Biles told 60 Minutes. “And we went to, like, my Uncle Danny’s house. And they gave us cereal. But we didn’t have any milk, couldn’t afford milk. So we just put water in it. And he was like, ‘Look, it’s the same thing.’ And we were like, ‘Nope, it’s not, but okay, nice try.’”

Though there is no doubt that the foster care system is broken, and that circumstances leading to adoption can include trauma for those involved, these are never reasons for intentionally killing a child before birth. Biles herself is proof that living in a foster home doesn’t mean a person’s life isn’t worth living, or that there cannot be excellence in that person’s future. By using foster care as an apparent excuse to support abortion, Biles is essentially arguing that it’s better for someone to be killed than to go through foster care, when she knows first hand that this isn’t true.

Live Action founder and president Lila Rose called Biles’ Instagram post “Incredibly sad and awful. To have overcome a broken system as triumphantly as [Biles] has— yet wish death for other kids bc they may face foster care is beyond fathoming.” Rose added, “Fight for foster care kids, make life better for them — don’t wish for their mothers to end their lives before they’ve even had a chance to live.”

Simone Biles just announced on Instagram that she is very “pro-choice” because “the foster care system is broken.” Incredibly sad and awful. To have overcome a broken system as triumphantly as she has— yet wish death for other kids bc they may face foster care is beyond fathoming

In fact, all children deserve to live and grow, and have the chance to become anything they want to be… just like Biles did, with the help and support of those around her who valued her life.

“Baby Olivia,” the newest video released by Live Action, reveals the humanity of preborn children from the moment of fertilization. Preborn children are not mere “concepts” or “potential ideas.”

When Simone Biles talks about how she is “pro-choice,” she means that she thinks killing children like Olivia — children just like herself while she was still in the womb — is acceptable. But killing is never a solution to any societal problem.

Abortion does not empower women or free them from trauma; it is a sign of how society continues to fail them.

Editor’s Note, 8/10/21: This article was been updated since its original publication.