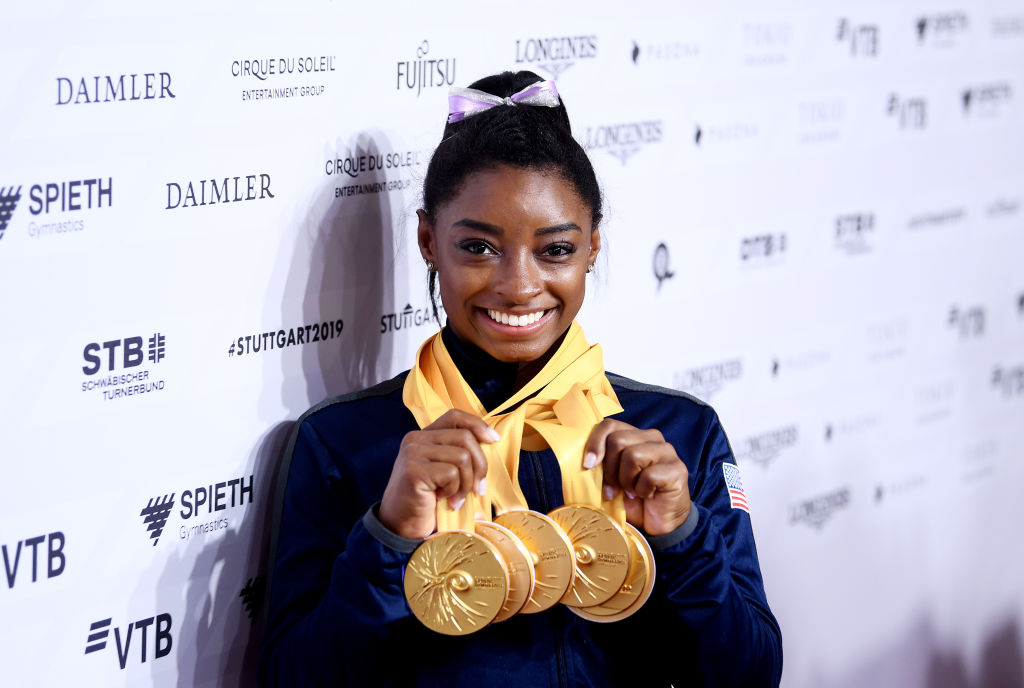 This month, Simone Biles became the most decorated gymnast of all time when she earned five gold world medals at the World Championship on October 13. She took home five of the six golds won in Germany that day for team competition, all-around, vault, floor, and beam. She’s also a former foster child and says her parents were very “brave” to adopt her and her sister.

In a 2018 Op-Ed for CNN, Biles wrote that people often ask her how she went from foster care to Olympic star. She says it took a mix of hard work, talent, and seeing the right opportunities and taking them when she was able. She also noted that without the people who saw her talent and encouraged her, she never would have been a gymnast. Two of those people are her adoptive parents.

“My mom means the world to me, and obviously I wouldn’t be here without her,” she said in an interview with CNN. “[…] They took a big step in their lives with adopting two new little girls into the family. So I think that was very brave of her.”

Biles’ birth mother struggled with addiction and when Biles was just three years old, she and her siblings were taken from their mother and placed in foster homes. For three years, they bounced from home to home, never feeling as though anyone saw them. Then her grandfather and his wife stepped up to adopt Biles and her sister.

“Although I was young when my foster care ordeal began, I remember how it felt to be passed off and overlooked,” she wrote. “Like nobody knew me or wanted to know me. Like my talents didn’t count, and my voice didn’t matter.

There are currently over 400,000 children in the United States foster care system. Most are waiting to be reunited with their birth parents, while just over 100,000 are eligible for adoption. Many prospective adoptive parents are waiting for a newborn to adopt, rather than a child from foster care. However, for every single newborn placed for adoption, there are 36 parents waiting. Thousands of children in foster care deserve a chance to have a good family instead of aging out of the system and never having a place to call home.

Biles knows that if weren’t for her adoptive parents she wouldn’t be the person she is today – the most decorated gymnast in history. As for children who are in foster care waiting to be adopted, she knows that they have talents still yet to be discovered.

“They simply lack the support, and often the financial resources and opportunity to realize their potential,” she wrote. “[…] My road to success began the day my grandfather and his wife officially adopted my sister and me.”

“But if we invest in foster care children, they, too, can have the opportunity to succeed,” said Biles, ” — which in turn strengthens our communities, economy and society.”