Lawyers for The Satanic Temple (TST) have sent a letter to the Food and Drug Administration (FDA) demanding that it grant TST access to dispense abortion drugs for use in “sacramental settings” for Satanic “abortion ritual[s].”

The Temple is requesting that the FDA “directly supply Satanists who wish to undergo an abortion in a religious context with these abortifacients.” The group is fundraising online for its legal battle.

TST’s general counsel Matthew A. Kezhaya sent the “demand letter for mifepristone and misoprostol” to the FDA, identifying the Satanic organization as “an IRS-recognized atheistic religious corporation,” writing, “I write in regard to the prescription requirement in the risk evaluation and mitigation strategy (‘REMS’) for mifepristone and misoprostol… TST seeks a religious exemption for its membership to these requirements.”

In 2020, the Satanic Temple began filing lawsuits, claiming that restricting abortion is a restriction on its practice of a “religious abortion ritual.”

Under the FDA’s safety requirement (REMS), women can only obtain the abortion pill with an in-person visit to a certified prescriber of the drug. To become certified, prescribers must have the ability to accurately assess the duration of a pregnancy and diagnose an ectopic pregnancy. Removing these safety protocols will put women at greater risk.

According to TST’s demand letter, “TST’s membership uses these products in a sacramental setting. The Satanic Abortion Ritual is a sacrament which surrounds and includes the abortive act,” the letter states. “It is designed to combat feelings of guilt, doubt, and shame and to empower the member to assert or reassert power and control over their own mind and body.”

The letter goes on to claim, “The REMS prescription requirement substantially interferes with the Satanic Abortion Ritual because the Government impedes the members’ access to the medication involved in the ritual.” 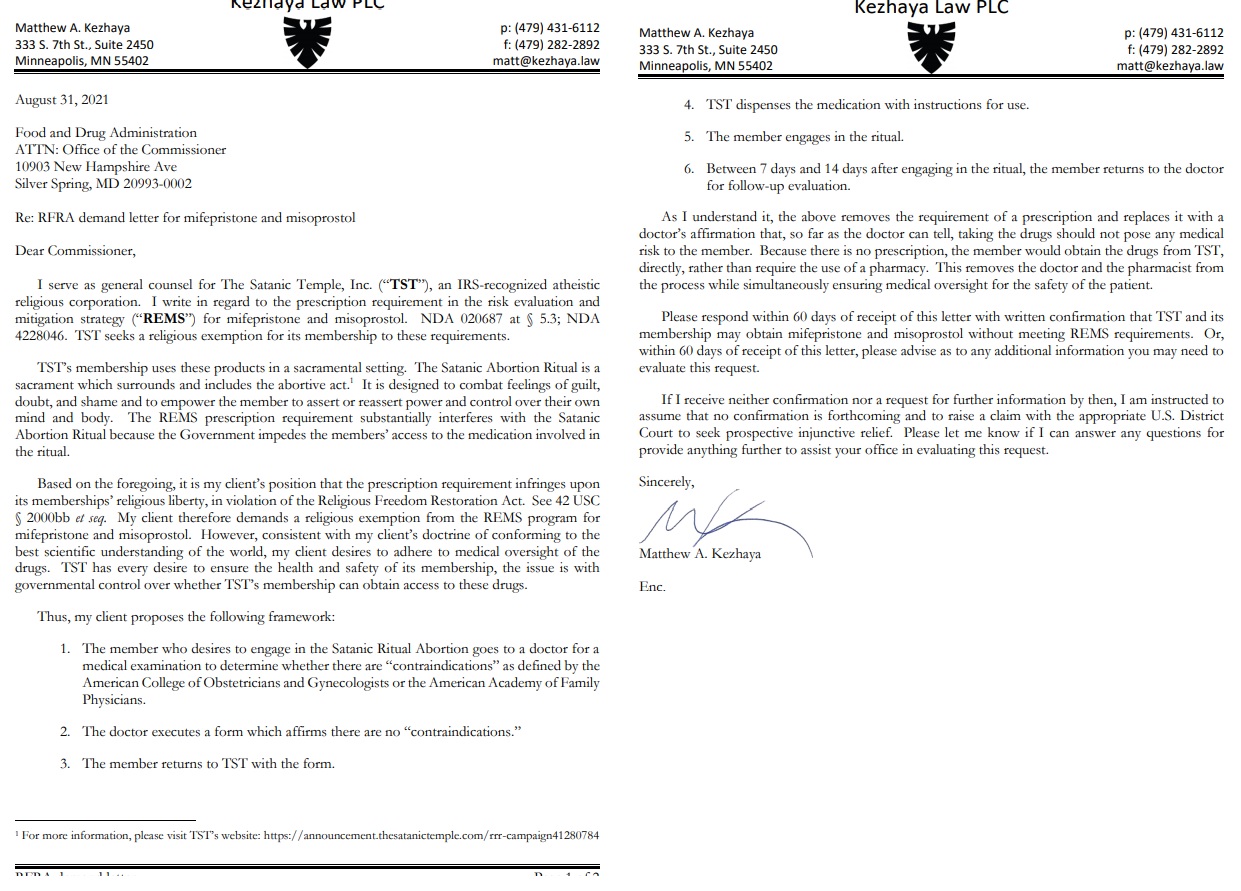 FDA letter on abortion pill REMS from The Satanic Temple

TST laid out the plan for how it would dispense the abortion pills, writing online, “TST’s ritual requires a medical examination to determine whether there are ‘contraindications’ to obtaining an abortion…. A Satanist then returns directly to TST with a physician’s certification that there are no contraindications, and TST will directly supply the member with the abortifacients so that they may participate in the ritual.”

The Satanic Temple blasted the demand letter out to supporters in what it called a “major announcement.” The Temple is asking supporters to help it “raise $200,000” for “new, bolder campaigns” on “reproductive rights.” It stated plainly that it wants “unfettered access to abortifacients for its religious use.”