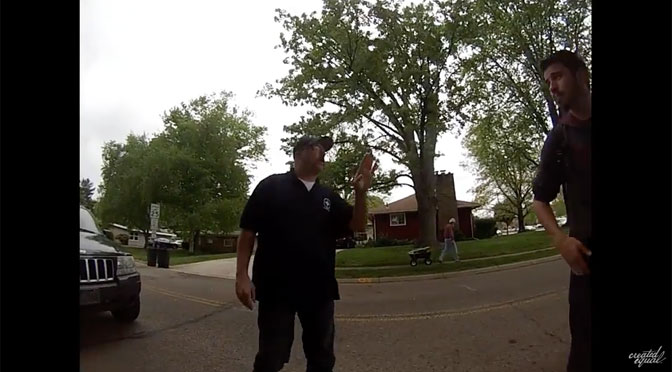 Ian Spencer, the outreach coordinator for Created Equal, was with a team of pro-lifers at Gahanna Lincoln High School in Columbus, Ohio, when they became the victims of pro-abortion violence. As they prepared to discuss the issue of abortion with high school students, a man approached them, angry that they were showing photos of preborn babies that had been victims of abortion. He soon physically attacked them, all while screaming, “This is not violence!”

Despite the man’s insistence that he was not physically assaulting anyone, he did seem to feel that he had the right to infringe upon the Created Equal team’s right to free speech, and to make threats against them. Police evidently didn’t agree with the pro-abortion activist, either — he was cited with a fourth degree misdemeanor for disorderly conduct. Created Equal Director Mark Harrington responded to the assault by saying that his team would never be intimidated or silenced by violence:

It seems increasingly common for abortion advocates not only to dissent to our message but also to resort to violence. In defending the violence of abortion, abortion advocates use violence to intimidate preborn defenders. We take every lawful measure to ensure the safety of our team members. However, we understand these kinds of attacks are inevitable. We will never be silenced by violence or threats of violence.

Sadly, Harrington is correct. Despite the insistence from the pro-abortion lobby that pro-lifers are violent, pro-life activists don’t make a habit of resorting to violence, and whenever someone does act in a violent manner, they are condemned by the pro-life movement.

Violence is sadly common when it comes to pro-abortion advocates, though. A Created Equal team was assaulted last October. Teenager Thrin Short was assaulted by Mireille Miller-Young, a pro-abortion professor at the University of California Santa Barbara. A pro-life teenager who attempted to counsel a post-abortive couple became a victim of assault. Even Lila Rose, founder of Live Action, has faced pro-abortion violence. Another tactic is for pro-abortion extremists to try to run over sidewalk counselors with their car — something that has happened multiple times. Abortion clinic staffers have even tried to pour cow manure on pro-lifers.

In this incident, Created Equal will be pressing charges. We cannot let ourselves be intimidated into becoming silent, or let the pro-abortion lobby bully us into inaction. No matter how desperate their tactics may become, we must remember that countless vulnerable women and innocent preborn babies will otherwise become victims of the abortion industry if we don’t continue to work to further the pro-life message.