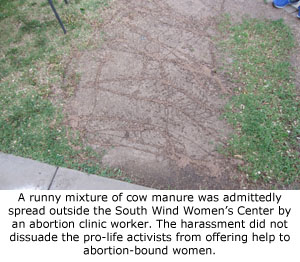 There is nothing that abortion advocates hate more than women considering abortion being given other options. That’s why they attack crisis pregnancy centers so vociferously. And it’s why they stoop to such disgusting levels to try to keep pro-lifers away from abortion clinics:

When pro-life activists showed up for their shifts on Thursday, May 8th at the South Wind Women’s Center in Wichita, Kansas, they were in for a smelly surprise. Someone poured a runny mixture of cow manure on the ground where the sidewalk counselors gather to offer help to abortion-bound women.

Mark Gietzen of the Kansas Coalition for Life, which coordinates volunteer shifts outside the South Wind abortion clinic, stated, “On Thursday, we were greeted with about 2 gallons of fresh, smelly, runny, cow manure, dumped on the ground where we set the table, and more where we set the large sign. The Wichita Haz-Mat Unit (Hazardous Materials Unit) found a person inside the abortion facility who admitted to dumping it. She claimed, only to fertilize the grass in those two areas on city property.”

Their stunt didn’t work. The pro-life activists continued to counsel and minister to women entering the abortion clinic.

Unsurprisingly, this is the clinic that employs Cheryl Chastine who has a history of making vulgar and hateful statememts. The clinic is also located in the same building that used to house Dr. Tiller’s practice, the practice that Dr. Chastine hopes to take over.

It’s interesting that abortionists complain so much about the stigma surrounding their chosen profession, that they’re looked down upon as “the lowest of the low” — yet none of them bat an eye when abortionists among them behave unprofessionally, or when a clinic worker decides to dump cow manure around the clinic. They also look the other way when abortionists like Kermit Gosnell, LeRoy Carhart, and Douglas Karpen butcher women and children on a regular basis — or worse, defend them.

Funny enough, the abortion worker who scattered the cow manure appears desperate to keep pro-lifers away. Having to resort to such underhanded tactics says a lot about how threatened they are by the pro-life movement.