Ever a font of misleading information and dangerous propaganda, Ms. Magazine has once more preached a lie-laden sermon to its pro-abortion choir. Erin Grant, deputy director of the Abortion Care Network, penned a piece arguing that pro-life laws and pro-life violence are closing independent abortion facilities; therefore, we should increase our demonstrations of support for them (though what that might look like is never defined).

Putting aside the fact that the closure of child-killing centers – no matter who runs them – is always a good thing, her argument is disingenuous at best. Her piece is a mish-mash of platitudes lacking a clear thesis.

Even the title – “Independent Abortion Providers Are on the Front Lines in the Assault on Reproductive Rights” – is misrepresentative and euphemistic, since abortions always happen after reproduction has already occurred. Therefore, restrictions on one’s ability to commit an abortion can never be accurately characterized as an “assault” on one’s right to – or not to – reproduce.

But that’s just the beginning of the chain of distortions.

Grant writes, “[P]roviders … have to … endur[e] unrelenting threats, violence, and harassment by anti-abortion extremists”; and “providers, escorts, and volunteers show up every day and put their own health and safety on the line[.]” Both of these statements are ridiculous exaggerations.

Although there have been some noteworthy and deplorable incidents of violence – including murder – perpetrated against abortionists, they are few and very far between, and have been denounced by the pro-life movement as a whole. It has been shown that incidents of legitimate violence against abortion workers have been steadily declining over the past decades. Even the National Abortion Federation’s own security staffers have been forced to admit under oath that most of the incidents they attempt to construe as “pro-life violence” are actually mere trespassing, and are not even necessarily committed with a pro-life motive.

Meanwhile, pro-abortion advocates harass, intimidate, and even attack pro-lifers on a regular basis, without a peep from the mainstream media. Escorts at the Bristol Regional Women’s Center in Tennessee, for example, have been known to attack sidewalk advocates – on video. Escorts at the Walnut Creek Planned Parenthood in California have intentionally flooded pro-life sidewalk advocates with car exhaust; at the same site, sidewalk advocates have had hot coffee thrown on them, have had their children threatened with rape, and have been physically attacked. Others have had their homes vandalized; have been assaulted with knives, guns, and molotov cocktails; have been hospitalized; and have even been murdered.

Grant states: “Abortion opponents have weaponized abortion stigma and misinformation to limit access.” She also writes, “Not only do these independent clinics have less access to funding and resources, but ideologically-driven, medically unnecessary abortion restrictions make it increasingly hard for many clinics to keep their doors open….”

Grant doesn’t specify how “abortion stigma” and “misinformation” work to “limit access” — likely because the suggestion is absurd, since human beings cannot simply think or feel things out of existence.

The second statement, however, is a more complicated animal. Grant does not specify any particular restrictions which she believes push independent abortion facilities out of business. However, stories like that of Christin Lafo – who was given the abortion pill and gave birth to her stillborn 22-week-old son after being told by a certified nurse midwife that she had a non-viable pregnancy at 6 weeks’ gestation – and Markeisha Hemsley – who suffered a lacerated cervix, a three-inch tear in her uterus, and massive internal hemorrhaging after a botched abortion performed by a nurse (who desperately tried to conceal her malpractice) — clearly demonstrate the medical necessity of regulating the abortion industry, whether they like it or not.

Ignoring the Elephant in the Corner 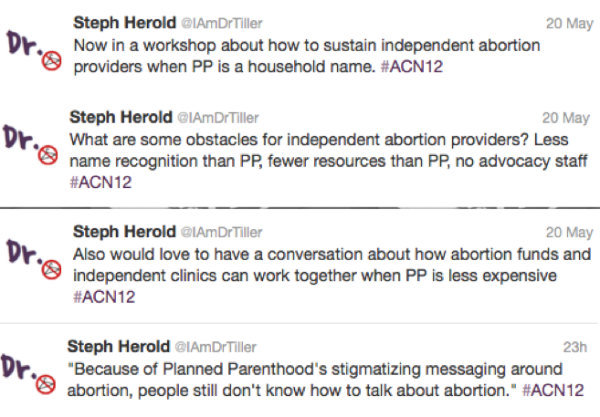 Planned Parenthood has also been opening up massive mega-facilities over the last few years, many in the immediate vicinity of independent abortuaries, creating a monolithic presence against which smaller facilities cannot compete. This easily accounts for their growing monopoly in the abortion industry – they currently enjoy over 41% of the abortion industry marketshare, up from just 9.5% in 1991.

There are indubitably abortionists who believe they are helping women by doing what they do, however, there are plenty of examples of reprehensible behavior on the part of abortionists, and painting them all with the folk hero brush is at least equally absurd and disingenuous.

Grant would have us believe that all independent abortionists provide “compassionate,” “patient-centered,” and “community-based care.” Tell that to the victims of Kermit Gosnell, Curtis Boyd, LeRoy Carhart, or Ulrich Klopfer – all of whom were independent abortionists. These men, and countless others like them, exemplify the heartlessness and senseless violence that are the defining characteristics of abortion itself.

If independent abortion facilities are closing, it’s cause for celebration, not alarm. We must never forget that abortionists kill children for money – they deserve assistance in finding legitimate employment, but they do not deserve a pat on the back for whitewashing unacceptable violence with euphemisms like “radical, community-based care.” What they do is certainly radical, and it’s unfortunately in our communities – but the only people being shown care are the abortionists themselves.