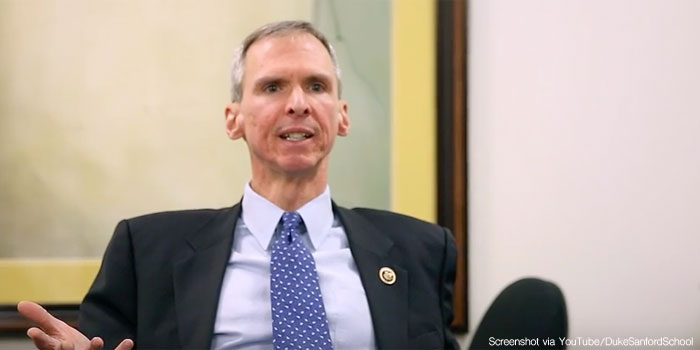 While science tells us that life begins at conception, there’s just one political party in Washington which seems to be adamantly against this science and what it means for preborn human life. Congressman Dan Lipinski (D-Ill.) is one of the few pro-life Democrats left in the U.S. House of Representatives. Because of this, he almost lost his chance to remain in the House due to a primary challenge from small business owner Marie Newman, who had the support of pro-abortion organizations and even fellow Democrats. The Democratic Congressional Campaign Committee did not get involved.

The race was called late Tuesday night for Lipinski by the Associated Press, but Newman didn’t concede until Wednesday morning, via Facebook.

Lipinski is one of three pro-life Democrats remaining in the House, along with Collin Peterson of Minnesota and Henry Cueller of Texas. That’s just 1.6 percent of House Democrats, as noted by political correspondent Steve Kornacki — just three out of 193 Democrats.

Given the scientific evidence, all politicians of all parties should be pro-life. Yet, again, only three House members of one of the major parties see this and vote accordingly. This is extreme, and is completely at odds with the beliefs of the American people, the majority of whom would limit abortion to the first trimester and/or very rare exceptions cases, and who also want abortion completely banned after 20 weeks. (Watch below as former abortionist Dr. Anthony Levatino explains a D&E, the most common second trimester abortion procedure, normally committed between 13 and 24 weeks of pregnancy.)

Together with the other two pro-life House Democrats, Lipinski sided with the majority of the American people when he supported a 20-week ban on abortion as well as a more permanent end to taxpayer-funded abortions. Lipinski is a co-chair of the Congressional Pro-Life Caucus.

According to the Associated Press, Newman regarded herself as the “true Democrat,” in part because of her support for abortion. Lipinski reportedly “has called Newman and her supporters a ‘tea party of the left’ and says their efforts to drive out Democrats with differing views will hurt the party and add to gridlock in Washington.”

Bringing the number of pro-life Democrats from three to two indeed sounds like an effort to “drive out Democrats with differing views.” A press release from Democrats for Life of America seems to concur, with executive director Kristen Day calling Lipinski’s primary victory “a win for the Big Tent Democratic Party.” Day suggested more Democrats could win seats, and that “the key to winning is a Big Tent approach of inclusion and support for candidates who represent the views of their districts.”

The Susan B. Anthony List, which supports pro-life candidates regardless of political party, supported Lipinski with money and canvassers. Marjorie Dannenfelser, president of the organization, said, “We are thrilled with Congressman Lipinski’s victory over Marie Newman and the abortion industry which is increasingly pushing the Democratic Party left on abortion. This is a win not only for Rep. Lipinski and the pro-life movement, but for the majority of Americans who support common ground pro-life policies like limiting abortion after five months.”

Newman had support from the major pro-abortion organizations, including Planned Parenthood, NARAL Pro-Choice, and EMILY’s List. Planned Parenthood and NARAL involved themselves in other recent elections, including last year’s Georgia special election, where their candidate, Jon Ossoff, lost to pro-lifer Karen Handel. Where “personally pro-life” Democrat Conor Lamb (meaning he actually votes pro-abortion) managed to defeat pro-life Republican Rick Saccone in a special election in Pennsylvania, the abortion movement did not get involved.

Despite the efforts from NARAL to pull off a victory for Newman, Democrats for Life of America pointed to one of NARAL’s own to polls that showed women, Hispanics, and African Americans preferred Lipinski.

Much has been made about how to regard Lipinski. The Weekly Standard called him “arguably the last pro-life liberal in the House,” while Day refers to him as “moderate.” The Associated Press said he’s “one of the most conservative Democrats in Congress.” Whatever he is, Lipinski shows that the pro-life position can and should transcend political party labels.