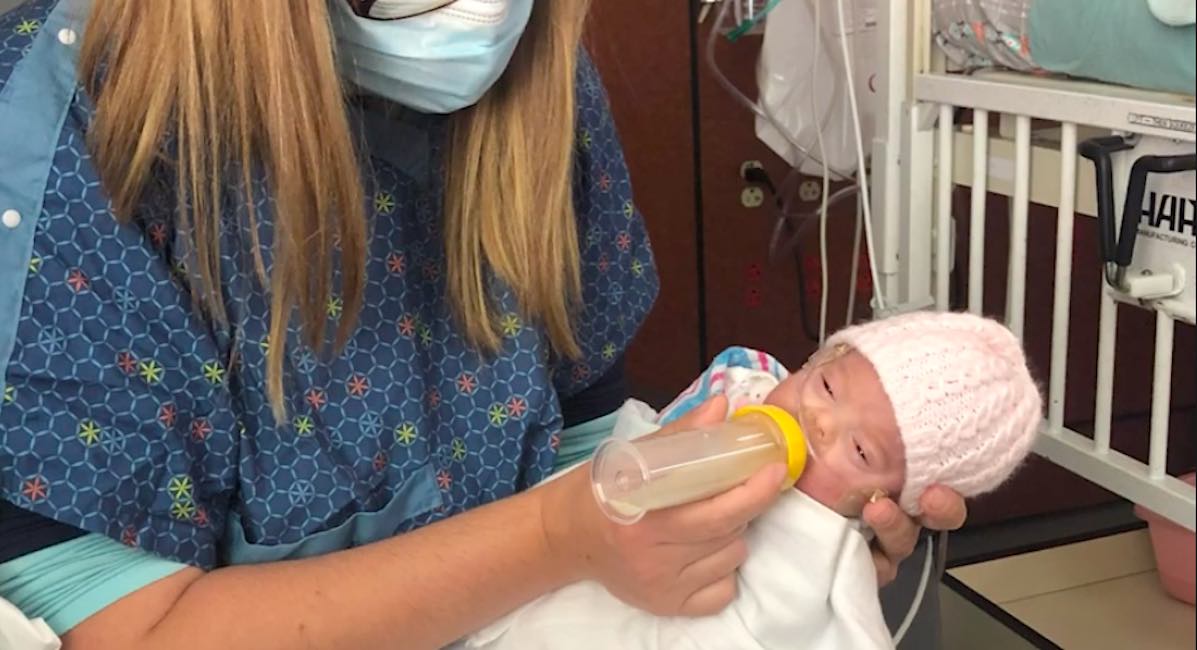 A baby girl born at just 22 and a half weeks and weighing less than one pound has been released from the hospital after more than three months. Harper Rose Schultz was born June 29 at Saginaw’s Covenant HealthCare and is the smallest baby to have ever been resuscitated at the Covenant HealthCare Regional Neonatal Intensive Care Unit.

“She’s such a blessing and we are just so thankful,” her mother Emille Wendzik told reporters while leaving the hospital.  Harper’s father Patrick Schultz added, “It’s nothing short of a miracle.”

Schultz explained in a video on the hospital’s YouTube channel that he and Wendzik went to the hospital because she was having abdominal pain. They did not expect that baby Harper would be born, but Wendzik had to undergo an emergency C-section. Micro-preemies are babies born weighing less than 1,500 grams. Harper weighed 320 grams. She was put on a ventilator and her survival rate was low. Babies born at that size have only a 20% chance of survival.

READ: Micro-preemie triplets born at 22 and 23 weeks survive after doctors did everything possible to save them

“This is the smallest baby that we’ve ever resuscitated, and to see her grow from where we started to going home now in reasonably good shape, it’s mind-boggling for us,” said Dr. Martin Nwankwo, a Pediatrix-affiliated Neonatologist at Covenant HealthCare. “We’ve never done this before. And, to be honest with you, half the hospitals in the United States would not have attempted this.”

Dr. Nwankwo is correct. The group TwentyTwoMatters created a map of all the U.S. hospitals providing this level of care for micro-preemies. On that map are only 100 hospitals in the US willing and able to treat babies born that young and small. Most NICUs do not have the equipment needed to help such small babies, but Covenant HealthCare does.

Though Harper is still using supplemental oxygen and requires special feedings, she is doing remarkably well.

“It’s been nothing short of extraordinary, honestly, it’s been amazing care,” Schultz. “Everybody involved and the fact that they can take something that small be life-sustaining is nothing short of a miracle, to be honest with you.”