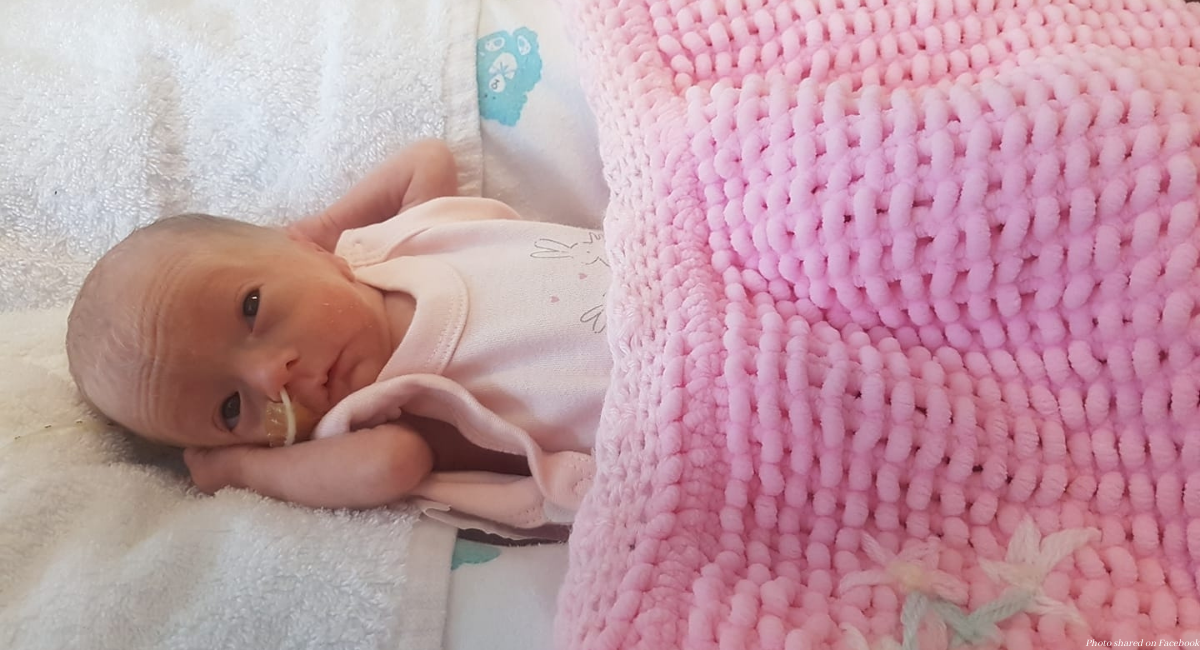 Lacey Murray is a premature baby, born in July at just 28 weeks gestation and weighing one pound, one ounce. The newborn baby girl was so small that even some doll clothes were too big for her.

“She was so, so small,” Lacey’s mother, Channae Kirkwood, told the Daily Record. “We couldn’t even hold her for the first three days. I was scared to even touch her in case I hurt her. They had to use bubble wrap to help keep her warm.

“She was so tiny, I couldn’t find clothes that would fit her properly,” she added. “All the premature baby clothes were too big. She had some dolls and I even tried taking off their clothes for her, but even they were too big.”

Kirkwood said the pregnancy was a surprise, but one she and her partner, Jamie Murray, were excited about. At the age of 16, Kirkwood had become pregnant, but had lost her son Caleb when he was stillborn at 19 weeks. Despite the shock of learning she was pregnant this second time, she was thrilled. But at 24 weeks, she suffered a serious bleed and was rushed to the hospital. She spent the next month in and out of the hospital until, on July 9, she began vomiting. Another trip to the hospital revealed that her water had broken.

“It was like all the exact same things were happening, except with Caleb it started when I was 19 weeks,” she explained.

“The doctors said [Caleb] wouldn’t survive and offered me a pill that would stop his heart, but when they scanned him I could [see him] moving around. He was doing somersaults and I decided to just let nature decide and I went in to labour with him for five days until he was finally born sleeping. It was devastating.”

Baby Lacey, however, was nine weeks further along than Caleb had been, which Kirkwood said gave her a better chance of survival than Caleb had. “I was just hoping and praying the same thing wouldn’t happen again. I was terrified,” said Kirkwood.

After her birth, Lacey was taken straight to the Neonatal Intensive Care Unit (NICU), and doctors didn’t think she would survive, being so premature. But, after four weeks, Lacey was eating, putting on weight, and breathing on her own. On October 8, Lacey was able to go home with her parents, five days after her due date.

Now 15 weeks old, Lacey is thriving. “She is amazing,” said Kirkwood. “We thought we were going to lose another baby but she fought so hard. She is doing well and growing all the time. She is still absolutely tiny but at least I can buy clothes from the ‘tiny baby’ range that almost fit her now.”

Premature babies born as young as 21 weeks are capable of surviving outside the womb when given proper medical care. While some hospitals are unable to give these premature infants the help they need, the number of hospitals that are equipped to help even the smallest micro-preemies are growing. All expectant parents should check this map to learn which hospital near them is willing and able to provide medical care in the case of premature birth.