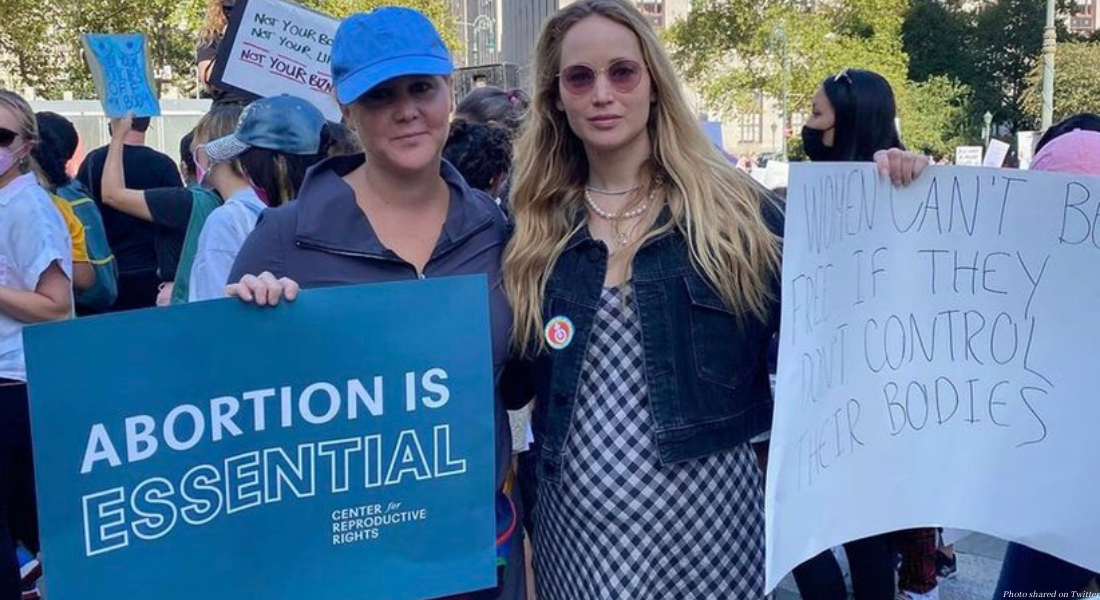 This weekend, thousands of people attended the Women’s March in New York City, and among them was 31-year-old actress Jennifer Lawrence, who was visibly pregnant, alongside 40-year-old actress Amy Schumer. The two held signs advocating for abortion, despite the life Lawrence was carrying inside of her.

Lawrence is expecting her first child with husband Cooke Maroney, but still advocated for mothers to be able to take the lives of their preborn children at any time, for any reason, up to birth.

Documenting the outing on Instagram, in which she tagged both Planned Parenthood and the Women’s March, Schumer wrote, “I don’t have a uterus and she is pregnant but we out here.” Both women also held signs showing their support for abortion; Schumer’s reading “Abortion is essential.” The sign Lawrence held read, “Women can’t be free if they don’t control their bodies.”

Planned Parenthood has been slammed by former employees for its past and present-day racism and white supremacy, and the corporation has long aided and abetted those who commit sexual assault rather than reporting the abuse. Despite this, Planned Parenthood enjoys significant favor among Hollywood elites and other abortion supporters.

A video from the march, shared by pro-abortion activist and former NARAL board member Renee Bracey Sherman, showed what the people there were marching for, with chants of “Abortion! Any time! Any reason!”

We must be clear in our demands: Abortion. Anytime. Any reason. pic.twitter.com/VRvSYe4Ls4

This kind of extremism is completely out of touch with the American people; polling has found, time and time again, that Americans overwhelmingly want abortion to be heavily restricted. Most Americans want abortion limited to the first trimester and support common-sense restrictions, which the abortion industry vehemently opposes. Parental consent, waiting periods, and informed consent laws all enjoy heavy support from voters, while just seven percent (7%) of Americans support taxpayer-funded abortion on demand, with absolutely no restrictions.

In other words, what the Women’s March is promoting is far out of step with the American public.

Furthermore, Lawrence’s argument — that women cannot be free without abortion — is actually an anti-woman, disempowering argument that upholds a patriarchal society which expects women to sacrifice their children and their bodies to uphold the status quo in which the wombless male body is the norm.

Pregnant and parenting women frequently face discrimination, regardless of their status in life. Students who get pregnant are frequently led to believe that their only option is to either have an abortion or drop out of school. Most colleges and universities have little-to-no support or resources for students who are pregnant and parenting. And after graduation, pregnancy discrimination is common in the workplace. Women frequently find themselves discriminated against with hiring, firing, and promotions if they’re pregnant, and Forbes has even found that just the possibility of being pregnant can mean being penalized. On top of those scenarios is the reality that many women are coerced into abortion, with some studies finding that over half of all women who get abortions felt pressured into it.

Lawrence couldn’t be more wrong; abortion isn’t freeing women. It’s protecting an anti-woman society, and preventing women from getting the support and resources they need.

Why would businesses and educational institutions bother with the hard work of helping pregnant and parenting women succeed when they can just encourage them to abort their children instead, which would certainly be easier and cheaper for their bottom line? By fighting for abortion to continue, women like Schumer and Lawrence are throwing less privileged women under the bus.