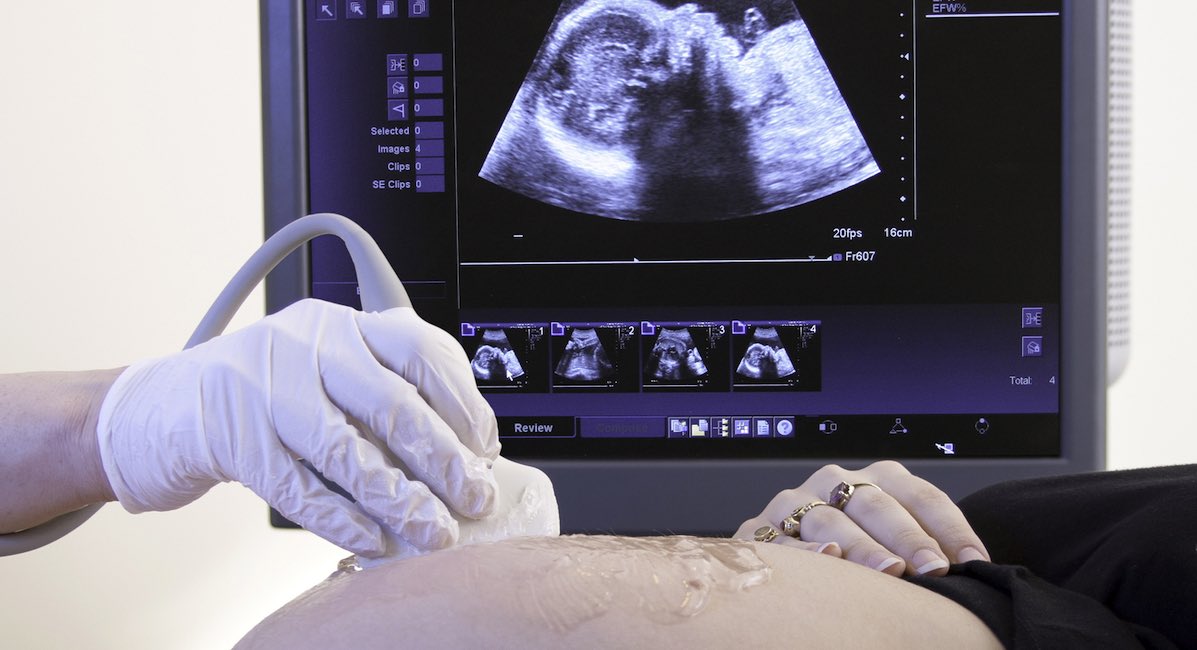 In recent weeks, there has been a rash of pro-abortion attacks on pregnancy resource centers. The pro-abortion terrorist group Jane’s Revenge has taken credit for some of these attacks. This group continues to make terroristic threats against pro-life groups and individuals. These pro-abortion activists are attacking ministries that give tangible help and support to pregnant and parenting women and families.

Live Action News has previously told the stories of women helped by pregnancy resource centers, such as Venezuelan immigrant Rosliany, who was given desperately needed help to have her baby, and Isabella, a 17-year-old who regretted taking the abortion pill and was able to save her baby through abortion pill reversal with help from a pregnancy center.

Pro-abortion activists claim to want to give women a choice about whether or not to have a baby, yet they are denying help to women who want to have their children. It is not “pro-choice” to attack ministries that make it possible for women to choose life despite their challenges.

Two of the pregnancy centers that were recently attacked have reviews that show how many women they have helped.

CompassCare Pregnancy Services in Buffalo, New York, was attacked by pro-abortion terrorists on the night of June 6. According to an email from the center:

Early this morning police and firefighters responded to smoke at CompassCare’s Buffalo office. The building was firebombed. The windows in the reception room and nurses’ office were broken and fires lit. Graffiti on the building left by the arsonists refers to the abortion terrorist group Jane’s Revenge reading, ‘Jane Was Here.’

CompassCare’s reviews show that they help women. Every legitimate reviewer on Google gave them five stars. The only exceptions were two reviews from pro-abortion activists who clearly had never been to the center. These were fake reviews and pro-abortion rants.

Here are some of the reviews.

One woman said that the pregnancy resource workers were nonjudgmental and didn’t pressure her to continue her pregnancy:

Others praised the staff and center: 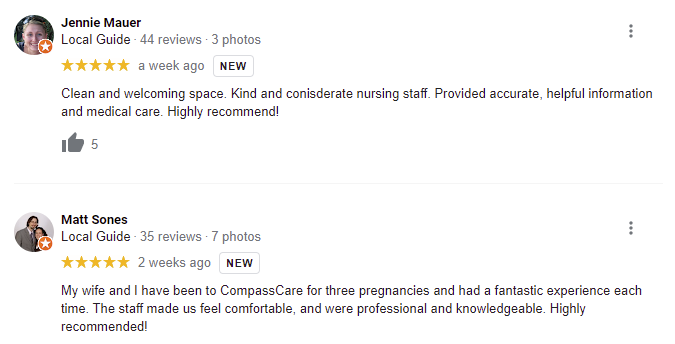 This couple appreciated CompassCare’s services so much that they went to them for every pregnancy they had, which shows that these pregnancy centers help everyone, not just those who are considering abortion.

Far from existing just to dissuade women from having abortions, pregnancy resource centers offer tangible help for anyone who is struggling to find the emotional and/or financial resources to have a baby – whether they are considering abortion or not. 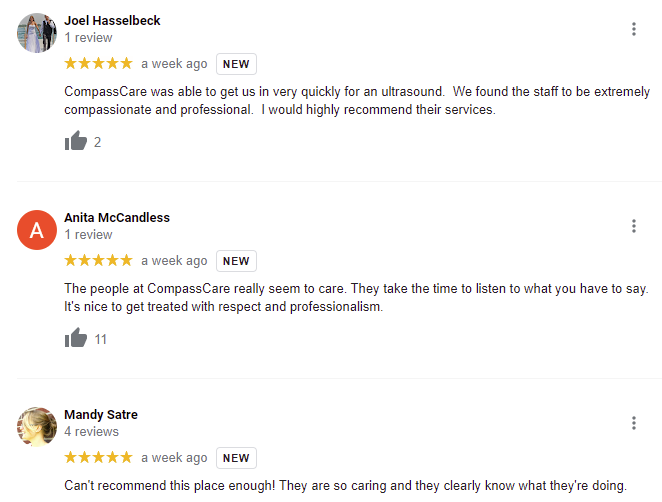 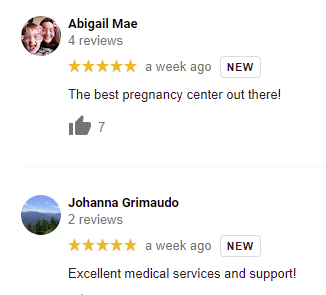 There are more reviews on their website, such as: 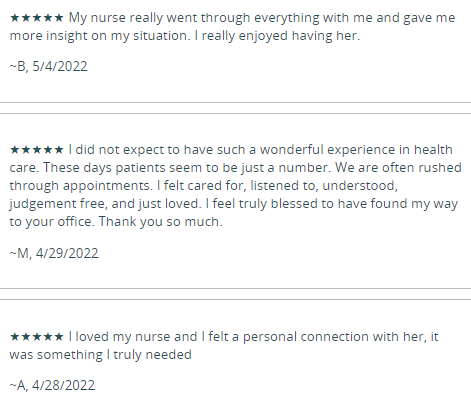 Mountain Area Pregnancy Services was attacked and vandalized. The center was sprayed with red paint, and the words “If abortions aren’t safe, neither are you!’ were painted on the building. This is a threat of physical violence against pro-lifers. The vandals also spray-painted “No forced birth” and broke windows, causing costly damage.

And yet the reviews for Mountain Area Pregnancy Services are overwhelmingly positive. With only one exception, every legitimate review was a five-star one.

Here are some of the reviews:

The woman below came to Mountain Area Pregnancy Services while pregnant with a baby she desperately wanted but feared she would lose. The staff gave her tremendous emotional support, again proving that these centers are willing to help anyone, not just those considering abortion. 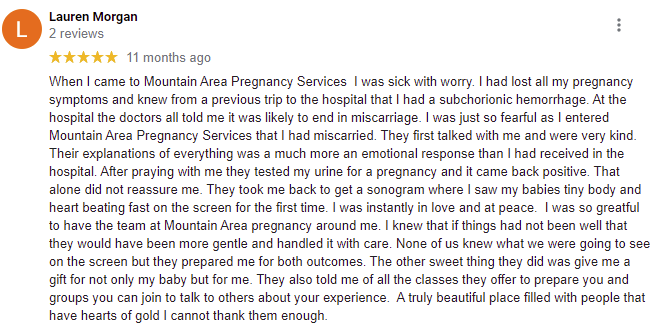 Another woman who had concerns about miscarriage was also given support:

More than one review praised the staff for being nonjudgmental:

Other women praised the center:

Several reviews were from women whose preborn babies had been diagnosed with a life-threatening or terminal condition. Again, these were people with wanted pregnancies. Pregnancy center staff gave them unconditional love and support: 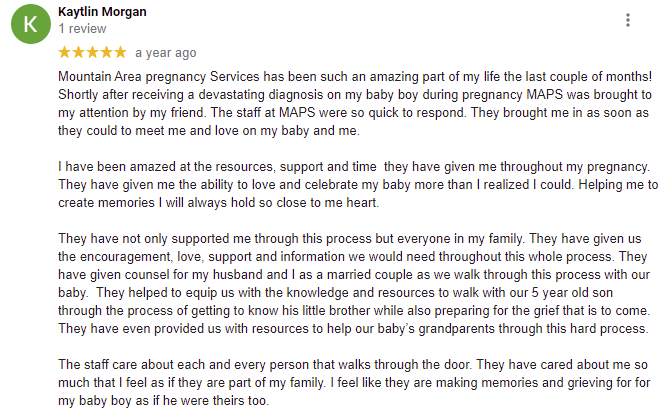 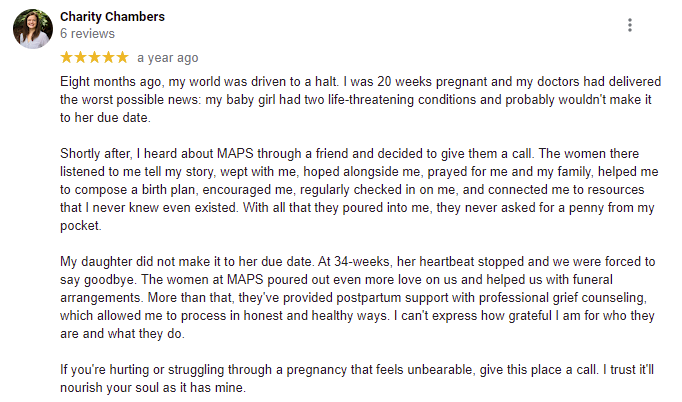 Pro-abortion terrorists not only vandalized this center but also threatened the lives and safety of the people who volunteer there, people who selflessly give of themselves to help pregnant women.

Keep in mind that all services these centers offer are free. They never charge women any money, unlike Planned Parenthood and other abortion facilities.

These reviews paint a picture of organizations that offers unconditional love, compassion, and support to women struggling with their pregnancies, whether they are considering abortion or not.