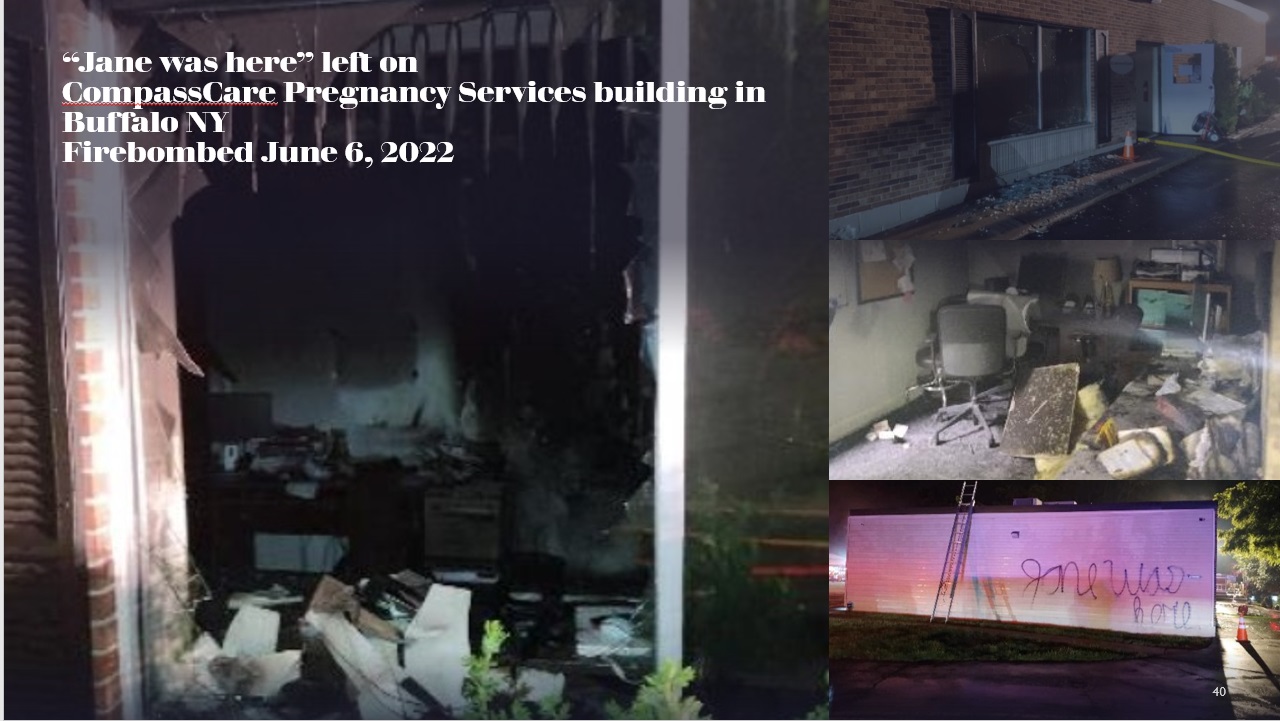 CompassCare Pregnancy Services in Buffalo, New York, a pro-life center assisting women experiencing unplanned pregnancies, was firebombed on the night of June 6, according to numerous news reports. The perpetrators spray painted the message “Jane was here,” possibly referring to the pro-abortion group Jane’s Revenge, which has vowed to unleash additional violence against pro-life groups by their arbitrary June 10th deadline.

An e-mail sent out by the center stated:

Early this morning police and firefighters responded to smoke at CompassCare’s Buffalo office. The building was firebombed. The windows in the reception room and nurses’ office were broken and fires lit. Graffiti on the building left by the arsonists refers to the abortion terrorist group Jane’s Revenge reading, ‘Jane Was Here.’ The group took responsibility for a firebombing of a pro-life organization in Madison, WI in May.

The organization vowed more of the same in other states as the Supreme Court Decision reversing Roe v. Wade nears and have been promoting to their followers what they have dubbed a “Night of Rage.”

The e-mail added that due to escalating pro-abortion violence against pro-lifers, “CompassCare alerted the local police and FBI, consulted with security professionals for a safety plan, and engaged a security firm who were expediting the installation of armored glass for the Buffalo office.” They then accused the state’s pro-abortion governor of ignoring the violence, writing, “New York’s Governor not only ignored the violence but instead earmarked $35 million in taxpayer funds to increase security at abortion clinics. Adding insult to injury, the New York legislature passed a bill investigating pro-life pregnancy centers precisely because they do not perform abortions.” 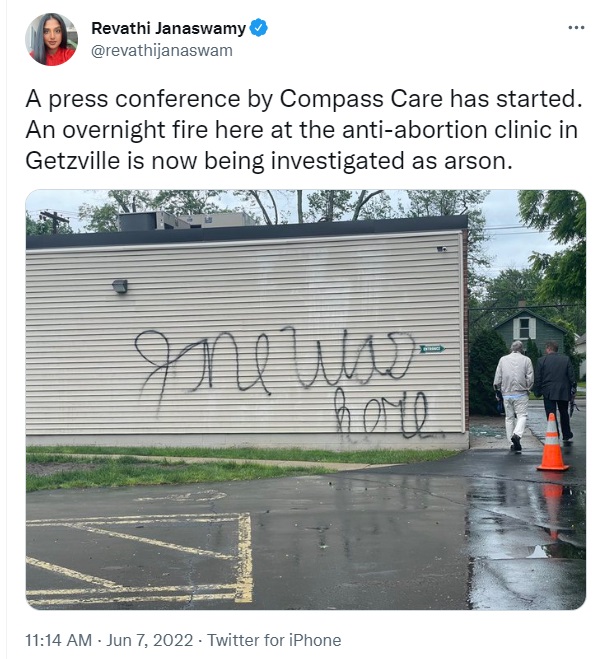 The pro-life center has vowed to continue helping women.

“This is the pro-abortion ‘Kristallnacht,’” stated CompassCare’s CEO, Jim Harden. “Because of this act of violence, the needs of women facing unplanned pregnancy will go unmet and babies will die. I wonder if Gov. Hochul will veto the Pregnancy Center Investigation Bill? I wonder if Attorney General Letitia James will investigate these cowardly criminals? CompassCare will rebuild because women deserve better. CompassCare will not stop serving because pre-born boys and girls deserve protection.”

Revathi Janaswamy, a reporter for Spectrum News1 Buffalo, attended today’s press conference and tweeted, “CompassCare’s CEO Jim Harden says the clinic will be moved to another location to start serving their clients again tomorrow. He says he will not disclose the new location to the public at this time, but will share that information to clients. Harden says the damage inside is ‘extensive.'”

Police in Amherst, New York, published a message on Facebook and Twitter saying the fire is being investigated as arson and claiming two firefighters were treated at the scene for minor injuries. If anyone has information, contact the Amherst Police Department at 716-689-1322.

In addition to the latest attack by pro-abortion extremists, Mountain Area Pregnancy Services in Asheville, North Carolina, was also vandalized with a threatening message last night. A message and pictures posted on the pro-life group’s Facebook page read, “Friends, please pray!!! Our building was vandalized last night. We are dealing with the cops and will still see clients, but we need your prayer support!! #WeWillStand!#MAPS” 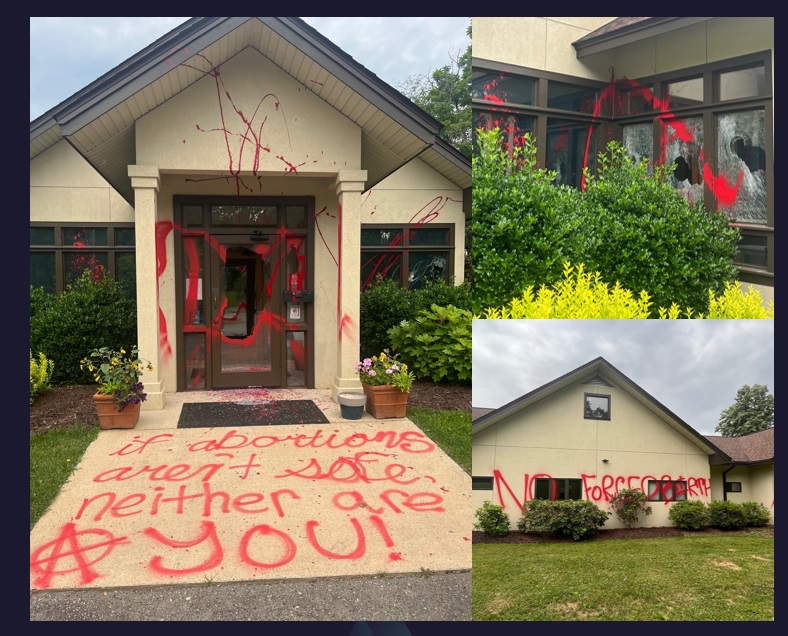 According to a report by FoxCarolina.com, “Police said they were called to Mountain Area Pregnancy Services on Old Haywood Road around 7:20 a.m. on Tuesday to investigate the report of vandalism. Upon arrival, officers said they found red graffiti with threatening wording that said, ‘If abortions aren’t safe, neither are you!’ along with an anarchist symbol on the front of the building. The wording, ‘No forced birth’ was also painted on the side of the building. Red paint was sprayed throughout, and windows were broken, which occurred sometime overnight Monday.”

“We’re told the offender might have injured themselves because forensics technicians were able to obtain blood samples left on behind from the broken window and bloody trail,” the report also stated.

It remains unclear how law enforcement intends to respond to pro-abortion violence on a national level. To date no mainstream abortion rights organizations have denounced the escalating violence. For more, read Live Action News articles on the acts of violence (here, here, here and here).