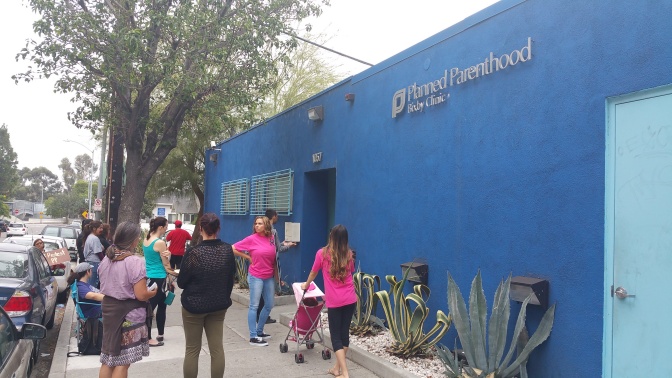 On Saturday, August 22, thousands of pro-lifers gathered at more than 300 Planned Parenthood clinics around the nation. Using the rallying cry #ProtestPP, these regular Americans chose to take a brave stand, declaring that they were no longer okay with sitting by while children are killed and women are lied to every day. They protested the rampant deception, the baby body part harvesting and sales, and the killing of born, living children at Planned Parenthood.

Jaylene Daugherty Romero, one of the peaceful protesters at Planned Parenthood Bixby Clinic in Los Angeles, shared an amazing story.  At this clinic, a security guard was “overcome with emotion by the attrocities [sic] happening to our littlest of neighbors in the womb today. He called his boss and quit over the phone.”

Dr. Deborah Nucatola, the abortionist featured in the first Center for Medical Progress video, is the associate medical director of Planned Parenthood’s Los Angeles affiliate.  But the story doesn’t end there.

Then he was confronted by a Planned Parenthood staff member and the property manager. He turned from the conversation, grabbed his back pack and walked off of the property. People clapped, encouraging him, as he walked past them on the sidewalk. Some people gave him money and a sister in Christ offered him a Security job if he chooses to accept it.

Romero continued to explain why the guard quit:

He told his boss he was a Christian and he couldn’t work at this place. He was supposed to be getting a raise but he said he doesn’t worship money. Working for a place that murders babies wasn’t worth it. He said he needed to ask GOD for forgiveness for being there today. He was clearly moved inside. We gave him some Gospel materials…

The story of this security guard illustrates one reason why it is essential for everyday Americans to spread the truth about the barbarity and inhumanity of Planned Parenthood: Not even all who work for abortion clinics are aware of exactly what goes on inside.

During that interview process, I asked her [Planned Parenthood of the Rocky Mountain’s abortion doctor, Savita Ginde] specifically “Why do the protesters claim you cut up baby parts and sell them for research?” Her answer: “Because they’re crazy.” I even spent many a morning telling the protesters how they were lying about the body parts being sold. We didn’t do that. I was confident we didn’t, because that’s what I was told. …

I sat stunned watching the video [showing Ginde discussing the sale of baby body parts with a fetal parts buyer]. They swore that our affiliate didn’t do that. They hid it from me, and lied to me so that I would continue to protect them while they did it. And the worst part of the video? The announcement of “Hey, it’s another boy!”