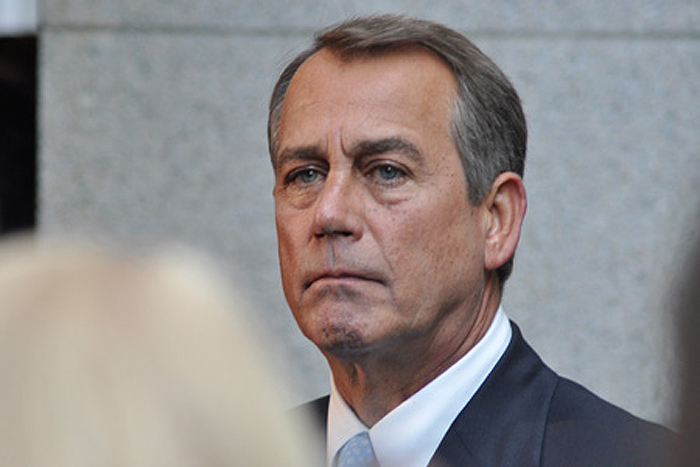 Republican congressional leadership’s serial negligence on standing up to Planned Parenthood has proved to be a significant factor in renewed talk of ousting John Boehner from his perch as Speaker of the House, according to a new report from Politico:

Boehner’s chief of staff, Mike Sommers, met this summer with a top aide to North Carolina Rep. Mark Meadows (R-N.C.), who drafted the resolution to overthrow the speaker and indicated at a town hall meeting late last month that he’s not backing down […] Top lawmakers and aides in leadership expect Meadows or another Boehner antagonist to try and force a vote before the end of the year on whether to keep Boehner as speaker.

Boehner is nearly certain to lose the support of the 25 lawmakers who voted against him last time, plus a few more who’ve grown frustrated with him. But Democrats would also get a say, and should they vote to keep Boehner as speaker — opposing him would invite chaos, and it’s anyone’s guess who they’d have to deal with as his replacement — Boehner would likely retain the gavel until January 2017, unless he decided to call it quits sooner. Meadows did not force a vote in July, but GOP leadership assumes someone will this fall.

And defunding America’s premiere fetal death factory is poised to bring that conflict to a head sooner rather than later:

GOP leaders privately call the demand to quash Planned Parenthood funding a pipe dream, since President Barack Obama would never go along. Even Senate Majority Leader Mitch McConnell (R-Ky.), who like Boehner is intent on avoiding a shutdown, said defunding the organization would have to wait until there’s a new president.

But House leadership, cognizant of the potential political fallout for the speaker, is split over how to handle the situation.

Some aides say Boehner should offer a separate bill to deny the family planning organization money, rather than try to do so through the overall budget. That would allow Republicans to have their say without wasting precious time on a futile effort that would tempt a shutdown, they argue.

But others say Boehner, as a show of good faith to conservatives, should at least wage the fight. They want him to propose a broader spending bill without money for Planned Parenthood, watch it stall in the Senate as it probably would — then go to Plan B.

Politico quotes several Boehner apologists, such as fellow Ohio Rep. John Tiberi’s evidence-free insistence that “If there’s anyone in this world who would want to defund Planned Parenthood, it’s John Boehner” and rejoinder of “how do you do that with a president who doesn’t agree with you?” and Georgia Rep. Lynn Westmoreland, who professes to believe that Boehner “feels like he’s doing what’s best for this country — regardless of what the political consequences are.”

Perhaps Congressman Tiberi wasn’t paying attention last September, when Boehner did far worse than merely allow Planned Parenthood’s funding; he, Majority Leader Kevin McCarthy, and Majority Whip Steve Scalise, and one hundred seventy-three additional House Republicans gave “yes” votes to continuing the funding, papered over with an empty promise of “we don’t have the Senate right now, but things will be different in January” (a year later, things aren’t different after all).

Or two months ago, when Boehner refused to even endorse defunding as a policy goal, never mind near-term strategy, because we didn’t know whether a pack of undisputed babykillers were doing other heinous things on top of their rampant babykilling. Weeks after countless pro-lifers called out that profile in un-leadership, the only statement his press office has put out since then only contains one new reference to defunding: McCarthy’s statement that “once we’ve gotten to the bottom of” their fetal organ trafficking, “we can work to stop any illegal selling of fetal body parts and make sure no taxpayer is ever forced to give their money to fund these repulsive practices”—again suggesting that the organ harvesting, not Planned Parenthood for its own sake, is what needs to be defunded.

Or last month, when in a Golf Channel interview Boehner whined that he can’t play golf with Barack Obama anymore because everyone who actually sent him to Washington to do serious work “gets bent out of shape worried about what we are up to.” It’s one thing to be friends with someone who disagrees; it’s quite another to pal around with shameless, knowingly-dishonest demagogues for violence against children whose job it is to know better. If you sincerely believe abortion is murder of the innocent, would you want to hang out with people who dedicate their lives to perpetuating it? Would you be so flippantly dismissive of those who had a problem with such chumminess?

If Congressman Westmoreland truly believes politics isn’t what’s driving Boehner’s decisions, perhaps he can square that belief with conference calls in which Boehner explicitly cites political backlash against Republicans in previous elections to justify his opposition to shutdown fights, or talk show appearances where he washes his hands of the whole thing after the fact, rattling off time after time in which he claimed the ObamaCare shutdown was a bad idea.

And if these Congressmen are stumped over how the House can get away with exercising its constitutional power and duty as guardians of the national purse strings, perhaps they could read Live Action, where we’ve repeatedly explained their legislative and rhetorical options for denying Planned Parenthood the people’s money, explaining who has voted to give the president all the money he needs to continue government operations, and persuading the electorate who’s really to blame if the president chooses to veto appropriations that leave his prenatal-slaughterhouse pals empty-handed.

On Tuesday, conservative commentator Matt Walsh declared, “The Republican Party has never actually done anything to earn its pro life reputation. Time now to earn it, or admit it was always a lie.” When they react to evil of this magnitude with such pathetically-disproportionate responses, it’s hard to disagree. And with their base so dramatically expressing their lack of confidence in the party across the board via the almost-unprecedented Donald Trump phenomenon, over the next few months we could very well witness a major turning point in either the traditional GOP power structure, or in the pro-life movement’s relationship with the GOP.