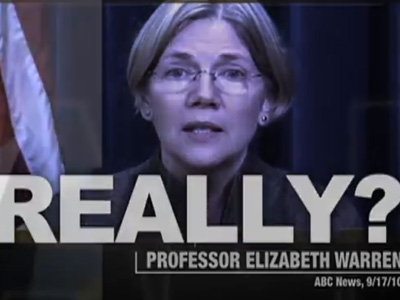 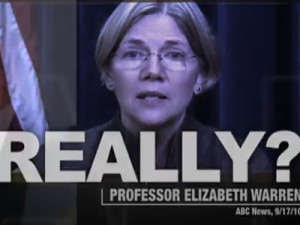 As Capitol Hill freaks out over conservatives in the House of Representatives working to protect America from the unconstitutional, abortion-promoting monstrosity known as ObamaCare, Democrat Sen. Elizabeth Warren of Massachusetts took the opportunity to resurrect the notorious “War on Women” defamation campaign:

Madam President, I come to the floor today in a state of disbelief.

Why, it’s almost as unbelievable as the false claims to Cherokee heritage I made throughout my academic career!

[T]he Republicans have decided that the single most important issue facing our nation is to change the law so that employers can deny women access to birth control coverage.

Uh, I’m pretty sure the birth control mandate isn’t the only problem they have with ObamaCare.

In fact, letting employers decide whether women can get birth control covered on their insurance plans is so important that the Republicans are willing to shutter the government and potentially tank the economy.

Yeah, the nerve of employers, thinking that paying for insurance gives them any say in what it covers…..

Actually, House Republicans have repeatedly sent the Senate bills to fund the entire government, as well as resolutions to ensure that the National Guard, National Institute of Health, national parks and monuments, WIC vouchers, and more remain provided for (and contrary to this week’s spin, funding government activities through separate appropriations bills is how things traditionally work).

Barack Obama and Harry Reid refuse to use these perfectly adequate tools to end the shutdown because they refuse to consider any defunding of, changes in, or delays to the very program whose three years of prep time now look more like three hours.

And considering the hundreds of employers who are slashing jobs and hours because of ObamaCare, you really have to ask which side is putting their desired birth control policies above the country’s economic health.

I have a daughter and I have granddaughters. And I will never vote to let a group of backward looking ideologues cut women’s access to birth control. We have lived in that world, and we are not going back. Not ever.

Warren seems to be garnering a fan base on the far left, with one blogger even calling this speech “brilliant,” but apparently the Senator isn’t quite brilliant enough to grasp that the freedom to acquire something and coercing someone else to pay for it are two different things, or to know that the heroes of the era she’s invoking fiercely opposed abortion. So if they were around today, she would almost certainly accuse them of not “be[ing] there for all of our daughters and all of our granddaughters” on what “really matters.”

It is time to end the debate about whether the Affordable Care Act should exist and whether it should be funded.

Shut up, she explained.

Congress voted for this law. President Obama signed this law.

The Supreme Court upheld this law.

Only via utter disregard for the Constitution’s text and intent, ObamaCare’s own legislative history, and the Supreme Court’s own judgment in another section of the very same ruling.

The President ran for reelection on this law. In fact, his opponent said he would repeal it–and his opponent lost by five million votes.

No, Senator, actually, even the Huffington Post’s Howard Fineman noted at the time how little Obama’s campaign discussed it on the trail, going so far as to declare, “This election will be a referendum on many things, but Obamacare is not one of them.” Obama and Joe Biden barely mentioned it at their own nominating convention. And Mitt Romney failed to make much of a case against it, out of misplaced fears that it would raise damaging questions about his own Massachusetts healthcare plan.

Further, the country also elected the House—the segment of the federal government most directly accountable to and reflective of the people. Even though Warren’s legal training was primarily in financial issues rather than constitutional, surely she’s familiar with the idea of checks and balances. Article I, Sections 7 and 9 of our Constitution give the House the power of the federal purse strings precisely so it can counter wayward executives.

As James Madison put it in Federalist 58:

The House of Representatives cannot only refuse, but they alone can propose, the supplies requisite for the support of government. They, in a word, hold the purse that powerful instrument by which we behold, in the history of the British Constitution, an infant and humble representation of the people gradually enlarging the sphere of its activity and importance, and finally reducing, as far as it seems to have wished, all the overgrown prerogatives of the other branches of the government. This power over the purse may, in fact, be regarded as the most complete and effectual weapon with which any constitution can arm the immediate representatives of the people, for obtaining a redress of every grievance, and for carrying into effect every just and salutary measure.

And lest there remain any doubt about the will of the people…well, I can’t say it any better than Jeffrey Anderson at National Review:

After droning on about a host of issues unrelated to abortion, contraception, or ObamaCare, Warren closes by calling on “legislators who cannot cope with the reality of our democracy to get out of the way.”