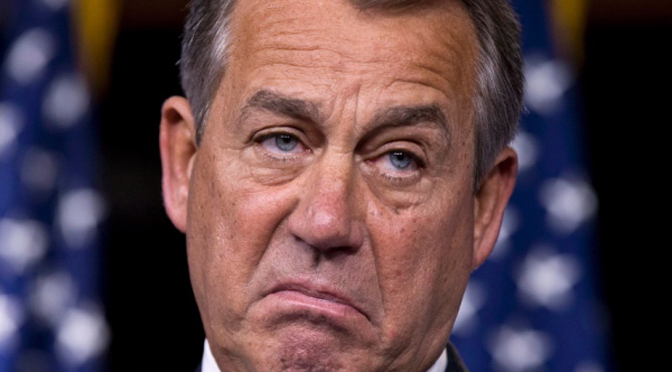 A lot of congressional Republicans, most GOP presidential candidates, several governors, and even some pro-choice politicians and commentators are excoriating Planned Parenthood over their organ harvesting side business—launching investigations, calling to eliminate their tax subsidies, and in Ted Cruz’s case, demanding criminal prosecution.

However, while Congress is investigating, House Speaker John Boehner is strikingly noncommittal on how much action he’ll push for beyond that:

Q: By September 30, the House needs to pass a bill to fund HHS for fiscal year 2016. Will that law–whether it’s a stand-alone appropriations or a CR–fund Planned Parenthood?

A: Listen, the Planned Parenthood issue is under review by two of our committees. Listen, I’ve seen these two videos. They’re gruesome, and I think they’re awful. That’s why the Energy and Commerce Committee and the Judiciary Committee are doing an investigation. I expect we will have hearings, and the more we learn, the more it will educate our decisions in the future.

Q: Are you going to use the appropriations process to gut Planned Parenthood?

A: There is an investigation under way, and I expect there will be hearings. And as that process develops, we’ll make decisions based on — based on the facts. But let’s get the facts first.

All the momentum is building against Big Abortion, your pro-life base is incensed, the majority is on your side, more videotaped outrages are waiting in the wings, and Planned Parenthood is so scared of potential future revelations that they’re doing preemptive damage control. So how are your instincts telling you to respond?

If you’re John Boehner, they’re telling you to throw cold water on the whole thing. (Then again, we shouldn’t be surprised, considering this is the same guy on whose watch the 20-Week Abortion Ban was derailed, who once professed to “absolutely trust” our abortion absolutist President Barack Obama, and who has let Planned Parenthood funding sail through the House before.)

This is a beautiful example of why Irving Kristol called the GOP “The Stupid Party” all those years ago:

[T]he Republican Party is made uneasy by too close an association with political ideas. In a better world, this would be a desirable, even admirable, trait. But in such a world, the conservative party would indeed be the “natural” governing party—losing an occasional election, to be sure, but then patiently waiting for the “common sense” of the citizenry to reassert itself. That is not the kind of world we live in, and a conservative party which tranquilly watches itself become the party of a minority of registered voters has carried “conservative stupidity” beyond the limits of political reason.

We already know their business is killing babies—y’know, Mr. Speaker, the practice your own party platform calls for abolishing, just before professing to “oppose using public revenues to […] fund organizations which perform or advocate it.” We already know they lie to patients, neglect their welfare, and promote self-destructive behavior to children. The Center for Medical Progress videos are highlighting new dimensions of the inhuman agenda that’s been clear for years, not some hitherto-unknown side of a seemingly benign organization.

This is where Republican leadership always blows it: a winning issue falls into their lap, but where they should be steeling themselves for a long, protracted public-relations fight to move the ball closer to the end zone, with lawmakers finding every camera they can and the RNC carpet-bombing the airwaves with ads alternating between sound bites of Frau Doktor Nucatola talking about “crushing” babies and Obama declaring “God bless Planned Parenthood,” they instead hem and haw and stumble around for the minimum action necessary to keep the base complacent.

It’s like watching Charlie Brown falling on his face for the umpteenth time, except Lucy’s nowhere to be seen and the blockhead has somehow yanked the football from under his own foot.

I am still optimistic that this scandal will clarify the horror of the issue for many undecided Americans and move public opinion closer to life in the long term, but meaningful policy changes in the near future are far from certain. So if pro-lifers want more than tough talk and a few show committees from their elected representatives, then we’ll have to put on the pressure, and not relent until we see results.

UPDATE: The Daily Signal reports that Representative Dianne Black, who is sponsoring a bill to immediately defund Planned Parenthood, has responded to Boehner’s remarks: