The New York Senate and Assembly each passed an expansive pro-abortion bill on Tuesday, within 90 minutes of each other. Governor Andrew Cuomo immediately signed the Reproductive Health Act into law and then celebrated by lighting the state up pink. Sitting with Cuomo as he signed the bill was Sarah Ragle Weddington, the lawyer who represented Jane Roe in Roe v. Wade and the woman whom Roe would later say manipulated her and lied about her in order to convince the Supreme Court to legalize abortion. Roe, whose real name was Norma McCorvey, said Weddington lied about McCorvey having been raped. McCorvey said that Weddington simply needed a vulnerable pregnant woman to help open a court case. McCorvey, who was homeless, fit that bill. Still, Cuomo thanked Weddington for her work in ensuring legalized abortion.

Third-trimester abortion will be allowed under the new law when a preborn child is diagnosed with a condition that will cause him or her to die at or shortly after birth. In addition, the new law removes protections for babies born alive after an abortion — meaning they could be left to die after birth — by rescinding a portion of NY’s public health law, seen below. 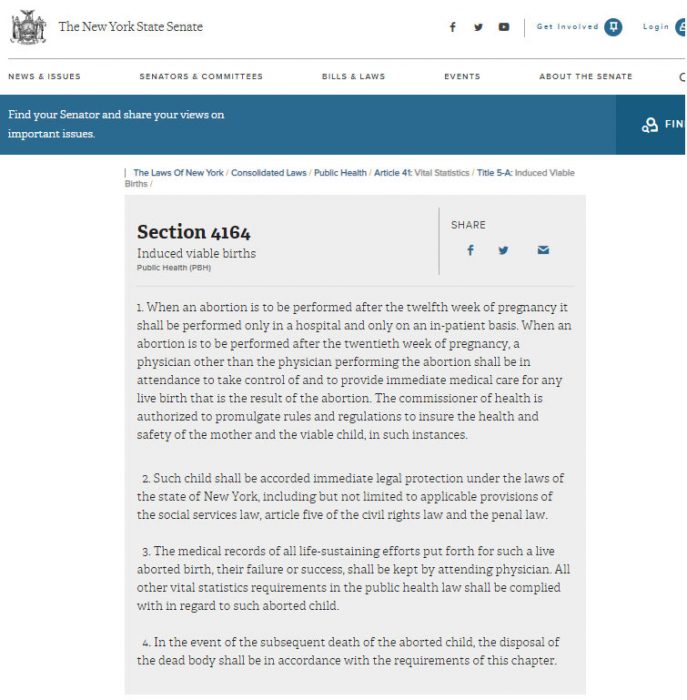 The law also allows for abortion through all nine months of pregnancy when the mother’s life or health is at risk – which is completely unnecessary, as delivering a live baby via C-section is faster and safer than killing the baby in a two-day late-term abortion. Former abortionist Dr. Anthony Levatino explains in the video below:

The new law also allows non-physicians to commit non-surgical abortions and moves the abortion law from the state’s penal code to its health code – which removes any threat of the prosecution of abortionists. Senate Republicans, however, said that change could make it impossible for a woman who loses her preborn child because of an assault to have her assailant prosecuted. In addition, according to the New York Law Journal, “Lawmakers also codified into state law on Tuesday regulations promulgated by the state Department of Financial Services that require health insurance companies to provide coverage for contraceptives in New York. Both bills take effect immediately.”

This is the sound from the NY Senate chamber after the 38-24 vote to:

– Add abortion to the NY Constitution

New York has an abortion rate of 23.1 per 1,000 women, twice the national average of 11.8 per 1,000 women. 25 to 27 percent of pregnancies in New York State end in abortion. In New York City, 78 percent of abortions are on African American babies. More black babies being killed through abortion than being born in the city. Cuomo’s new abortion law will likely increase those numbers.

The Senate passed the bill first by a vote of 33-24. The Assembly then voted 92-47 in favor of the bill. It is the first change to New York’s abortion laws since 1970 and Cuomo pushed the abortion expansion out of fear that Roe v. Wade could be overturned by the U.S. Supreme Court.

Live Action president Lila Rose issued a statement on the bill, saying, “Convicted criminals aren’t subjected to the death penalty in New York state, but now children up until the ninth month of pregnancy can be given lethal injections and poisoned to death. This is no different than infanticide…. New York’s law is barbaric and inhumane and rejects modern science and medical advancements that reveal the development and humanity of life in the womb…. A recent Marist poll showed 75 percent of Americans believe abortion should be limited to – at most – the first three months of pregnancy.”