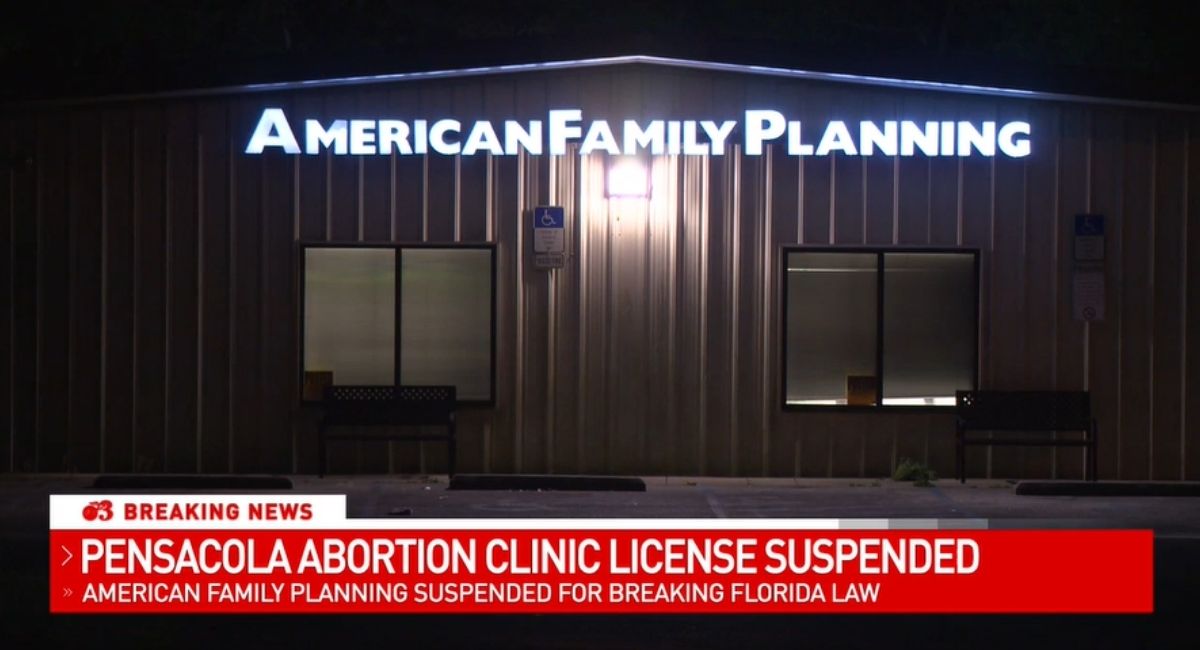 Update 6/2/22: A Pensacola abortion business ordered to close by the state of Florida last week following the hospitalizations of three women in nine months has said it plans to appeal the emergency state order that shut it down.

Attorney Julie Gallagher representing the clinic, American Family Planning, told the News Journal that she plans to file the appeal to the Agency for Healthcare Administration order as early as Monday, June 6.

5/22/22: An abortion clinic in Pensacola, Florida was ordered to close by the state on Saturday after three women were hospitalized in the last nine months due to injuries sustained during what are believed to have been second-trimester abortions. The state determined that the facility presented an immediate threat to the health, safety, or welfare of its patients and had its license removed.

According to Pensacola News Journal, American Family Planning, owned by Integrity Medical Care LLC, is the only abortion clinic on the Gulf Coast between New Orleans and Tallahassee. Integrity Medical Care has ties to notoriously dangerous abortionist Steven Brigham, who regularly scams state medical boards by using other abortionists as a front for his abortion businesses to make it appear as if he is not involved. He does this because his license has been suspended, revoked, or relinquished in multiple states, and he is not licensed to practice medicine anywhere. On Friday, Florida’s Agency for Healthcare Administration (AHCA) issued an emergency order to cease operations at American Family Planning until a hearing can be held.

The hospitalizations indicated in the order were not reported by the abortionist or clinic staff as required within 10 days. The order also states that the staff failed to keep any records of the women’s vital signs during the abortions.

One woman, who underwent an abortion at American Family Planning in August 2021, reportedly had to have portions of her colon removed, while another woman who had an abortion in March started bleeding so severely that EMS personnel had to take her to the hospital. The emergency workers noted that there were “pools of blood on the floor.” They also reported that she was cool to the touch, did not have a pulse detectable in her wrist, and her blood pressure was dangerously low. When she arrived at the hospital, it was discovered that she had a “big hole on the left wall of the uterus and another on the right side” as well as lacerations to her cervix. She had to undergo a complete hysterectomy.

Then in May, the abortionist at American Family Planning stopped a woman’s abortion after her cervix was lacerated and a possible rupture of the uterus was noted. She had already been administered drugs and told to wait in her car for her procedure when the staff should have been monitoring her vital signs. Then, after her injuries, the staff told her and her spouse to go to a hospital in Mobile, Alabama instead of the one in Pensacola as the clinic’s license required. Her spouse drove her to Mobile where doctors at the hospital noted that she had no blood pressure and her blood oxygen level was only 80%. Blood oxygen levels are considered normal when between 95% and 100%. Anything under 88% is considered dangerous. She had to be resuscitated and have a blood transfusion to “replace egregious blood loss.”

On none of the occasions did the American Family Planning abortionist communicate with the doctors at the hospitals about the conditions of the women or what abortion procedures had been used — both of which are required under the clinic’s license. The abortionist told AHCA officials “that he is unfamiliar with [the abortion facility’s] policies and procedures.”

The clinic was ordered to close at 12:01 a.m. Saturday until the hearing regarding the matter can be held.

Pro-life watchdog group Reprotection along with Emerald Coast Coalition for Life aided in the investigation, according to a press release from Reprotection, alerting the dangerous practices of American Family Planning to the appropriate agencies.

This isn’t the first time that American Family Planning has faced allegations of failing to follow protocol. In 2018, the clinic failed to renew its license but continued to operate, carrying out abortions on at least seven patients without a license. It was ordered to cease operations. In 2021, the clinic did not have a medical director, admitting privileges, or a transfer agreement with a local hospital. The clinic administrator presented two different agreements on two different days but neither was valid. Google reviews by women who were patients of the facility warn others to “stay far, far away from this facility” and that the facility was a “DISGUSTING, FILTHY, UNSANITARY PLACE!”

Editor’s Note 5/23/22: This article was updated with information on pro-life efforts to protect women from this clinic.