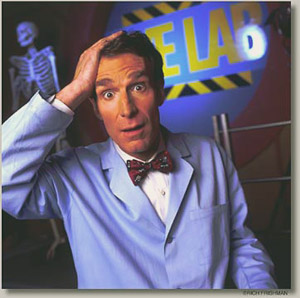 I’m not sure if it was the novelty of a childhood icon wading into contentious waters or genuine passion for the subject matter, but the creation/evolution debate between Bill Nye the Science Guy and Creation Museum head Ken Ham has captured a surprisingly large amount of the nation’s attention.

As a Christian who has no quarrel with evolution and no investment in the idea of a 6,000-year-old Earth, I didn’t feel the need to tune in (personally, my view is that the subject is usually debated in a rabbit hole that distracts from the real lessons people should take away). But so far, the most important aspect of Nye v. Ham has been overlooked – which misconceptions our Arbiters of Real Science feel compelled to champion, and which ones they’re content to let stand.

At CNN, Nye explained that he agreed to this debate because to “allow our students to come of age without the knowledge gained through the extraordinary scientific insights and diligence of our ancestors would deprive them of understanding of nature and our place in the cosmos.”

This isn’t the first time the Science Guy’s weighed in on scientific controversies. In October 2012 he deemed Rep. Paul Broun as “by any measure, unqualified” to sit on the House Committee on Science, Space, and Technology because of the Georgia Republican’s (admittedly ridiculous) comments about evolution, embryology, and the Big Bang theory. And he’s also gone on TV to affirm man-made global warming.

But, oddly enough, it seems he has nothing to say about a particularly egregious fallacy, which is far more widespread and does far greater harm than any misconceptions about our planet’s age or climate. The modern study of embryology has reached an abundantly clear consensus that the individual life of a distinct and whole human being begins at fertilization. As Dr. Maureen L. Condic, who teaches neurobiology, anatomy, and developmental neuroscience at the University of Utah, recently wrote for the peer-reviewed journal Stem Cells and Development (hat tip to Wesley Smith), “embryos are clearly organisms” because:

Embryos develop in a predictable manner toward a species-specific adult form (human embryos do not mature into mice, monkeys, or tumors). Embryos repair injury. They adapt to changing environmental conditions. Most importantly, they show coordinated interactions between parts (molecules, cells, tissues, structures, and organs) that promote the survival, health, and continued development of the organism as a whole; that is, interactions that are characteristic of ‘‘an individual constituted to carry on the activities of life by means of organs separate in function but mutually dependent: a living being,’’ (www.merriam-webster.com/medlineplus/organism; accessed 6/23/2013) […] ethical consideration is given to human embryos based on the status they already possess; that is, their unique and fully operative ability to function as a human organism.

But, at the cost of over fifty million needless deaths, one side in America’s culture war remains committed to denying the scientific reality. American abortion law is based in large part on the woefully unfounded judicial determination that “the difficult question of when life begins” was not answerable through the “disciplin[e] of medicine” – and one of our two major political parties operates from that premise to this day.

While seeking to be elected as the most powerful man in the free world, Barack Obama said it was “very hard to know what that means, when life begins,” so he hadn’t “come to a firm resolution on” the question. His science advisor, John Holdren, wrote that a fetus doesn’t “ultimately develop into a human being” until well after birth, when he or she has had “early socializing experiences.”

Ex-Speaker of the House Nancy Pelosi denies that “anybody can tell you when life begins.” The leader of their party’s political arm, Debbie Wasserman Schultz, calls it “extreme and radical” for legislatures to confirm that life begins at conception. In Connecticut’s 2012 Senate race, both parties nominated people who believed that life didn’t begin until birth. Sen. Barbara Boxer thinks life doesn’t begin until “you bring your baby home” or “when your baby is born.” Sen. Dianne Feinstein based her opposition to Judge Samuel Alito’s Supreme Court confirmation in part on Alito having “a different interpretation of when life begins” from Roe v. Wade’s false one.

The special-interest group they’re all pandering to, the abortion industry, does all it can to reinforce these notions. Planned Parenthood’s health expert, Dr. Vanessa Cullins, claims that because scientists “hold very different views about when life begins,” so there’s no way to be objectively sure whether it starts “when the egg is fertilized,” “with birth,” or “somewhere in between.” And Live Action’s Rosa Acuna and Inhuman investigations have documented abortionists and abortion-clinic staff misrepresenting numerous aspects of fetal development to their customers. Planned Parenthood college outreach members have even told students to ignore science when considering abortion, far more explicitly than anything Ken Ham may advocate.

These fallacies run rampant in the media, from pro-abortion activist Katie Klabusich telling the Daily Beast that “life begins at conception” is a belief of “biblical fundamentalists” to MSNBC host Melissa Harris-Perry claiming that the question “when does life begin” depends on “the feeling of the parents […] but not science.” Atheist biologist Richard Dawkins goes so far as to say “any fetus is less human than an adult pig.” Atheist biologist PZ Myers flatly argues that “the fertilized egg is not a human life.”

After the debate, Bill Nye went on Bill Maher’s show to bemoan the dangers of raising “a generation of students who are scientifically illiterate,” which he said deeply concerned him “as a patriot.” Sadly, he apparently considers the manifestation of scientific illiteracy most in need of a Science Guy – because its danger is the most immediate, ongoing, and literal, and because it permeates the highest levels of American government and is prevalent in our media and public schools – unworthy of his attention as an educator, and the rights of abortion’s victims irrelevant to his self-professed patriotic duties.