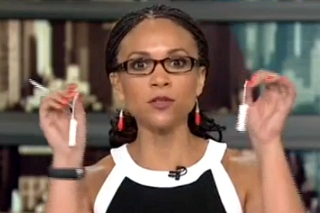 The worldwide excitement over the royal baby has seemingly upset pro-aborts, who feel the need to break and in and remind everyone that they shouldn’t be so excited, because ABORTION! It’s as if they took a class on how to rain on someone’s parade. Only in the pro-abortion world would it be considered good form to celebrate the birth of a baby by talking about how more babies need to be killed in utero. 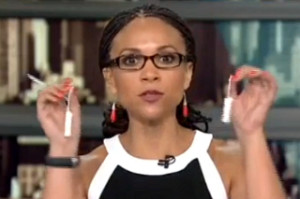 One of the most ludicrous examples of the royal baby-abortion phenomenon comes from MSNBC host Melissa Harris-Perry, whom you may remember as the anchor who wore tampon earrings. She’s also a recipient of Planned Parenthood’s Maggie Award, so you know that she’s really drinking the Kool-Aid.

When Harris-Perry decided to weigh in on the fervor surrounding the royal baby, of course she had to talk about how not every baby is wanted. We can’t have people get too excited about pregnancy and babies, now can we? She then decided to show off her rather unique brand of logic, where it isn’t science that determines when life begins – your feelings do.

“When does life begin? I submit the answer depends an awful lot on the feeling of the parents. A powerful feeling – but not science,” Harris-Perry said on her show Sunday.

Forget everything you know about embryology, pregnancy, and reproduction. What do your feelings say? A baby’s just not convenient right now? Well, then, lucky for you: you can just decide that the baby isn’t really alive yet because you don’t want him to be! And hey, why stop there? What if you feel like your two-year-old isn’t alive anymore, either? If feelings are all that we need to determine whether or not something is alive, then why limit those feelings to pregnancy?

Harris-Perry then put her foot in her mouth even more:

The problem is that many of our policymakers want to base sweeping laws on those feelings.

Well, yes. We pro-lifers would agree. The problem is exactly that: too many pro-aborts want to ignore the science of embryology and reproduction, and want to keep abortion legal on-demand based on nothing but their feelings that an unborn baby isn’t truly alive yet. Forget what science tells us. What does your heart say?

This does make perfect sense, of course. It aligns with the pro-abortion position beautifully. If abortion advocates can obfuscate the truth, and keep the science hidden, then all women have to go on is their feelings. And it’s a lot easier to abort a blob of tissue than it is to kill your unborn child. If we stuck to science, and not feelings, there wouldn’t be any argument over whether abortion should be legal at all. Thank you, Melissa Harris-Perry, for pointing that out so perfectly.