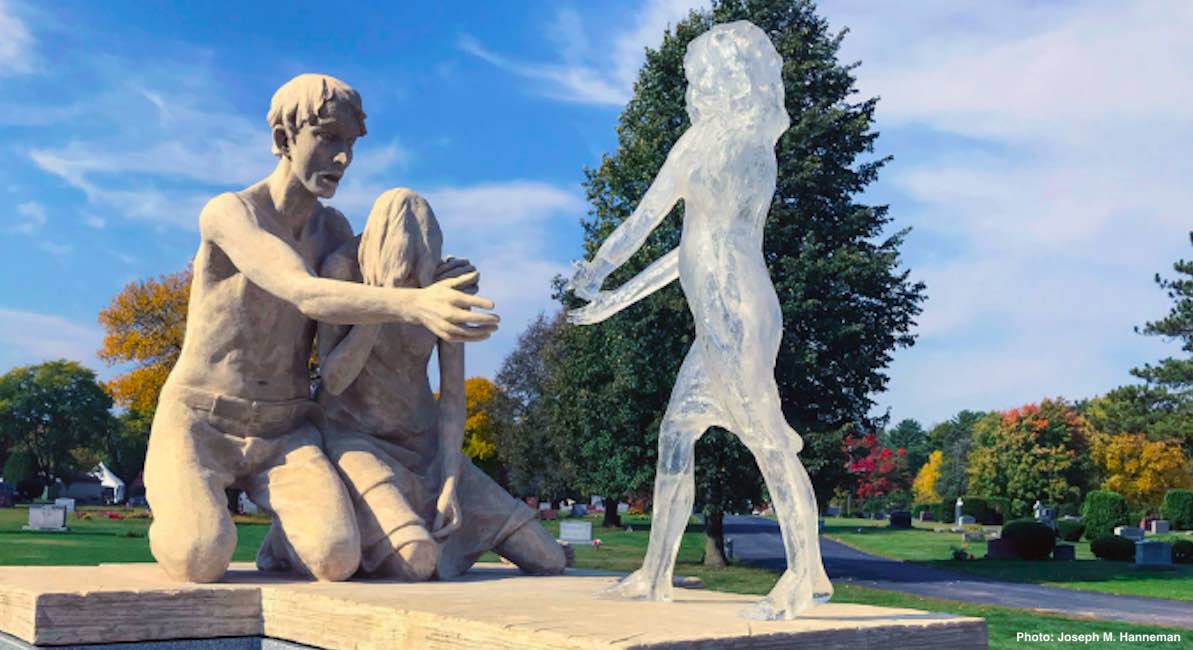 A new sculpture installed at Resurrection Cemetery in the Diocese of Madison, Wisconsin, is dedicated to the memory of children lost to abortion. The powerful sculpture depicts a grief-stricken mother and father and their aborted daughter shown as a young child.

The sculpture, called “The Memorial of Unborn Children II,” was created by Slovakian sculptor Martin Hudáček, whose “Memorial for Unborn Children” of a mother and her aborted child touched hearts in 2010. His new sculpture portrays the pain both mothers and fathers can experience after an abortion.

“The donors of this statue were really moved by it because it had the man there as well,” said Damian Lenshek, director of cemeteries for the Diocese of Madison. “For anybody who’s attracted to the statue and the meaning of the statue, this is going to be a meaningful place for them.”

Hudáček told Catholic World Report that people in Poland came to him with the idea of showing it isn’t only women who regret abortion and weep for their children. Fathers, too, can suffer the effects of abortion trauma. “The statue shows that abortion affects all of society. We should help both mother and father,” said Hudáček. “The story must be told that both are hurt by the loss of their child.”

He added, “The message is that the loss of the child affects the culture of the family. It has a wide-ranging effect. Let us consider unborn children as children. Protect them from the prenatal stage. They are the most vulnerable. Thank God some politics are aware of this and take a responsible approach to this topic.”

Abortion trauma has been denied by the abortion industry, but women who have experienced abortion share heartbreaking stories. Some women feel the effects of abortion trauma immediately, but others may not feel the full weight of their choice for decades. Men have also spoken out about the pain they have felt regarding lost fatherhood due to abortion.

Abortion has been shown to increase women’s risk of depression, drug use, alcohol use, suicidal thoughts, and suicide. The grief that women and men feel is deep and profound, but they are told by society that abortion is a right, and therefore, they often suffer in silence.

Editor’s Note: If you are struggling after an abortion, please visit Rachel’s Vineyard or Hope After Abortion.