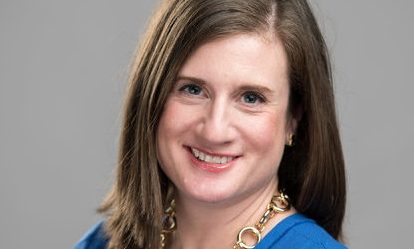 NARAL Pro-Choice America has named Adrienne Kimmell as its new acting president, after longtime president Ilyse Hogue announced her impending departure in February. Kimmell presently serves as the organization’s Chief Research and Communications Officer and formerly worked with Planned Parenthood Federation of America as a legislative affairs manager, as well as with Planned Parenthood affiliates in Florida and Massachusetts.

“Adrienne Kimmell has been named Acting President. Adrienne has been on NARAL’s senior leadership team for nearly four years as the Chief Research and Communications Officer, and will serve as Acting President until a permanent President is found to replace President Ilyse Hogue, whose last day will be May 28,” NARAL wrote in its news release. 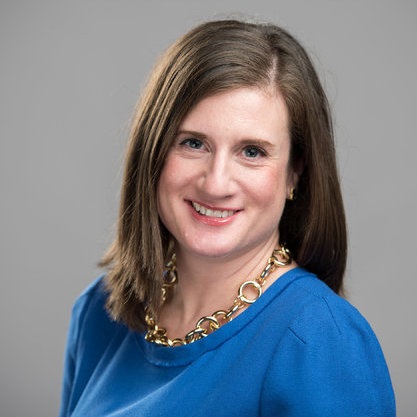 Kimmell has actively attacked pro-life Pregnancy Resource Centers (PRCs) claiming in 2018 that the centers, which offer services for women and men completely free of charge (i.e. parenting classes, STD testing, pregnancy testing, baby gear, furniture, diapers, clothing, maternity housing, employment assistance, referrals to other social services, and more), were “intentionally positioning themselves in or around Black neighborhoods.” Whether this is true or not was unclear, as Kimmell offered no evidence for her assertions.

However, Kimmell and NARAL have little to say about Black Americans’ claims of eugenic targeting of minorities by the abortion industry. Kimmell is also likely well aware that two of NARAL’s three-member pre-formation planning committee were men who held and promoted radical racist, eugenicist ideas about population control and even advocated for coerced sterilization. Read more about that history here.

Kimmell has also called PRCs “fake,” accusing them of being deceptive. In fact, it is NARAL that has deceived the public entirely for decades — according to one of its own founders, former abortionist Bernard Nathanson.

Nathanson admitted that he and others within NARAL (then known as the National Association for the Repeal of Abortion Laws) disseminated a completely fabricated statistic claiming thousands or tens of thousands of women were dying from illegal abortions each year when this was not the case. They did this to sway popular opinion in order to decriminalize abortion prior to the Supreme Court’s Roe v. Wade decision.

That lie was successfully used to persuade lawmakers to rule in favor of legalized abortion. In the end, women’s lives have remained in peril, as many have now died or been injured from legal abortion. On this, NARAL and Kimmell are silent.

“NARAL is in great hands with [Kimmell] until the baton is passed,” Hogue tweeted. “With her leadership and that of…so many others across the organization, membership and Board, I am so excited for the future of this amazing team.”

But if change is what NARAL’s employees want, Kimmell hasn’t signaled this will be the case. In fact, in response to the announcement, Kimmell vowed to continue Hogue’s “vision,” tweeting, “Some personal news (as they say) – so grateful for @ilyseh‘s vision and leadership and excited to continue our important work advancing reproductive freedom with the amazing Team @NARAL in this transition period” 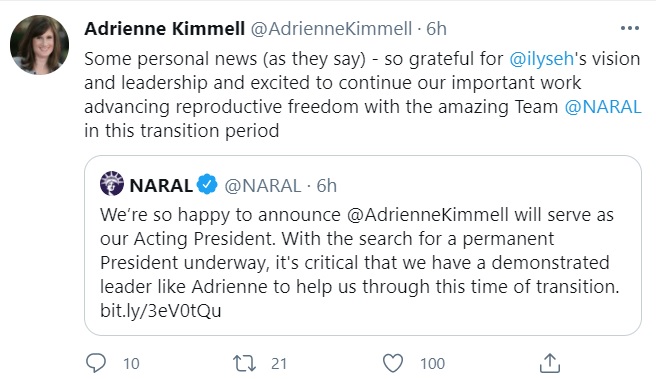 Alleged former NARAL staffers and interns later emerged on Twitter to confirm the toxic working conditions at the abortion rights organization. In a series of tweets, one former NARAL staffer stated, “After repeatedly calling the org in for racism/classism/transphobia NARAL leadership began began extensively surveilling my social media and community activism and tracking it in private group chats.”

But, in announcing its leadership change, NARAL now claims it has a “commitment to diversity, equity, and inclusion” and will implement these virtues in its “search for a permanent president.”

Regardless of the leader NARAL eventually selects, the organization’s eugenicist history and present racism issues are significant.