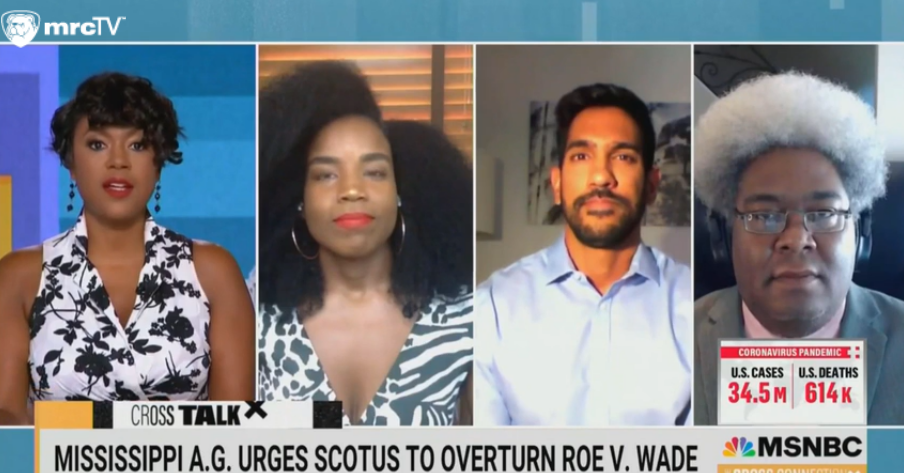 An MSNBC panel on Saturday attacked pro-life advocates and conservatives for allegedly treating women like “incubators” while also taking aim directly at Supreme Court Justice Amy Coney Barrett, calling her a “real-life Handmaid.” MSNBC’s “The Cross Connection,” hosted by Tiffany Cross, featured a panel created to discuss the upcoming Supreme Court case Dobbs vs. Jackson Women’s Health Organization, regarding Mississippi’s 15-week restriction on abortion. On the panel were Felice León of The Root and Elie Mystal from The Nation.

According to Fox News, León first smeared Mississippi Attorney General Lynn Fitch as a “wealthy white woman” whose pro-life beliefs she considers an attack against women of color.

“We also know that women of color, and low-income women, get abortions at higher rates than white women and more affluent women,” said León. “So any law will impact my sisters, my black and brown sisters in Mississippi for sure, and this really shows that the attorney general ultimately is a wealthy white woman who is acting in the interest of conservatives and other wealthy white women.”

READ: A look back at 2020: Racism and white supremacy exposed within abortion industry

But Fitch, as the attorney general of her state, has an obligation to protect the constituency she sees are being preyed upon by a vastly unaccountable abortion industry. Women of color statistically have a higher abortion rate than white women, not necessarily because they want abortions, but because the abortion industry targets certain people groups — and Planned Parenthood has had a laser focus on Black and minority women since its inception that continues today. Sixty-four percent of women who have had abortions say they were pressured to do so.

Mystal then added that Fitch is treating women like “they’re incubators with mouthparts.”

No one believes women are “incubators with mouthparts,” but their preborn babies are human beings who deserve to be protected. At 26 weeks, a woman is more than halfway into her pregnancy and her baby is capable of surviving outside the womb with medical assistance. There is no reason to have an abortion at any point in pregnancy, but at 26 weeks the baby is well beyond the age of viability — which currently sits at about 21 weeks. Even if the mother’s life were at risk, the baby could be delivered safely and quickly via an emergency C-section while an abortion at this stage would take days.

The panel also mentioned the Hulu series “The Handmaid’s Tale” — a show based on Margaret Atwood’s dystopian novel in which a fertility crisis leads the ruling class of men in the Republic of Gilead (New England) to force young women to produce children for them. Mystal and Cross ridiculously compared pro-lifers to these men in Gilead.

U.S. law does not allow women to be forcibly impregnated by men, whether they are in relationships with those men or not.  Pregnancy is most often the biological result of consensual sexual activity. Pro-lifers are not forcing women to become pregnant; they are asking that women don’t kill the babies they have already conceived.

In reality, “The Handmaid’s Tale” sounds more like the modern-day “rent women’s bodies” trend of surrogacy, in which women are paid by wealthy couples to carry babies for them at the expense of their own bodies. Surrogates are treated as incubators, some of them sacrificing their own lives and being forced into abortions when the couple changes their mind or the baby is diagnosed with a health condition. Other women act as egg donors, sacrificing their health. It is this movement — in which women are actually used for their bodies to create children for other people — which mirrors the dystopian future in “The Handmaid’s Tale.”

The lies that built the abortion industry are crumbling, making abortion advocates change their strategy to focus on attacking good people working to do the right thing and end legalized abortion once and for all. Abortion advocates know that most Americans want abortion restricted to the first trimester — which Mississippi’s law would do. Instead of being truthful, they would rather belittle pro-life women like Barrett and Fitch.