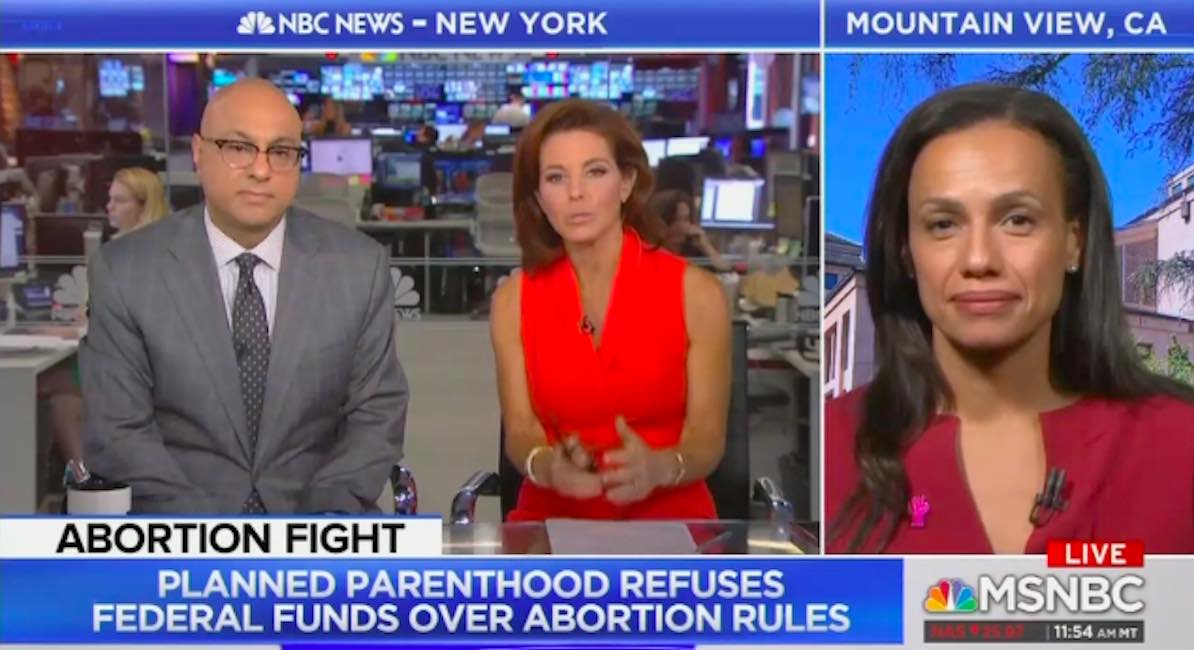 Note the New York Times headline below, from August 19:

Planned Parenthood was not “forced out” like you are being told. PP made a “choice” to keep #abortion which is their $$$ machine- rather than help low income women – #TitleX #protectX #HHS #prolife pic.twitter.com/WajOlZ1S1V

According to the media narrative, the Title X rules force doctors to give sloppy “care.” In her MSNBC interview, Planned Parenthood’s acting CEO Alexis McGill Johnson framed Planned Parenthood’s decision to leave the program as an act of ethical principle in response to immoral pressure. “Trump and the Trump Administration are essentially bullies. They are forcing us out of a program by endorsing and enforcing this unethical ‘gag rule.’ We’re just not going to engage in providing substandard care for low-income women.”

Yet to be clear, the only change under the Trump administration’s new rule is that Planned Parenthood centers would not be able to refer for or provide abortion in any facility funded by Title X dollars. Despite the fact that abortion is not healthcare and is never medically necessary, McGill Johnson’s unspoken claim is that the ability to commit or even refer for abortions constitutes such a vital “care” that Planned Parenthood has chosen to withdraw from the Title X program.

READ: Over half of Planned Parenthood’s non-government revenue still comes from abortion

Stephanie Ruhle, using a recurring theme from the narrative propped up by MSNBC’s coverage, framed the issue as impacting low-income women: “What happens to those women who don’t engage in politics but need health services?”

But in reality, just how many women are being affected by Planned Parenthood’s decision to forego Title X funds? Over half of Title X patients, 59%, are not going to Planned Parenthood for their Title X services, as previously reported by Live Action News. This information is clearly stated on Planned Parenthood’s own website, and was even highlighted on an informational screen on Andrea Mitchell. When it comes to contraception, 68% of patients use that benefit at other publicly-funded providers. As documented by Live Action News, Federally-Qualified Health Centers outnumber Planned Parenthoods 20 to 1, and 87% of Title X facilities are not Planned Parenthood facilities. Patients will be able to receive their Title X benefits elsewhere, just not from a national business which makes over half of its non-governmental income from abortion, which covers up rape and sexual assault, and which pressures women into abortions.

Life-affirming options, like adoption or carrying the pregnancy to term, are rarely offered at the abortion corporation. In 2017, according to the organization’s most recent annual report, Planned Parenthood made just 2,831 adoption referrals compared with 332,757 abortions it committed that year.

In reality, McGill Johnson’s comments reveal what is likely the true purpose of Planned Parenthood’s Title X public relations campaign: to ever increase Planned Parenthood’s vast government funding. “You don’t fundraise your way out of basic healthcare service. This is something that should be the responsibility of the federal government to backfill,” she said.