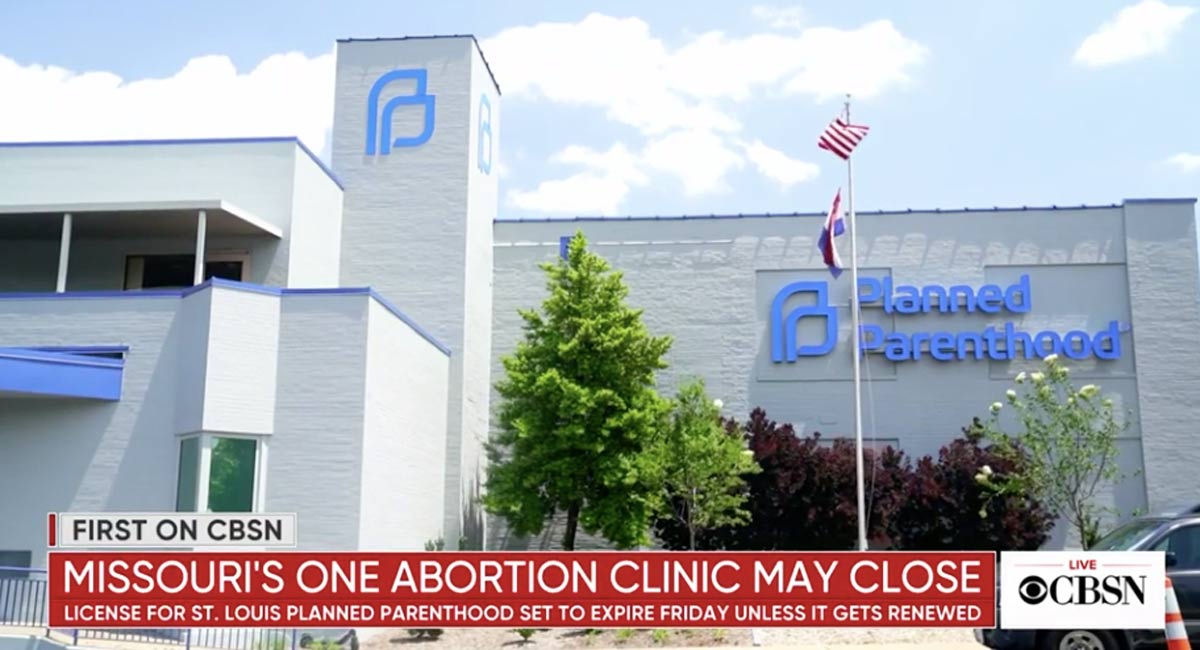 UPDATE,  5/31/19: A slew of unresolved health violations and questions apparently won’t keep the country’s “most dangerous” abortion facility – the only one in Missouri – from continuing to operate. According to local station WTHR, a judge has issued a temporary restraining order allowing Planned Parenthood of the St. Louis Region to remain open despite the expiration of its operation license, until a ruling is issued. Planned Parenthood, for its part, is seeking a permanent injunction against the closure:

St. Louis Circuit Judge Michael Stelzer issued a temporary restraining order preventing Missouri from taking away the clinic’s license. He said Planned Parenthood “has demonstrated that immediate and irreparable injury will result” if its abortion license is allowed to expire.

The clinic’s license “shall not expire and shall remain in effect” until a ruling is issued on Planned Parenthood’s request for a permanent injunction, according to Stelzer’s ruling. A hearing is set for Tuesday morning.

“Immediate and irreparable injury” – an interesting choice of words for this facility, which has sent at least 74 women to the hospital over the past decade.

WTHR notes that the MO Dept. of Health has concerns with “failed abortions” and “compromised patient safety and legal violations at the clinic,” and had been attempting to interview all the physicians involved with the facility, to no avail.

Planned Parenthood accused the state of “‘weaponizing’ the licensing process,” and sued. The facility’s license was set to expire at midnight Friday, and the facility had been aware of the expiration date for quite some time.

5/28/19: Planned Parenthood of the St. Louis Region, also known as Reproductive Health Services, is the only operating abortion facility in the state of Missouri. Considered by pro-life groups to be the most dangerous abortion facility in the nation, it appears to be in danger of shutting down due to difficulty in gaining a renewal of its license by the state, reports CBS News. There are several reasons for this, none of which have to do with the state’s newly-passed eight-week abortion ban. The first two reasons are easy enough to remedy, according to Planned Parenthood, but the third — a slew of unresolved health and safety violations — might not be so easy to overcome.

Planned Parenthood president Leana Wen sounded the alarm today, saying, “This is not a drill. This is not a warning. This is a real public health crisis.” Wen, predictably, blames the Trump administration’s pro-life policies. But just as Planned Parenthood’s multiple closures in recent years have little to do with pro-life legislation, the same applies here.

The real public health crisis is what’s been going on unchecked at this abortion facility for years, and which Wen conveniently doesn’t mention. This particular Planned Parenthood facility has had more than 72 ambulance calls (Operation Rescue now reports 74) since 2009. Not only are they killing preborn babies at this Planned Parenthood, but they’re also maiming women. In addition, multiple health violations have been racked up over the years at this one facility.

According to CBS (emphasis added):

On May 22, Planned Parenthood said it would address two of them: adjusting who at the clinic provided the state-mandated counseling and adding an additional pelvic exam for abortion patients.

But it said a third request was out of its control. According to Planned Parenthood, the health department said it was investigating “deficient practices,” and needed to interview seven physicians who provide care at the clinic. Planned Parenthood said it could offer interviews only with two who are its employees. The remaining physicians provide services at the facility but aren’t employed by Planned Parenthood and have not agreed to be interviewed.

In its letter, the Department of Health wrote that it could not “complete our investigation until it interviews the physicians involved in the care provided in the potential deficient practices,” and that “the investigation needs to be completed and any deficiencies resolved before the expiration of [the clinic’s] license on May 31, 2019.”

How many women would feel safe in knowing that only two of the seven physicians at the facility are actually employed by Planned Parenthood, and the rest seem wholly unaccountable to the state Department of Health?

And regarding “potential deficient practices,” what might those be? Planned Parenthood says it has no idea. Planned Parenthood physician Colleen McNicholas told CBS News, “We are 100 percent committed to the best care that we can provide for patients. So certainly if there is an issue with the care we’re providing we want to know about it. We want to be able to address that. But we can’t do that when we’re being attacked.”

But McNicholas and her coworkers should be aware that Planned Parenthood’s deficiencies are public knowledge.

According to the link in the Facebook post above to CheckMyClinic.org — which includes links to all of the actual health department reports from this Planned Parenthood which found deficiencies — many of the violations are serious, and include things like repeatedly using expired medications and supplies, repeatedly “using single dose injectable medications for more than one patient to ‘save money,'” not logging abortions past 18 weeks, failure to properly sterilize instruments before use on other patients, failure to train employees in infection control procedures, and much, much more.

This is what a preborn child looks like at 18 weeks:

See screenshots of the facility’s violations below: 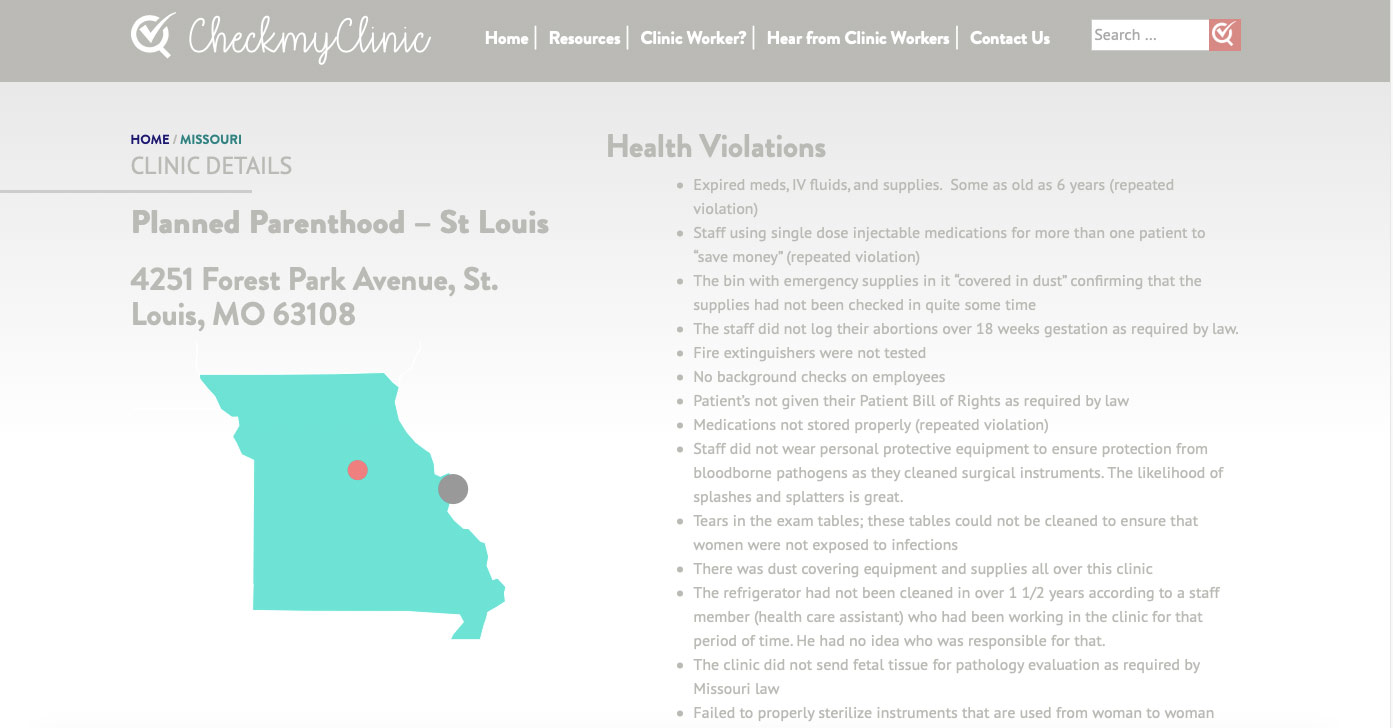 And that’s just the ones that are documented to have taken place on the day of surgery, at the actual facility. All other post-procedure complications would be seen at hospital emergency rooms, not on-site at Planned Parenthood. Bottom line: this Planned Parenthood isn’t safe.