Mother’s Day is about celebrating mothers — women who have made great sacrifices to carry their children, birth them, place them with adoptive families, or raise them. Yet abortion advocates are, as usual, attempting to celebrate abortion on Mother’s Day. Abortion is the intentional act of killing a child while she is still in her mother’s womb and is never something to be celebrated. To do so is inhumane and cruel to both babies and women.

The pro-abortion group NARAL took to Twitter on Mother’s Day more than once to feign concern for mothers in tweets that seem like cruel jokes at the expense of suffering, post-abortive women. One tweet focused on pregnancy loss, stating, “This #MothersDay is also for all the moms dealing with the loss of a child or a pregnancy. Today’s your day, too.”

Yet every day, NARAL works to ensure women can purposefully rid themselves of their children or “pregnancies” through abortion. The organization’s current slogan is “Freedom for Every Body,” yet NARAL promotes the dismembering of the bodies of even preborn children old enough to survive outside the womb. As far as NARAL is concerned, human beings in the womb do not deserve their own natural right to be born — to be free.

But the tweet also mocks the very women NARAL is attempting reach. Women who have suffered miscarriage and stillbirth have noted that the abortion industry frequently compares those tragedies to the tragedy of abortion. While both are losses which cause unimaginable trauma to women, miscarriage and abortion are not even remotely the same.

Women who have undergone abortions are at an increased risk of depression, alcohol and drug use, and suicide. Nearly 74% of women who have sought post-abortion counseling have said that they aborted due to pressure to do so. And a study surrounding the abortion pill found that 77% of women regretted their abortion. Millions of women throughout the United States and the world live in deep regret and sorrow over having chosen to end their baby’s life through abortion — and to tell them to celebrate that decision is twisted and cruel.

Yes, Black mothers (and their babies) do “deserve to thrive”

NARAL’s other offensive Mother’s Day tweet was aimed at Black women, who account for a tragic 34% of all abortions though Black Americans account for just 13% of the population. NARAL was founded on racist, white supremacist beliefs and has failed to condem the systemic racism that exists within the abortion industry, even going so far as to call Planned Parenthood’s blatantly racist founder, Margaret Sanger, a “trailblazer.”

Still, the organization attempted to show support for Black mothers by tweeting, “Black Mamas are forced to deal with systemic racism throughout their parenthood journeys. From prenatal care, to the horrifying rate of Black maternal mortality, to the way Black mothers must contend with police violence—#BlackMamas deserve to thrive.”

Yet NARAL does nothing to actually help save the lives of pregnant Black women or their babies.

Black women have an extremely high abortion rate and Black babies who are born are at an increased risk of death during their first year of life. The infant mortality rate of Black babies is 2.1 times that of white babies. If NARAL is so concerned about Black women and their babies surviving, perhaps it should be less focused on abortion and more focused on prenatal and postnatal care.

Motherhood is never a “punishment”

In addition to NARAL’s tweets, other abortion advocates celebrated abortion in honor of Mother’s Day.

Pro-abortion writer Danielle Campoamor wrote, “#HappyMothersDay to everyone fighting to make sure motherhood is a choice & not a punishment by working to expand access to safe & affordable abortion care. From abortion providers to abortion funds to storytellers to clinic escorts, YOU are protecting the sanctity of motherhood.”

Motherhood is never a “punishment.” A human being’s life is a gift and a child aborted by his or her mother was no less worthy of his or her life than Campoamor’s own two living sons, whom she mentioned while praising her ability to have aborted one child.

A woman’s biological ability to bear a child is what should be celebrated in society, and by claiming it could ever be a punishment, Campoamor is being insulting toward millions of women who are struggling to conceive or who have suffered miscarriages and stillbirths. 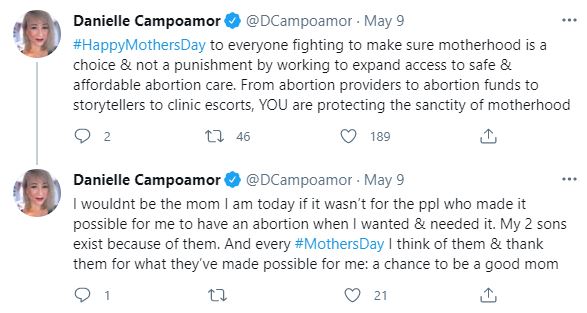 Campoamor claimed that without her abortion she would not be the mom she is today — a truly heartbreaking sentiment. No child should be sacrificed for the perceived “good” of others. No human being should ever be killed so someone else can live their idea of a picture perfect life.