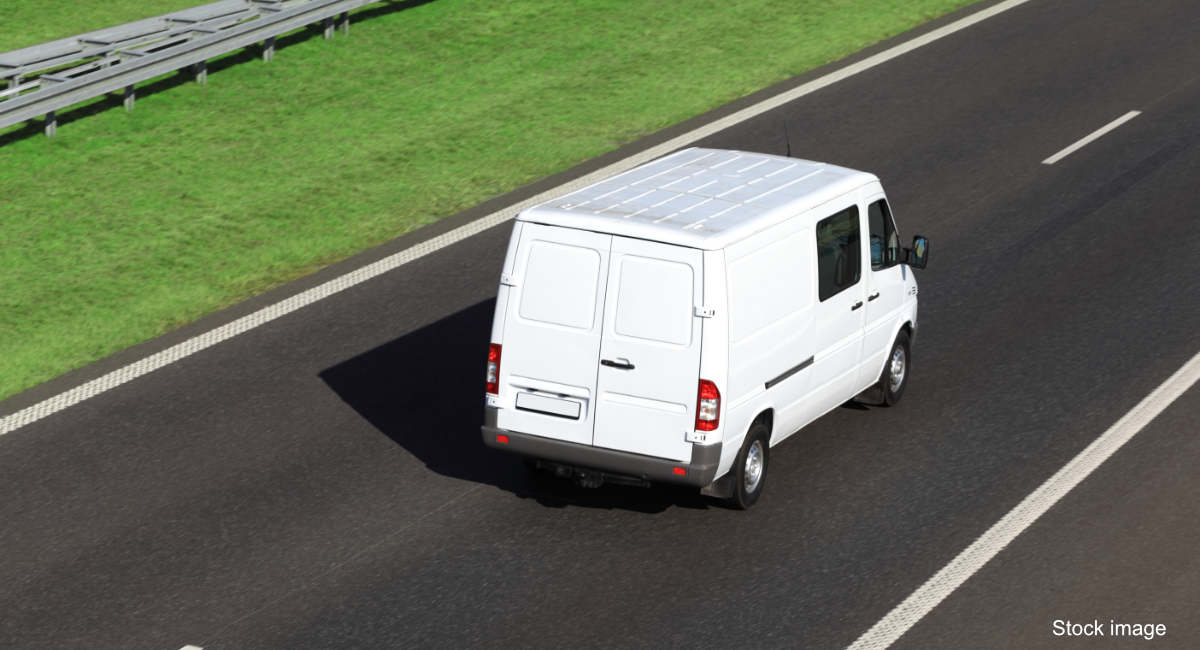 Mobile abortion vans could be rolling into your town and setting up shop near your neighborhood or church, now that the Supreme Court has overturned 50 years of legalized abortion put in place by Roe v. Wade. These abortion businesses on wheels, among the latest efforts to expand abortion, are likely unregulated and potentially dangerous for women.

In what has been dubbed “Abortion Delivered,” the virtual abortion pill organization Just the Pill is converting commercial vans into a fleet of mobile abortion facilities to perform first-trimester abortions on the road in secret locations and neighborhoods. They plan to eventually expand into committing on-the-road second trimester abortions at a later time. 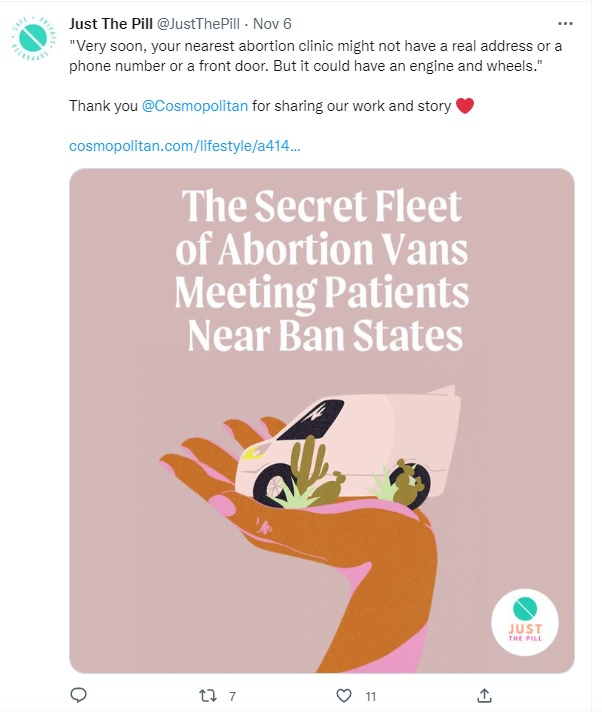 “An anonymous donor kicked in funding so Just the Pill could purchase two mobile clinics of its own — one to provide surgical abortion procedures and one for dispensing medication abortion pills,” Wisconsin Examiner reported, noting that the mobile clinics are unmarked on the outside.

“On the inside, says Amaon, ‘It’s beautiful.’ Like any doctor’s office, each mobile unit has a sink and chairs, an exam table with a curtain that can be drawn around it,” the media outlet added.

“And we are currently fundraising for a fleet,” Amaon said. “All of our mobile clinics are bulletproof.”

According to Cosmopolitan, “each single room van will have a staff of at least four: a clinician, a medical assistant, a driver, and a security guard.”  Building out these mobile abortion vans takes at least eight months and a minimum budget of $375,000, the magazine noted.

“Each single-room van will provide up to 16 procedural abortions per day. Eventually, the group hopes to have an entire fleet of mobile clinics on the road full-time in Colorado, and it’s eyeing New Mexico, Illinois, and its home state of Minnesota next. Also in the works is a larger abortion bus, with two procedure rooms and a dedicated recovery space. This will allow the group to perform second-trimester abortions as well,” Cosmopolitan reported. 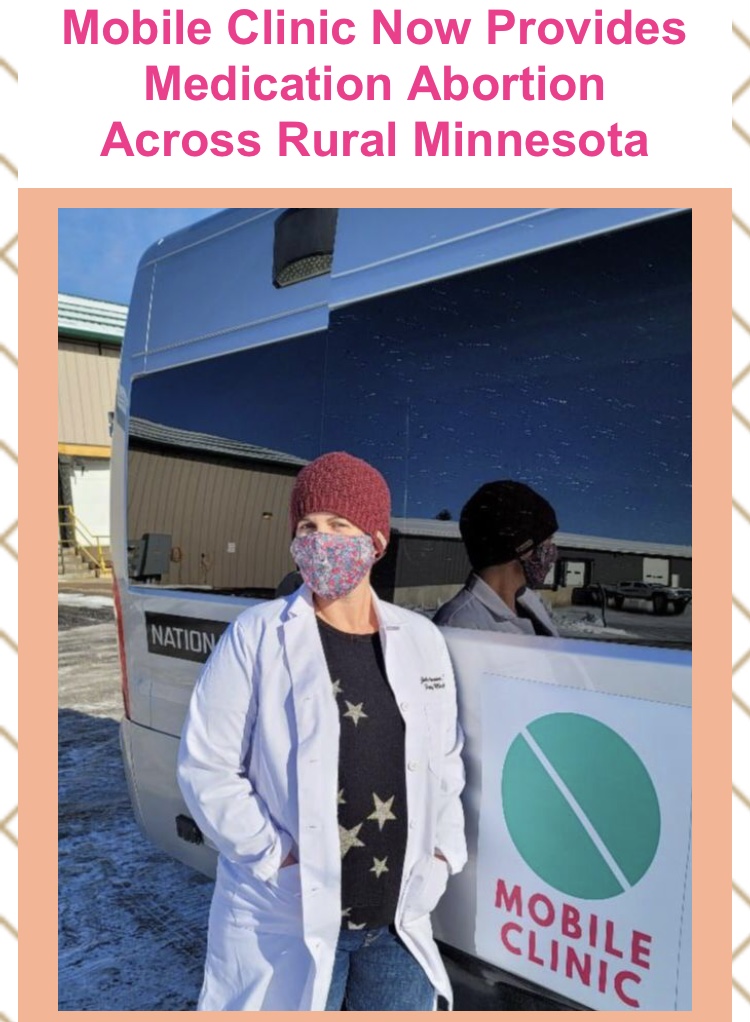 The organization is also seeking to bring mobile abortion vans to the Texas border, according to a published fundraising effort.

Just the Pill advertises through Google ads, and 85% of patients find the group online, Amaon told the Wisconsin Examiner. According to Minnesota Monthly, “Amaon plans to grow the mobile clinic’s services to include gender-affirming care, IUD and nexplanon placement, suction abortion procedures, and other primary-care services for rural areas, where access is limited.”

In October of 2022, Planned Parenthood of the St. Louis Region and Southwest Missouri (PPSLRSWMO) announced the “launching [of] Planned Parenthood’s first-ever mobile abortion clinic in the country. It will serve the border regions of southern Illinois to meet patients closer to where they are.”

According to NPR, Planned Parenthood is “reviewing data to determine where patients are coming from and looking at healthcare facilities, churches, and other locations as potential stopping-off points.” (emphasis added)

“The mobile clinic will begin offering consultations and dispensing abortion pills later this year. It will operate within Illinois, where abortion remains legal, but will be able to travel closer to neighboring states’ borders, reducing the distance many patients travel for the procedure,” NPR wrote.

The “mobile facility” which is “set up inside of an RV” will include “a small waiting area, laboratory, and two exam rooms” and will “offer surgical abortions, likely beginning sometime next year,” NPR also reported. 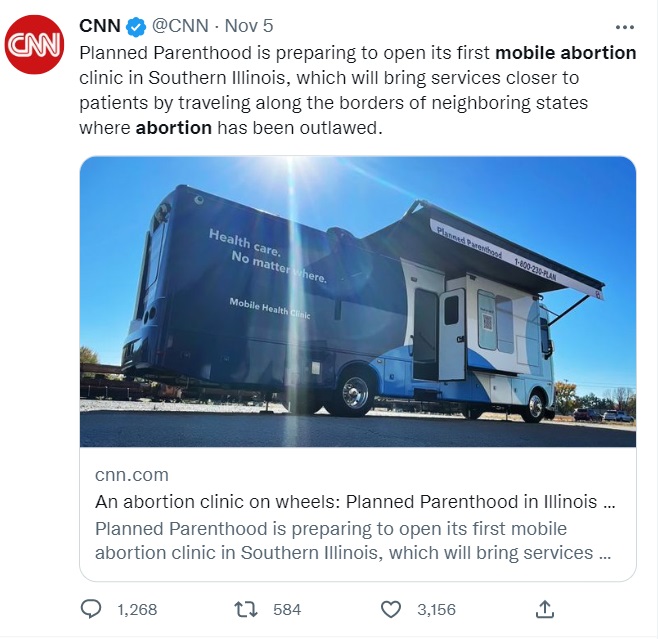 In a virtual press conference, Planned Parenthood described its 37-foot “mobile abortion clinic” as offering the abortion pill so “more people with low incomes” can access abortion. The RV has been retrofitted with a lab, waiting room, and two exam rooms which can be converted to surgical abortion rooms, Planned Parenthood’s spokesperson claimed, adding they it could potentially see up to 30 clients daily.

Planned Parenthood said they hope this will be a model that can be replicated in additional states, and they are working with “other partners” on similar efforts.

Planned Parenthood has implemented mobile vans before, including the Smart Wheels Mobile Classroom as well as mobile family planning units they rolled into minority communities in the 1960s.

According to KWBU.org, “Amaon says they pre-screen patients before scheduling an in-person visit, and reveal the exact meeting location on the day of the appointment. Planned Parenthood says its new unit is developing similar protocols to protect the safety of patients and staff.”