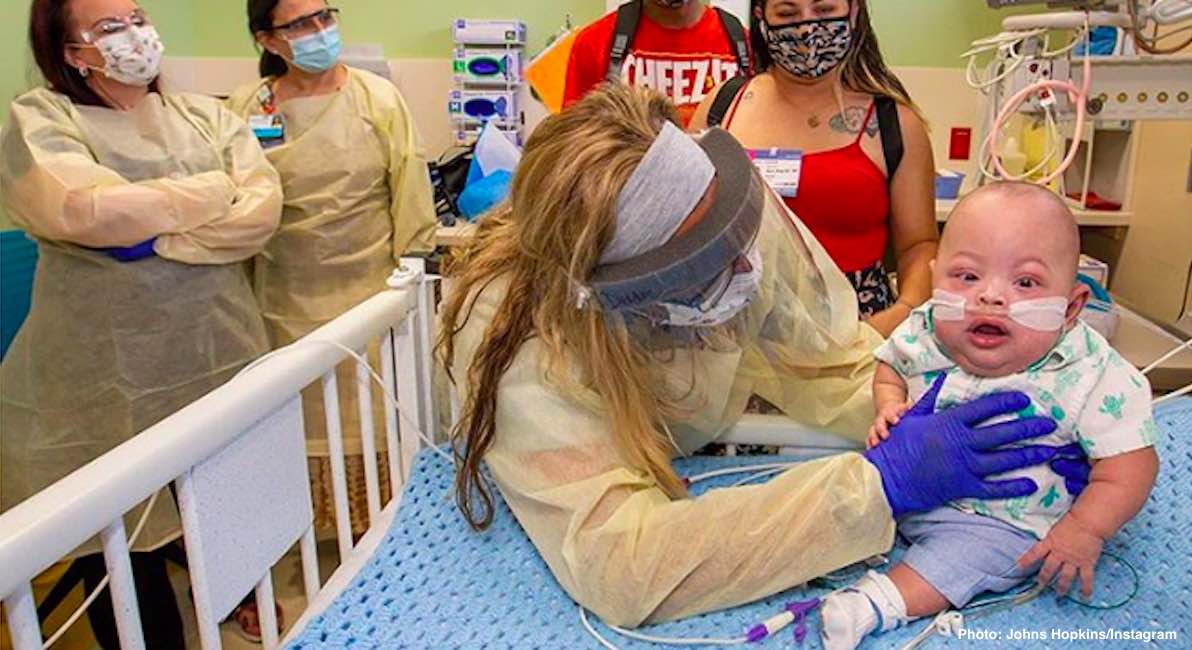 Baby Cannon celebrated his first birthday Wednesday and no one is more grateful than his mother, who wasn’t sure if this day would ever come. Born at just 22 weeks gestation, Cannon weighed only 17 ounces at birth. His chances of survival were low, but he is among the smallest babies to survive at Johns Hopkins All Children’s Hospital.

“He was so sick, I didn’t even get to hold him until he was 11 days old,” said his mother Ashley. “I remember that day. They took pictures of me holding him because no one was sure he would live much longer, and they wanted me to have a special memory.”

According to an article on HopkinsAllChildrens.org, Ashley’s water broke on September 10, 2019. Her due date wasn’t until January 18, 2020. She wasn’t admitted to the hospital, however, until September 16, and Cannon was born within an hour.

HAPPY BIRTHDAY: After weighing just 17 ounces when he was born, Cannon celebrated his first birthday on Wednesday. According to Johns Hopkins All Children's Hospital, Cannon underwent 12 operations in just 11 months before finally being able to go home in August. According to his mom, she went into labor after being pregnant for about 22 weeks. She said, "when he was born, they told me he would probably not make it out of the delivery room," however, the little boy proved to be a fighter.

“When he was born, they told me he would probably not make it out of the delivery room,” said Ashley. “As a new mom, hearing that was very scary.” Her boyfriend, Robert, Cannon’s father, was living in a different state at the time, but as soon as she called him to tell him what was happening, he left work and went straight to be with her for Cannon’s birth.

Cannon overcame multiple complications including brain bleeds, intestinal perforations with infections that required surgeries, and a bowel resection. He required a ventilator as well.

“Cannon had a combination of problems,” explained Jason Smithers, M.D., a pediatric surgeon at Johns Hopkins All Children’s. “We did an airway evaluation and saw that he had severe tracheomalacia, which caused the collapse of the airway when he was breathing.” The surgery helped, but more had to be done and he underwent a second surgery to open his airway. After that, he began to improve. Over 11 months, Cannon underwent 12 operations and finally went home on August 11, 2020.

“I think this kid surprised a lot of people,” said Smithers.

“A lot of times we thought we had lost him. But he always bounced back, which tells you the resilience of children,” said Shakeel. “It also gives us extreme pleasure and rewards in seeing that he is going home in spite of having had a lot of complications.”

Johns Hopkins All Children’s is ranked in the top 50 of the nation’s neonatology programs in U.S. News & World Report’s 2020-2021 list. It has a Level IV rating for the neonatal intensive care unit (NICU), the highest rating given by the American Academy of Pediatrics. There are less than 150 hospitals that are willing and able to help children born as young as Cannon. But with proper medical care, babies as young as 21 weeks have a chance of surviving.

“It’s been a roller-coaster ride,” said Ashley on the day they left the hospital. “There have been as many ups as there have been downs. It was just a matter of taking one day at a time. And today we are going home. It’s a gift and we are very blessed.”