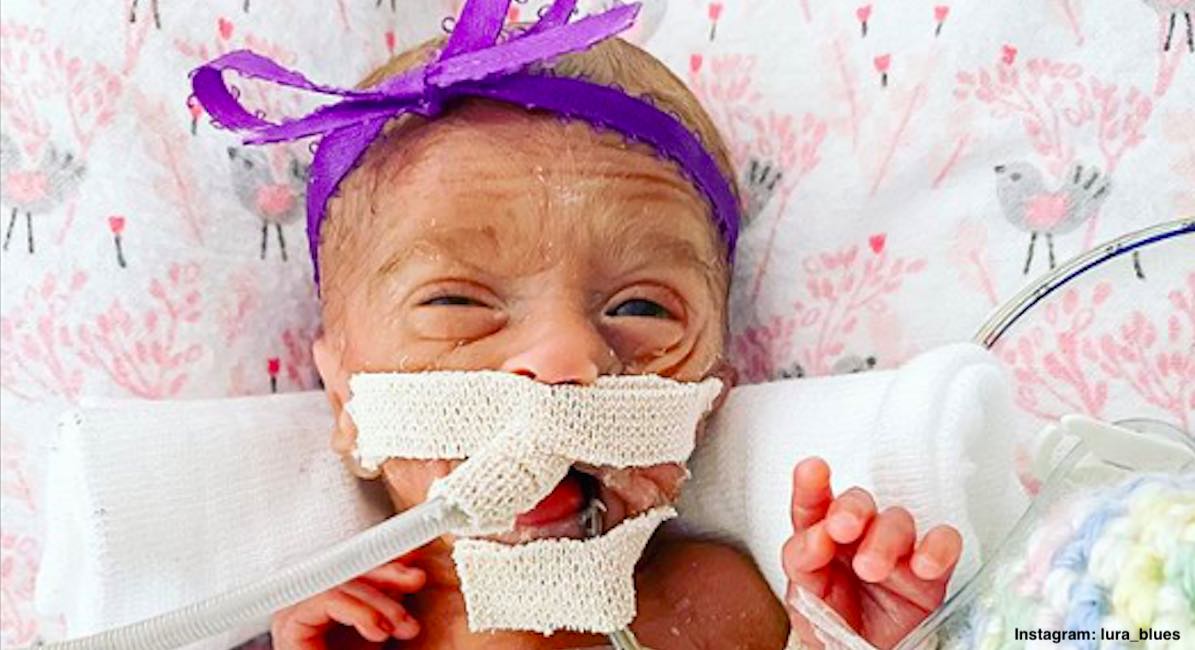 A baby girl born July 15, four months before her due date, is said to be doing well though her twin sister did not survive. The sisters were born at just 22 weeks and two days and were given only a 10 percent chance of survival.

Lura Lauer and her fiancé Ricky Garcia were shocked to be expecting twins, and the pregnancy was a rough one. Lauer had morning sickness every day for the first trimester and much of the second. She began feeling contractions at about 20 weeks. Doctors believed they were Braxton Hicks contractions (false labor) but after a yoga class, the contractions worsened and the couple went to the hospital. By then, Lauer was already three centimeters dilated.

“They gave me medicine to stop the contractions, but then the neonatal doctor came to talk to us,” she told The Sun. “He told us the hospital we were at do not resuscitate if you give birth to a baby at less than 24 weeks. He said if I was to give birth that day, I would have to say goodbye because they’re not viable at that age. They said they didn’t have the capability to care for babies that young. It felt like a nightmare.”

The couple decided to transfer to the Novant Health Presbyterian Medical Center in Charlotte, North Carolina, which was better equipped to handle micro-preemies.

I held my daughter for the first time last night, 2.5 weeks after her birth 🦋 . Nothing prepares you for this. The roller coaster of emotions. The extreme joy and extreme anxiety. The longing desire to hold your baby and keep her close to your heart, coupled with the overwhelming fear of something going wrong. My nerves were at an all time high moments before they placed her on my chest. But shortly after they got her comfortable and situated, immense peace fell over me. I was holding my baby girl and she was holding me. 🥺😭 . I prayed for this moment. I didn’t want it to end. I didn’t want to let her go. But the moment came and went, and soon after she was placed back into her incubator. I know she’s safer in there and that’s difficult to accept when all I want to do is keep her in my arms so I can sing to her and comfort her. I have to put my wants aside for what’s best for her. What a lesson. . She’s still got a long fight ahead of her. Every day brings new challenges for her and she is bravely taking on each one. The nurses and doctors are taking such amazing care of her, better care than I’m capable of giving her right now. I have to release my urge to be in control and let them do what they have to do to keep her safe. Another lesson. . I have to let go of my fears and keep my faith strong. We WILL bring her home one day. We WILL get to hold her close and sing her to sleep. We WILL tell her the story of how she is a miracle from God! I know it in my heart. My mantra has become “Drop the fear, Keep the Faith, & PRAY EVERY DAY” 🙏🏻🙏🏻🙏🏻 . I’m grateful for this moment and hopeful that it’s only the first of many more. Keep praying for Lyric!! I love you 🤟🏼🤍

“Everything felt so surreal at this point, I couldn’t believe that I had already given birth and my girls were in the world,” said Lauer. “The girls were placed in the NICI [neonatal intensive care unit] together and we were able to go see them. We knew they were in a critical condition, being so small and young, but we didn’t expect anything to go wrong yet.”

Two days later, Cali suffered severe brain hemorrhaging and began to decline. She died shortly after. Lyric has undergone surgery for a perforated intestine and suffered from a pneumothorax — an air pocket in the lungs. So far, she has conquered the obstacles she has faced.

“The doctor’s exact words were, ‘She is amazing us every day’, she is truly a miracle,” said Lauer.

“She’s a fighter” 💪🏼✨ . This poor little girl has been through the ringer these past couple weeks. She’s had multiple pneumothorax accumulations, 3 chest tubes put in, an ileostemy surgery on her intestines, collapsed lungs, and a staph infection. But she’s fighting, she’s still here, she’s still breathing, and I thank God every day for this living miracle. . There is nothing that can ever prepare you for this as a parent. Every day is an up and down roller coaster of emotions. I’m told “this is what being in the NICU is like” but no matter what anyone says or does, there is no relieving the anxiety and stress that comes along with this experience. We have to actively try hard to not let fear take over our hearts and minds so we can keep our faith in our daughter. We have to let go, and let God work. . This wasn’t the way things were supposed to happen. But does anything ever happen the way their “supposed to?” None of us have any clue what tomorrow holds, as much as we plan and hope for it. We only have today, right now, this moment we’re in. Does any of the small insignificant crap really matter? The answer is no. All that matters is love. How much love you can show to yourself and others. . I’m so proud of both my daughters, Cali and Lyric. They’ve shown me the magnitude of love that exists all around me. I made them a promise that I would show that love to as many people as I could. I plan on keeping that promise. . Please continue to pray, and give thanks. Our lives are a gift, use yours wisely. I love you all 🤟🏼🤍✨ . #22weeker #nicubaby #nicuwarrior #nicumom #nicumiracle #micropreemie #miraclebaby

Lauer said it is “ridiculous” that many hospitals don’t care for babies born before 24 weeks because they don’t see them as viable. In fact, babies born as young as 21 weeks are capable of surviving. Thankfully, the number of hospitals willing to care for these micro-preemies and give them a chance is growing.

“I think Lyric is an example that — even when doctors are unsure — hope, faith, determination, and love are such powerful energies,” said Lauer. “I believe that’s what’s keeping our daughter alive.”

Mothers from around the world have been reaching out to Lauer through social media to share their own stories of giving birth to micro-preemies. Now Lauer feels that sharing Lyric’s story will help other families going through similar situations.

“I know there are so many women going through the same thing and it breaks my heart for them, because it feels unbearable at times and it physically hurts my heart, it feels so broken,” explained Lauer. “But I have faith, I believe in a grander purpose beyond my pain. […] my purpose is to show how miracles can happen, because Lyric is a miracle and she is meant to provide hope and love during such a difficult time. She is a beacon of hope in hopeless times.”