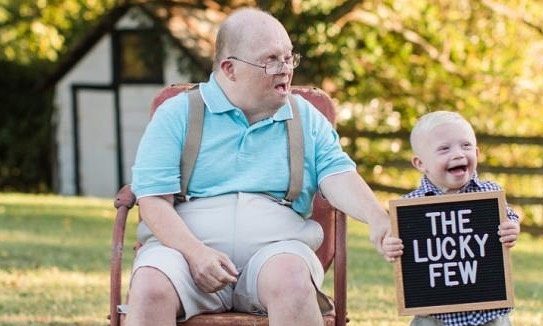 Buddy Wood has Down syndrome, and when he was born, doctors told his parents he likely would not live to age one. Inside Edition reported that Wood lived not only past the age of one, but so far, he has lived a remarkable 65 years. His friends and family have taken the opportunity to celebrate with a party and a beautiful photo shoot.

“It was very common for babies born with Down syndrome to be placed in an institution,” Brittany Cook, the photographer for the special commemorative photo shoot, told Inside Edition. She continued, “Buddy’s parents of course did not do that and brought him home to live with his siblings. At the session, Buddy’s sisters said the reason he has lived to be 65 is because he was shown nothing but love and his parents took the best care possible of him.”

The photo shoot took place when Wood was visiting family in Virginia from his home in Florida. His niece suggested taking pictures of the occasion, and invited a local toddler, Sutton, who also has Down syndrome. The pair are seen smiling while Sutton holds a sign that reads, “THE LUCKY FEW.”

WATCH: Video destroys stereotypes about people with Down syndrome

“The shoot was wonderful. Buddy was so loving to everyone he met,” Cook said. “He just hugged and kissed all of our hands. As soon as Sutton and he held hands, he kissed Sutton’s hand. It was such a special connection.”

As Wood’s life story shows, doctors are often unable to predict outcomes for babies with complex medical conditions. With prenatal screening, parents of children with Down syndrome now often find out about the condition before birth, and face pressure to abort their child. It’s estimated that only 11% of women report receiving a prenatal Down syndrome diagnosis in a positive way. In a survey, 13% of doctors admitted to emphasizing the negative aspects of Down syndrome in an effort to push women towards having an abortion. This deadly discrimination not only ends the lives of innocent human beings, but also denies their family and the world the opportunity to know them and love them.

Stories like Wood’s, and so many others, give parents hope when they are facing an uncertain future for their child.