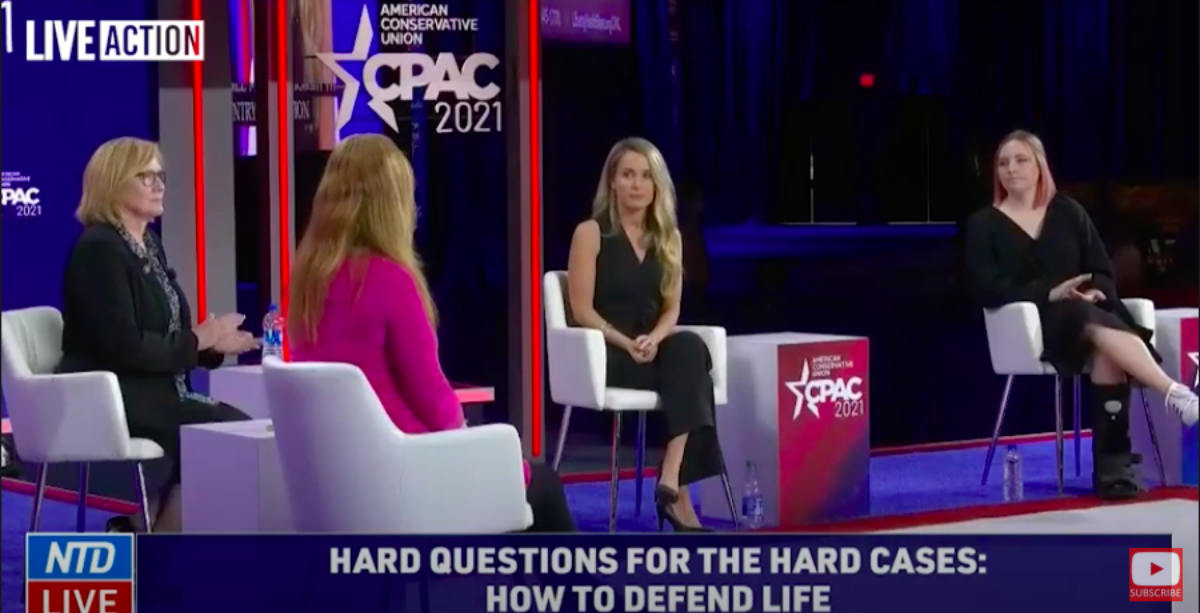 Alison Centofante, Director of External Affairs at Live Action, appeared in a panel at the 2021 Conservative Political Action Conference (CPAC) to discuss the reasons for choosing life even in hard cases. The panel, hosted by Kelly Jane Torrance of the New York Post, also featured Emily Berning, the head of the pro-life organization Let Them Live, and United States Representative Michelle Fischbach (R-Minnesota).

The panel opened by noting that many people are pro-life because of their strong religious beliefs, but the panelists affirmed that the pro-life position is not exclusively religious and that there are scientific and ethical arguments against abortion.

When the panel turned to the question of cases in which some claim abortion is necessary to save the life of the mother, Centofante paused the conversation to clarify. She said, “When we’re talking about abortion, we have to make sure we know what we’re talking about, defining the terms.” She described the scientific facts about the preborn child whose heart is beating at 21 days after conception, detectable by six weeks. She added, “I would be remiss if we had a conversation about abortion and I didn’t share what an abortion is. Abortion is the intentional and direct killing of that innocent baby, via starvation, dismemberment… it’s violent; it’s terrible.”

Centofante continued, “We at Live Action have videos that show a medical animation that change people’s minds on this every day.” The videos Centofante described are not gory but simply show in unembellished animation what occurs in an abortion. Viewing these videos has changed countless minds about the permissibility of abortion.

Turning to the initial question of cases in which the life of the mother is at risk, Centofante said, “To the life of the mother argument I would say this: I thought there were cases, too, at one point, where you had to pick between mom and baby, who’s going to live and who’s going to die.” As Live Action News has covered many times, research and expert opinion in the field of obstetrics and maternal-fetal medicine confirm that intentionally destroying the child in the womb is not necessary to preserve the life of the mother. The goal should always be to treat both. (Editor’s Note: Click here for information on ectopic pregnancy/miscarriage/early delivery.)

Centofante described a situation that could become life-threatening, such as pre-eclampsia or high blood pressure, which usually develops late in pregnancy. Centofante said, “If that baby needs to be separated from that mother, the answer, guys, is early delivery, early induction or C-section, not dismembering that child. There’s no need to go in and intentionally kill that child.” While a child delivered prematurely may not survive, delivering the child early is entirely different from violently dismembering the child and intentionally ending his life.

The consequences of abortion

The panel also discussed the many ways in which women are lied to about the lasting consequences of abortion. Every abortion takes at least one life, and many mothers are left wounded, physically and emotionally. The abortion industry fights regulation and commonsense safeguards to ensure that when there are medical emergencies in abortion facilities mothers have access to life-saving care.

Centofante said, “The pro-lifers will go out and say, ‘We hate abortion, we want it to end, but at least take care of that woman. Make sure that if something goes wrong, because it does, that she’s not left in the front bleeding out, which we’ve heard stories of.’” She referred to the cases of Tonya Reaves and Cree Erwin-Sheppard, two women whose lives were cut short by abortion. Sheppard’s brother, Tyler, discussed his sister’s death in a video for Live Action, below:

When the panel turned to the subject of abortion in the case of disability or life-limiting conditions, Centofante iterated some of the points made recently by Live Action founder and president Lila Rose in a debate about abortion. Centofante said, “We absolutely have to acknowledge the right of that child: that is a human being worthy of our protection, and also look at what the studies show is best for mothers.”

She explained the benefits of perinatal hospice and palliative care in cases in which the baby may only live for a short time. Instead of intentionally ending the child’s life, the family can be given medical support to ensure that the child is not in pain and is cared for as long as the pregnancy lasts and as long as the child is able to be with the family naturally.

Centofante shared a story that illustrated the tremendous difference between these approaches. After speaking with sisters who both experienced prenatal diagnoses of a life-limiting condition, Centofante was struck by the way they spoke about it. The sister who chose perinatal hospice said, “I have memories to share and a story to tell,” while the sister who chose abortion said, “I have a secret that I don’t share.”

No matter how brief, a child’s life can be shared and treasured, an experience that does not involve killing and is best for all involved.

The panel at CPAC highlighted the hard cases so often used to justify the killing of the preborn. As the panelists thoughtfully brought to light, even in difficult cases, choosing life is not only possible but is also the best option for mothers and babies.