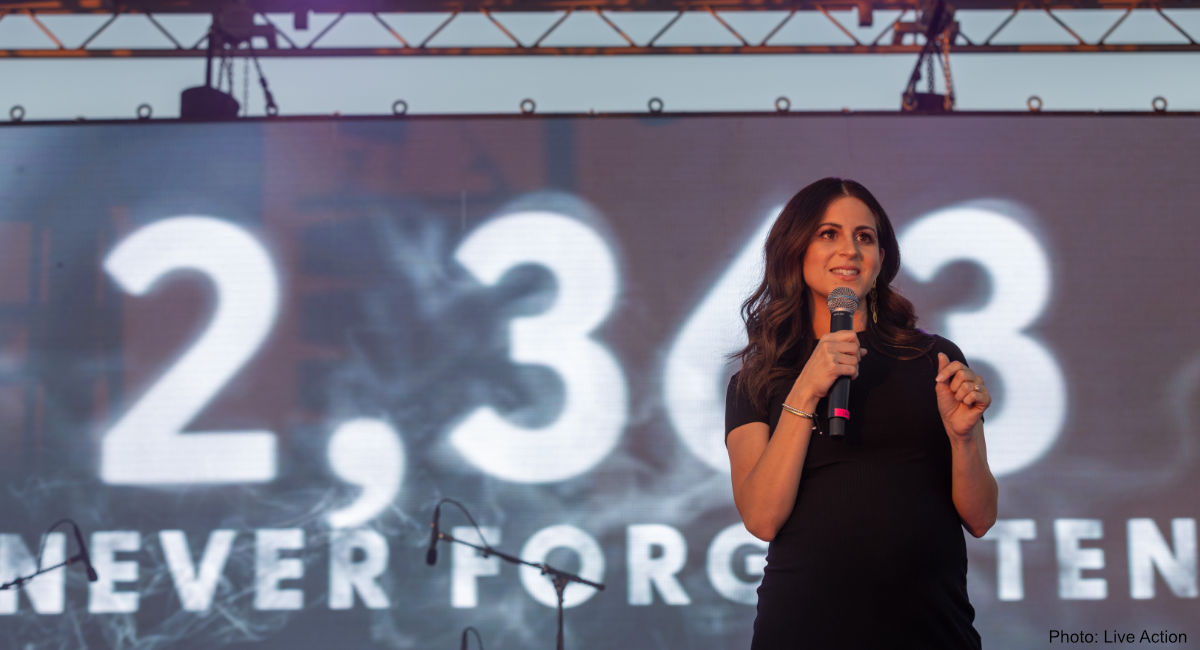 Throughout 2021, Live Action created informative and innovative pro-life content, increasing efforts to reach pro-lifers and abortion advocates alike and continuing to educate on the truth of abortion. Videos like the groundbreaking “Baby Olivia” project, and man on the street interviews, along with political advocacy, events, human interest features, and news articles reached millions and changed hearts and minds.

In 2021, Live Action reached 5.7 million followers across all social media platforms, including Facebook, Instagram, Twitter, and TikTok. The goal of growing Live Action’s social media reach is to be able to transform as many hearts and minds as possible on the issue of abortion.

Live Action’s videos reached a collective, lifetime total of 1.5 billion views in 2021. The abortion procedures videos have educated countless pro-lifers — along with abortion advocates — about what actually occurs during an abortion procedure, helping to solidify pro-life stances and helping many to convert to a pro-life view.

Live Action’s investigative videos have exposed abortion industry secrets, such as the cover-up of sexual abuse and the propagation of lies meant to convince women to abort their babies. Other educational videos include information on abortion pill reversal and current abortion-related cases at the Supreme Court.

Human interest videos, including the story of one of the world’s smallest surviving premature babies, Richard Hutchinson, have helped viewers to see the humanity of young lives inside the womb. Live Action also introduced its first satire video this year about pro-choice men.

Live Action’s groundbreaking Baby Olivia video, released in mid-2021, has already been viewed 23 million times. Viewers from around the world have seen Baby Olivia grow from a single-celled human to a human being with a beating heart, brain waves, fingers, and toes — all the way until birth. Created by Live Action with the support of world-class visual artists and medical experts including accredited OB-GYNs, Baby Olivia is the world’s most realistic and medically accurate animated representation of a child developing in her mother’s womb. Using computer-generated 3D animation and motion capture technology of real human movement, the video reveals the humanity of preborn children — and Baby Olivia has been helping to educate on life inside the womb.

Changing minds with the 2363 Campaign

In 2021, Live Action launched the 2363 campaign with a kick-off rally at the Santa Monica Pier. Unite for Life, a gathering of 2,000 people, included leading cultural influencers and pro-life speakers. The 2363 campaign ads appeared in New York City, Washington D.C., Los Angeles, and Jackson, Mississippi, on billboards, buses, box trucks, cabs — and even in the sky. Digital ads were viewed on music streaming platforms and channels including CNN, Lifetime, Discovery Channel, and BravoTV. Print ads appeared in multiple newspapers, and prayer vigils were held in various cities. Singer Danny Gokey shared his support of 2363 on Instagram.

So far, more than five million individuals have watched the 2363 video, and more than 124 million people saw the 2363 advertisements.

Ohio State Rep. Jena Powell also introduced the 2363 Act, which would ban abortion in Ohio except in the rare situation where a mother’s life is at grave risk (see more here on why abortion is never truly medically necessary).

In May of 2021, Live Action founder and president Lila Rose released her first book, “Fighting for Life: Becoming a Force for Change in a Wounded World” (purchase here). The book is both autobiographical and an inspirational guide to being a force for change in today’s world. Emphasizing that no one’s life is an accident, Rose writes about how to spot false causes, find your calling, and overcome discouragement in the book that has been read by thousands.

Live Action hosted new events in 2021, including an Activism Training Camp and local pro-life rallies around the nation.

The first Activism Training Camp included pro-life speakers such as Christina Bennett of Live Action and Terrisa Bukovinac of Democrats for Life, and training on topics such as tactical advice and pro-life apologetics. It also included the opportunity for the 100 participants to take part in on-the-ground activism, such as a protest at the San Francisco Department of Health, and a peaceful sidewalk vigil outside of the flagship Planned Parenthood on Bush Street in San Francisco.

Live Action’s store has grown over the years, and now includes T-shirts for the family, bags, books, stickers, and hoodies. There’s even an activist coffee mug to help your favorite pro-lifer start the day. When you click to purchase an item in the shop, you’ll receive 10% off your first order when you sign up for the Live Action newsletter.

Live Action continues to grow and expand its educational and lifesaving efforts, thanks to the support of donors and active pro-life individuals.