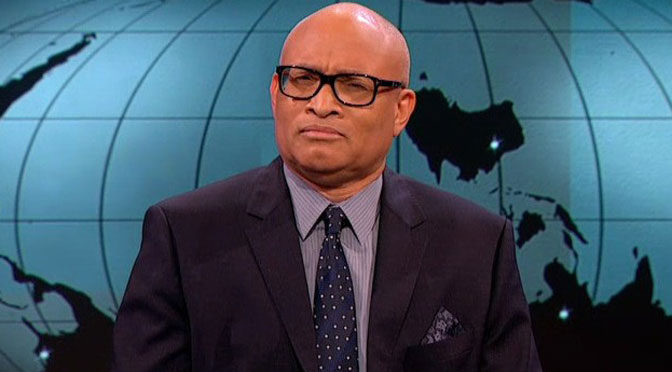 Pro-abortion activists have been utterly shameless in tripping over themselves to exploit and politicize the Thanksgiving weekend shooting at a Colorado Springs Planned Parenthood, and it’s no wonder why—actual anti-abortion killings are so rare that whenever one happens, they’ve got to make the most of the fleeting opportunity to seize the moral high ground.

In a segment that all the usual suspects are hailing (Salon thinks it’s “gutsy” for him to play to his leftist audience’s leftist prejudices), Comedy Central host Larry Wilmore blames Fox News and the Republican candidates for Robert Lewis Dear’s rampage:

Fox and the GOP love making up a big batch of Kool-Aid and doling it out like it’s Jonestown. And they start—no, they start by pouring a pitcher of fact-less accusations, add a splash of fear-mongering, and then they just stir up the base. This time it had to do with Friday’s tragic shooting.

Comparing your political opponents to a homicidal cultist who fed his own followers cyanide: that’s not fear-mongering at all, apparently.

“No more baby parts.” Okay, now, this could be excused as just a nut uttering some crazy thing, but that sounds very specific, “no more baby parts.” I mean, almost as if it was served up in a nice cold pitcher of Fox and Friends Kool-Aid.

Dead baby’s head Buick parts? You know, I have to apologize to my mechanic who, I thought was lying this whole time. “Y’know, looks like your dead baby’s head has gotten loose Larry, sorry, uh, that’s what that clankin’ noise is.”

This is a small point, but can we just take a moment to call out the lesser sin of these Jon Stewart-esque news comedians, that they’re just not funny? The line Wilmore’s mocking here is Mike Huckabee saying Planned Parenthood “rip[s] up their body parts and sell them like they are parts to a Buick.” Satire is when you use humor to illustrate the absurdity of what you’re mocking, but it only works if there’s something there to mock—but Planned Parenthood really was doing what Huckabee said, making Wimore’s sneering just, well, sneering. In fact, Huck’s original line is a more successful example of satire than Larry’s.

But, look. If you think it’s unfair of me to make that connection, here’s the deal: since that baby-parts Kool-Aid was brewed, the FBI has been concerned with escalating violence on Planned Parenthood facilities. [Video plays of CBS News report about law enforcement concerns.]

Finding the correct explanation also requires taking into account something called “evidence,” Larry. Like the fact that Dear lived for years in a secluded shack that probably didn’t get Fox News considering it had no electricity, and was a fringe conspiracy theorist who told people to get metal roofs to keep the government from spying on them. Like the fact that his talk of “baby parts” came amid ramblings so disjointed that police were reluctant to conclude his motive was anti-abortion. Like the fact that he wasn’t registered as a political party member and area pro-lifers had never seen him before. Like the fact that his ex-wife says abortion was “never really a topic of discussion” for him.

Second, Wilmore hangs his entire thesis on how many times Fox and GOP figures repeated the phrase “baby parts.” What he fails to account for (because it would discredit the entire segment) is that they were stating an incontrovertibly true fact. Selling baby parts is literally and precisely what Planned Parenthood was caught doing. Let’s break it down:

The inescapable conclusion, then, is that Larry Wilmore considers it hate speech to merely report the truth about Planned Parenthood’s activities. His complaint isn’t that anybody called PP murderers, compared abortionists to Nazis, etc… but that we stated a fact.

But it’s no surprise that this morally-indignant condescension from one of Stewart’s protégés is really politically-motivated dishonesty—I don’t remember hearing a lecture on overheated rhetoric from Wilmore and his pals when Floyd Lee Corkins said the reason he opened fire on the pro-life, Christian conservative Family Research Council was because the Southern Poverty Law Center called FRC an “anti-gay” “hate group.” Wilmore did, however, deride Fox News for suggesting the Black Lives Matter movement’s rhetoric explicitly glorifying violence against police officers might have a possible connection to shooting cops.

That’s the sort of hypocrisy you inevitably fall into when you’re not acting in good faith. If pro-aborts were as dogmatically bent on stamping out any possibility of violence as their crackdown on pro-life speech is meant to convey, they wouldn’t be supporting abortion in the first place. But the truth is that they are hopelessly committed to perpetuating violence in the womb, so they exploit violence outside of it to distract from the blood on their own hands.