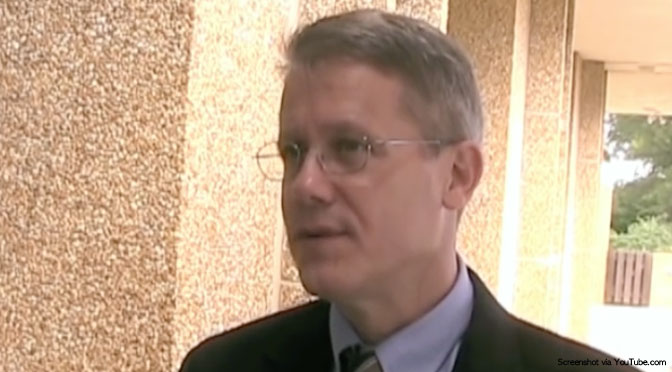 Mike Adams, a criminology professor at the University of North Carolina Wilmington, is no stranger to controversy. An outspoken pro-life Christian who says he used to be a pro-choice, atheist Democrat, Adams has written a number of articles for Townhall.com and has come under fire for his conservative views. Adams has also addressed Planned Parenthood’s sordid history. For this, he says, he was emailed by a professor of sociology and criminal justice whom he has never met – Dr. Richard G. Greenleaf (pictured right) of Elmhurst College in Illinois – who implied that Adams was the inspiration for the shooting at a Planned Parenthood in Colorado Springs, Colorado, last Friday.

Did you correspond with him Mike? Maybe inspire him a bit to complete his mission of murdering a university officer and 2 civilians?…

Adams says he does not know the suspect. But this isn’t the first time Adams has been contacted (read: harassed) by Greenleaf. Adams says Greenleaf emails him anytime there is a mass shooting or tragedy to implicate his involvement, telling The Blaze:

The fact that a professor would email me repeatedly accusing me of being involved in multiple murder conspiracies is truly mind boggling….The fact that he is a criminal justice professor moves it beyond parody. Greenleaf falls short of any reasonable standard of professional competence. His conduct is simply inexcusable….

Professor Greenleaf is a living breathing one man argument against tenure. He has little more to do with his spare time than to write me every time there is a shooting — specifically blaming me for the shooting….

Dr. Richard Gary Greenleaf has co-authored several articles on criminal justice and has been employed by Elmhurst College since August 2008. According to the Elmhurst website, Greenleaf is “the founding director of the criminal justice major at Elmhurst College” and was at one time a “police sergeant in Albuquerque, New Mexico.”  (Albuquerque has long been home to Southwestern Women’s Options, a late-term abortion facility operated by Shelly Sella, one of four third trimester abortionists featured in the pro-abortion documentary After Tiller.)

Greenleaf originally began contacting Adams when he found his class syllabus online and took issue with his use of the term “God-given,” also informing Adams that he needed to have more humility… like him.

When questioned about his emails to Adams, Greenleaf simply said, “Rhetoric has consequences.”