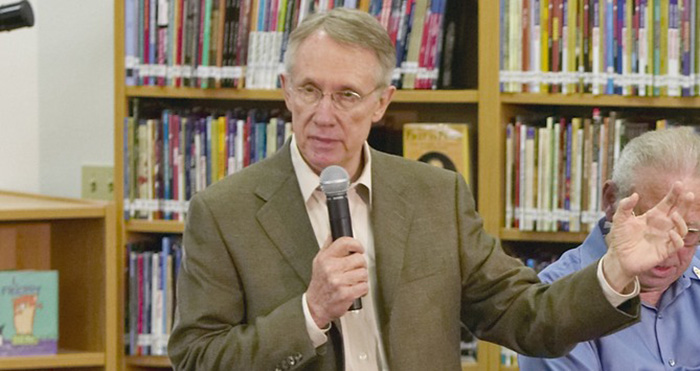 Following Friday’s senseless shooting in Colorado Springs, pro-abortion members of Congress have pounced on the opportunity to politicize the tragedy, blaming the pro-life movement.

Immediately after news of the attack broke, pro-life leaders and candidates across the nation condemned the violence, making it clear that the pro-life movement is about, well, life – not about murdering those who disagree with us.

But that doesn’t matter to pro-abortion politicians seeking to improve their own image, and tarnish the image of their pro-life counterparts.

“We in the Senate should not fail to see the context in which this vile assault took place,” Senate Democratic leader Harry Reid said Monday on the Senate floor. He continued:

I hope everyone understands that I stand with Planned Parenthood. We, as leaders, must be mindful of our words and actions. Whipping people into a frenzy of hate and anger while providing them with easy access to firearms has proved disastrous in this country.

So, calling for investigations and standing against big business abortion is whipping up a frenzy of hate and anger and encourages violence? Really? Does the same apply when the pro-abortion side stands against pro-life institutions or politicians?

Reid’s statement is a clever one-two punch at conservatives: first associating the shooting with the “words and actions” of pro-life leaders, and second grabbing the opportunity to speak out against firearm policies. Talk about using the shooting for your own political advantage.

But Reid wasn’t the only Senator to jump at the chance to demonize pro-lifers. Senator Barbara Boxer (D-CA) said:

Since 1977, there have been 11 murders, 17 attempted murders, 42 bombings and 186 arsons against abortion clinics and providers. It is time to stop the witch hunt against Planned Parenthood, stop the demonizing rhetoric and disband this [investigative] committee immediately.

Once again, this statement clearly compares the senseless violent acts of a few nutjobs to the mainstream pro-life community. It’s outrageous.

The pro-life community strongly condemns any violence toward Planned Parenthood or any human being—born or preborn. The movement seeks to change unjust laws, not to kill and terrorize – such acts of violence are the opposite of “pro-life.”

Pro-abortion senators know this, but instead of being honest, they seize the opportunity to demonize pro-lifers. This is clearly bogus political maneuvering and it’s time for it to stop.