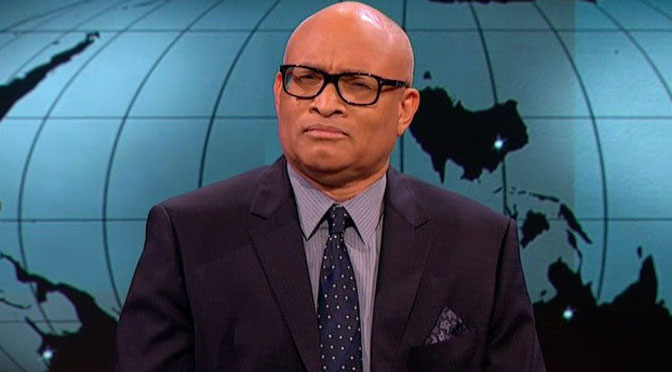 Last seen declaring that it incites violence to accurately describe Planned Parenthood’s activities, comedian Larry Wilmore is now turning his smug propagandizing to the travesty that Harris County, Texas’s Planned Parenthood investigation has devolved into—or, as he so charmingly put it, “the people who made those bulls*** videos lying about Planned Parenthood selling body parts are the ones being charged.” And if there’s anything Comedy Central knows, it’s how to deliver lies with enough condescension that studio audiences mistake it for righteous certainty:

On this show we spend a lot of time talking about miscarriages of justice. Well tonight, we have an honest-to-goodness carriage of justice. The good news comes amazingly from Texas. Remember those undercover videos taken at Planned Parenthood over the summer that supposedly showed them illegally selling fetal tissue? Well, it turned out not to be true, and Planned Parenthood has been cleared.

The only evidence Wilmore posits for these findings? That the grand jury said so. That’s it.

Just like his Comedy Central colleague Trevor Noah, he doesn’t feel the need to at least go through the motions of how the jurors arrived at these conclusions or how rational they are. No explanation of what PP personnel could have meant by “it has to be big enough that it is worthwhile” or “do a little better than break even” if not illegal profits (or any of the other crimes their own words allude to), no mention that the “intent” requirement of the law David Daleiden is accused of breaking was not met, and no response to the defense argument that Daleiden’s use of a fake ID for journalistic purposes doesn’t meet the law’s “intent to defraud or harm” requirement.

Here’s the thing about bulls***. People remember it a lot more than they remember the truth. Right?

Sounds like his own side’s tactic of chanting “deceptively edited videos!” no matter how many times it’s confirmed the videos were accurate, doesn’t it? It’s also the tendency he tries to exploit in this very segment: nobody watching will remember the facts, because Wilmore didn’t mention any. All people will take away is the sense of confidence he projected in what he was saying.

Next, Wilmore complains that “even if Planned Parenthood has been cleared, in most people’s minds, or in some people’s minds, they’ll incorrectly be associated with this,” followed by the same video clips of people repeating that PP sold “baby parts” he freaked out over last time. “No they didn’t!” he shouts, with no greater recognition than last time that his montage contained 100% accurate statements of what Planned Parenthood did, not even containing any of the claims (like illegal profit) that are (weakly) disputed. Sorry, Larry. Not even an A for effort this time.

So the damage has been done, especially when people are predisposed to wanting to believe something.

Yeah, isn’t it just the worst when people believe falsehoods out of their personal biases regardless of where the facts lead them? Larry and his dutiful audience might want to look up projection.

It’s like when Donald Trump spread those bulls*** lies about Obama being born in Kenya. So then Obama produces his long-form birth certificate but it doesn’t matter. Guys, this is true: 20% still don’t think he was born here. I don’t have a joke for this, I just want the s*** to sink in. This is the power of bulls***, all right? In fact, this is another true number, 43% of Republicans still think he’s a secret Muslim. Are you kidding me?

It’s true that people believe nonsense in higher numbers than we’d like, though it’s a more equal-opportunity problem than Wilmore will admit; there are also polls showing 50% or 54% of Democrats believing that George W. Bush knowingly let the September 11 attacks happen.

More importantly, it’s outright demagoguery to equate fact-based dissent from the abortion lobby’s propaganda with fringe conspiracy theories that most responsible people on both sides reject… especially when real conspiracy theorists tend to more closely resemble those who fear looking at the facts.

There’s a particular word for this segment, which Larry Wilmore repeated throughout it. For the sake of decorum I won’t repeat it, but I trust that most readers know which one it is, and will arrive at the same conclusion.