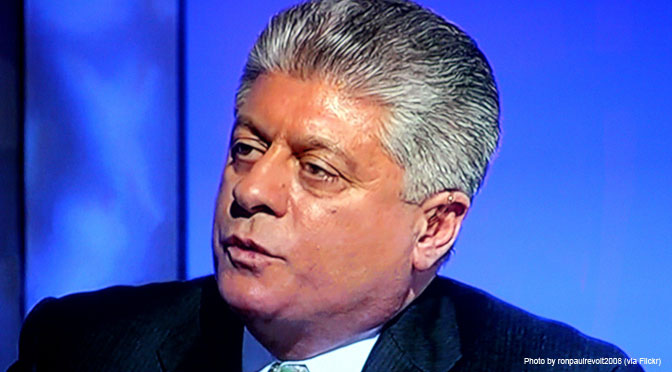 “Absolutely this is a political hit job,” said Napolitano to Megyn Kelly.  “You used to practice law.  I used to be on the bench.  We both know a skilled prosecutor can get a grand jury to indict anything.  The favorite phrase is you can get a grand jury to indict a ham sandwich if you want.”  Napolitano noted that the prosecutors’ monopoly over the information brought before the grand jury plays a role in the startling outcomes that sometimes follow such investigations.  “There’s no judge,” he said.  “There’s nobody there on the other side.  We won’t know what this prosecutor told the grand jury unless and until there’s an actual criminal trial.”

First, he explains, David Daleiden was charged with the misdemeanor of trying to buy baby body parts.  Daleiden’s indictment reads: “[T]he Defendant… did then and there unlawfully, intentionally and knowingly offer to buy human organs, namely, fetal tissue, for valuable consideration.”  Napolitano explains that this is a “crime of intent” – meaning Daleiden must have intended to actually purchase baby body parts for the felony to have been committed.  Neither side has attempted to argue that this is true; in fact, Daleiden’s felony charge of creating a fake ID contradicts the idea that he actually intended to buy human organs because the false identity was assumed expressly for the purpose of exposing Planned Parenthood via undercover work.

The charge related to purchasing trafficked organs is also problematic because, in order to charge Daleiden with attempting to buy fetal organs, scrutiny must be placed on the selling party, Planned Parenthood.  The only way Planned Parenthood could have been exonerated from the tandem charge of intent to sell human organs would have been if the business had refused Daleiden’s request.

Napolitano iterated that Harris County’s indictment of undercover journalists from the Center for Medical Progress was a political hit job.  He also cautioned that the act of prosecuting a witness bringing crimes to light threatens to “chill” the investigative efforts of every journalist – and many government officials, who employ the same tactics in their quest for truth and justice.  The audacious precedent set by Harris County in punishing the whistleblower and not the law-breaker is chilling indeed.