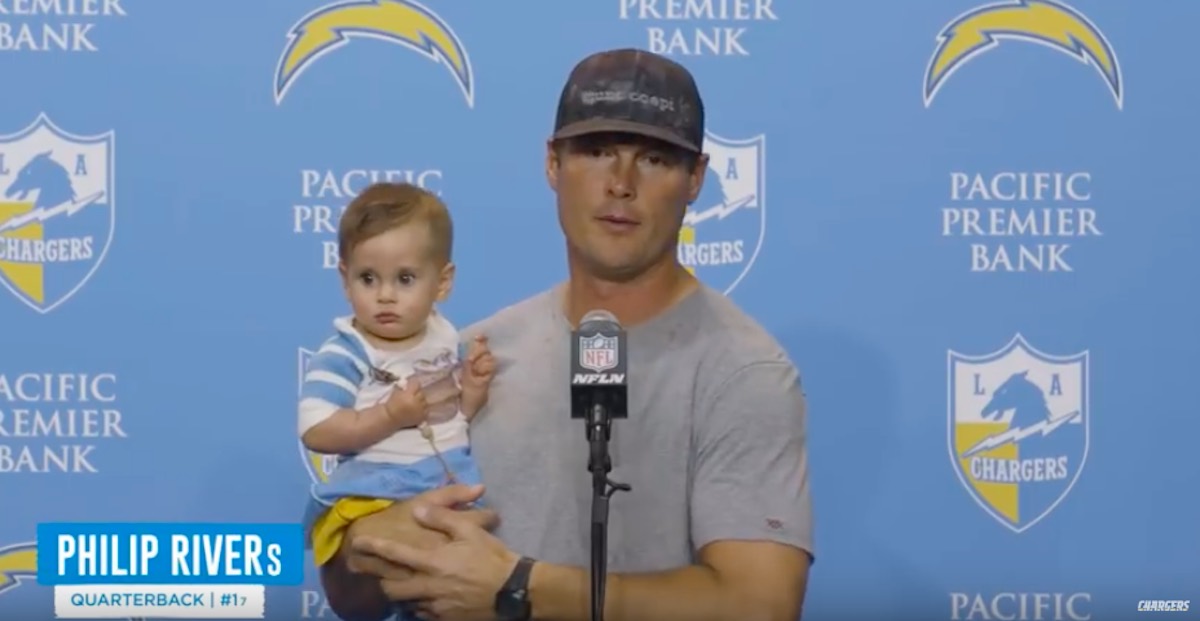 The Los Angeles Chargers may have beaten the Green Bay Packers on Sunday but the MVP of the game never even took the field. Chargers’ quarterback Philip Rivers’ seven-month-old baby girl Anna had all eyes on her when she made a special appearance with her father at a post-game press conference.

According to Aleteia, Rivers is a devout Catholic married to his high school sweetheart Tiffany, who converted to Catholicism when they were married at ages 19 and 18. Little Anna is their ninth child. She wore Chargers team colors as her father swayed back and forth while speaking – as parents of babies are known to do instinctively while holding their little ones. Rivers moved her seamlessly from arm to arm as he spoke, never losing focus on what he was telling the press while Anna held her focus on the microphone, trying to grab hold of it.

With nearly 11,000 views and counting, fans loved seeing Anna, commenting on how cute she is. One commenter even wrote, “LET THE BABY SPEAK.” Others asked if she was baby number 9 and if there would be a number 10.

Rivers made history in March when he became one of only three quarterbacks with 200 career starts. He has been called a “surefire Hall of Famer.” But football doesn’t compare to his love for his family. He has a solid reputation for putting his family first – that includes his wife and their seven daughters and two sons.

“He always wants to be with us,” his son Gunner told the Chargers. “Whenever he’s home, he plays with us and he’s with us all the time. Wherever we go out – we go all kinds of places – random people just come up and ask for his autograph and for pictures. It’s cool. But he’s always there for us. But when he’s home, we like to throw the football in the yard. We like to putt on the putting green, watch football and do things like that.”

His daughter Halle called Rivers “selfless,” adding, “He’s an NFL quarterback; he’s doing a million different things every day, but every day he comes home, and he wants to be with us. If he has one extra minute that he could do something else, he’ll be with us.”

Rivers told the San Diego Tribune after his team relocated from San Diego to Los Angeles that he didn’t want to uproot his family from their home, so rather than move, he figured out how to turn a now 90-minute commute into work time, using a converted SUV to review game and practice tapes.

“My two biggest things were my family time and my preparation and what I owe this football team,” he said. “I was not going to sacrifice either of them in any big proportion. I can look at all the pluses and minuses and say, “OK. This does it.’ This allows me to get home in the 6 to 7 hour, which is when I got home the last 11 years, and it allows me to watch all or more of the film I watched before.”

Rivers calls himself “very pro-life.” Before Anna was born he was asked if he and his wife were “done” having children to which he replied, “No! Heck no, I hope not!” And that love for life and the blessing of children is what gave us all the joy of watching baby Anna grab for that microphone.