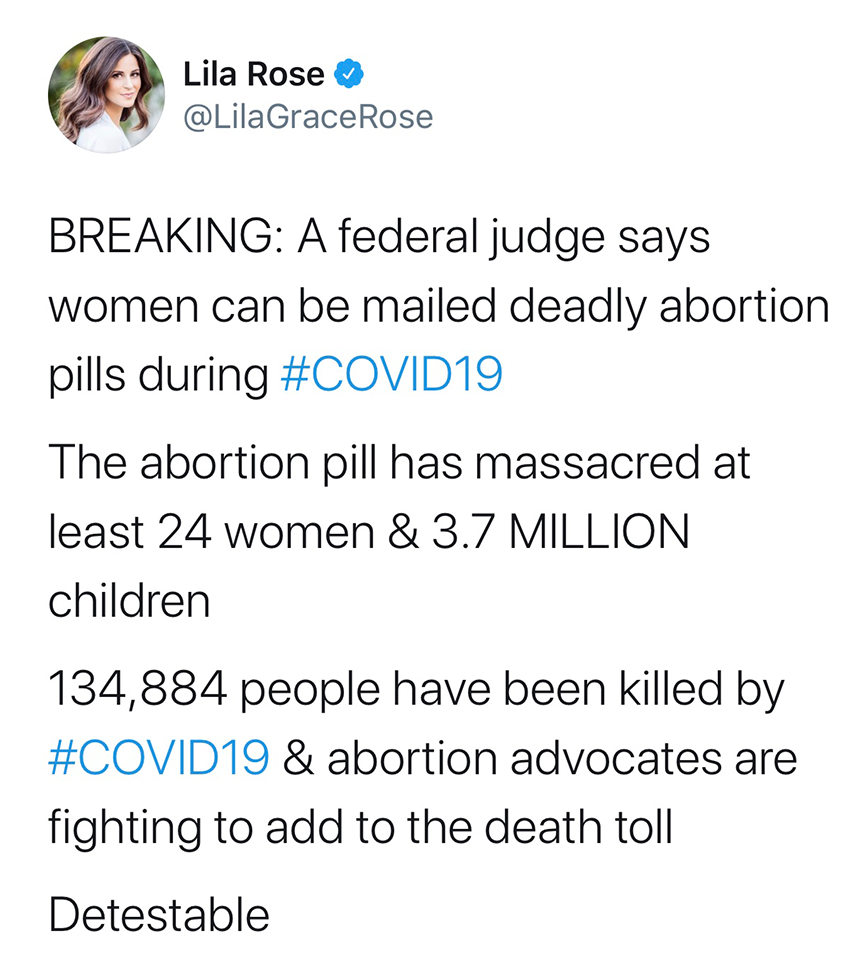 “The abortion industry is using a deadly global pandemic to increase their abortion sales and raise the abortion death toll. The dangerous abortion pill regimen has killed at least 24 women since its FDA approval in 2000 and caused over 4,200 adverse maternal reactions. The drug has killed more than 3.7 Million innocent children. The FDA regulation known as the Risk Evaluation Mitigation Strategy (REMS) is in place to ensure the drug is administered by an approved prescriber equipped to accurately assess pregnancy and the risks associated with ingesting the dangerous abortion drug regimen.

“An embryo’s heart can be detected 3 weeks after fertilization, and brain waves can be detected 3 weeks after that. At 7 weeks, the baby kicks and jumps. The abortion pill regimen works by starving the developing embryo of nutrients and forcibly expelling him or her from the mother’s body. This lethal regimen is approved by the FDA to kill children up to the tenth week of pregnancy, though abortion businesses and clinical trials openly dispense it further into pregnancy.

“This is a sad day for women and children across the country. By pushing to enjoin the FDA REMS regulations, the abortion industry, which profits off of killing children, has revealed its ugly lack of care towards pregnant women. Our reporting shows that Danco, the abortion pill manufacturer, is veiled in secrecy. The location of the manufacturer is unavailable to the public and many of the drug’s investors are secret. In 2006, Shanghai-based Hualian Pharmaceutical Co. (Hualian), a pharmaceutical company owned by the Chinese Communist Party, was identified as at least one of Danco’s manufacturers. In 2008, Hualian was caught giving contaminated leukemia drugs that paralyzed at least 200 Chinese cancer patients. It’s time reporters start asking questions about who is behind this agenda. We remain committed to protecting preborn lives and encourage all to fight against this reckless, deadly agenda.”

Live Action is a national nonprofit organization dedicated to exposing the truth about abortion and affirming the life of every child. Live Action exists to change hearts and minds about abortion through compelling educational media, human interest stories, and investigative reporting that exposes the lies and corruption in the abortion industry. With the largest online following in the pro-life movement, Live Action’s videos and content reach millions of people every week. Find out more at http://www.liveaction.org