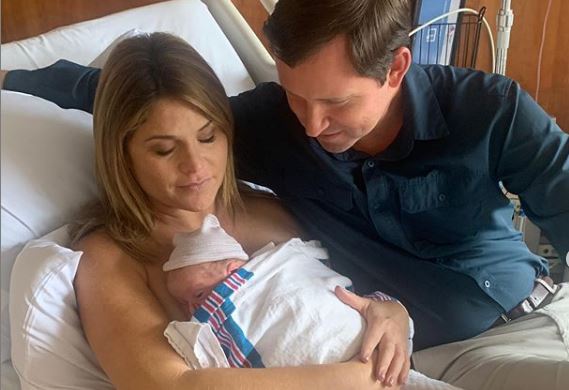 On Friday, August 2, Jenna Bush Hager and husband Henry Hager welcomed their third baby, a boy. Bush Hager announced the news in a segment on the TODAY Show where she is a regular host.

“It feels right. It feels perfect,” she said about adding to her family.

The baby, named Henry Harold Hager after her husband’s father and Bush Hager’s grandfather, joins big sisters Mila, 6, and Poppy, 3. Bush Hager told her co-hosts on the TODAY Show that the entire family is thrilled, and came to meet him after he was born.

She shares the story behind his name, how her daughters are already the best big sisters and more. pic.twitter.com/FfjpNDDhxL

Bush Hager quipped that her father, former president George W. Bush, “was a little mad that the name wasn’t George,” adding, “He said it was a cool name.” Bush Hager and her husband thought of nicknaming the baby “Hal,” and his big sisters decided to call him “Hal Pal.”

Reflecting on the tragic news that rocked the nation over the weekend of two deadly mass shootings within 24 hours, Bush Hager said, “I think when you’re holed up in a hospital room with a newborn and you see the joy and the light in his eyes, you realize this is what life’s for and to make the world better for our little babes.” She continued, “Even though the news outside these walls isn’t great, you see the joy in their eyes and know that’s what we’re here to do… to make their lives safe.”

Welcome to the world my darling Henry Harold “Hal” Hager! Hal came into the world Friday, August 2, 2019 at 9:02am and our life has never been sweeter. ❤️❤️👶🏼

While her team on the TODAY Show was completely supportive and excited for her pregnancy, Bush Hager’s nervousness about the timing highlighted the issue of pregnancy discrimination which many women still face in the workplace. They fear becoming pregnant or announcing a pregnancy because of the repercussions it might have.

Knowing her twin sister Barbara (a fervent Planned Parenthood supporter) and her co-host Kotb were both dealing with infertility added to Bush Hager’s hesitance to announce her third pregnancy. She shared these concerns with her mother, former first lady Laura Bush, who also struggled with infertility. Her mother (who has also expressed support for abortion) said in response, “Everybody gets their babies when they’re supposed to.”

The pregnancy and birth of baby Hal were not taken lightly by Bush Hager. “I know how blessed and lucky I am,” she said. “It’s an amazing gift.”