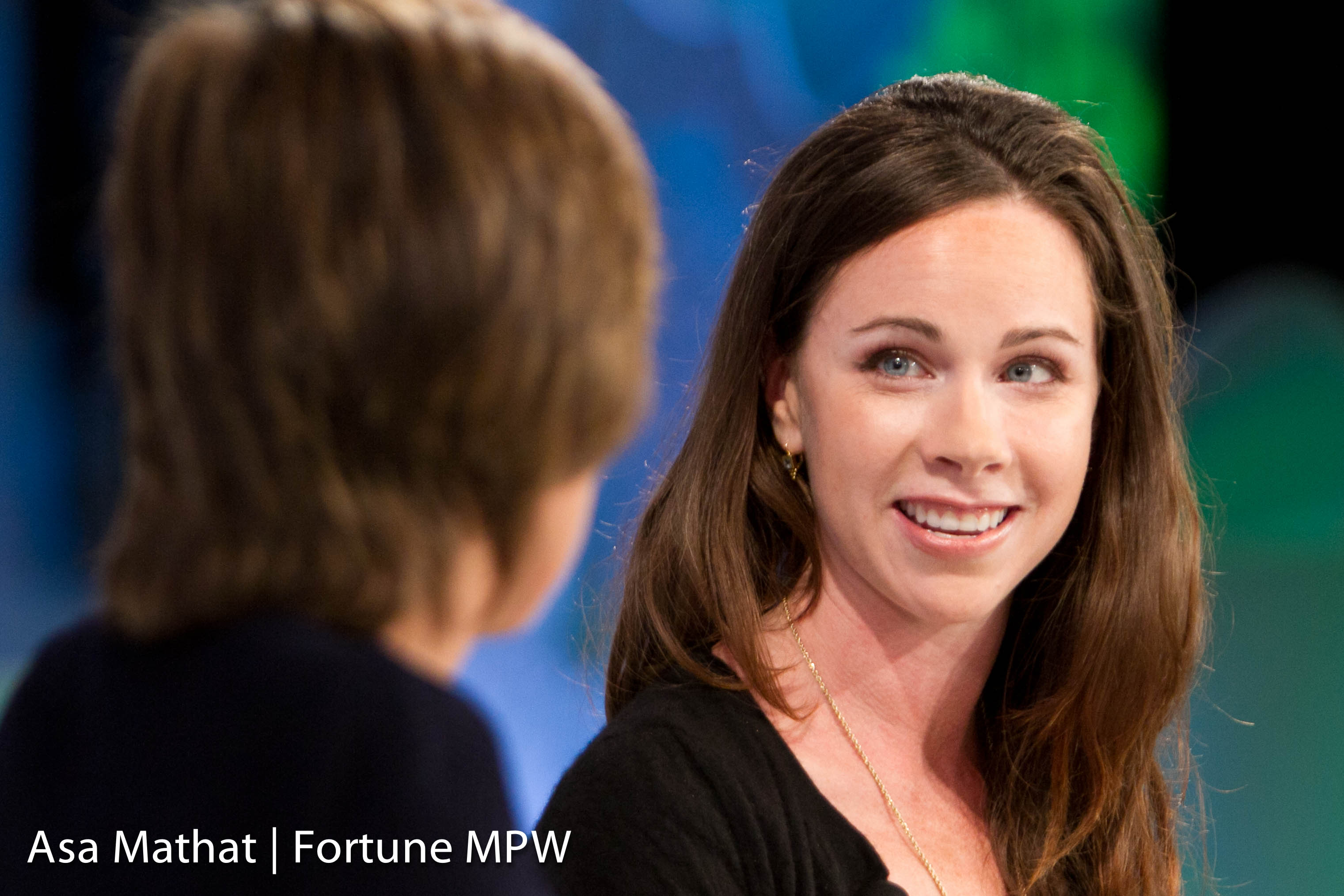 The daughter of former president George W. Bush, Barbara Pierce Bush, will be the keynote speaker at a Planned Parenthood event in Fort Worth, Texas on March 1st. Sadly, this is not surprising given the Bush family’s connection to the largest chain of abortion clinics in the nation.

According to the announcement on Planned Parenthood’s website, proceeds from the Fort Worth Annual Luncheon will support Planned Parenthood’s “essential healthcare and health education services to women, men, and young people in Central and North Texas.” Planned Parenthood, whose market share of abortions nationwide is over 34 percent, often claims that abortion is a small percentage of what they do. This claim, however, has been debunked by Live Action who recently released an interview with former Planned Parenthood workers who stated that the organization, which receives over $500 million in federal tax dollars a year and has failed to report child sexual abuse, actually has abortion quotas.

In 2015, the Dallas Morning News described what they called the “quieter half of the Bush twins” as a liberal who advocated abortion rights:

Barbara is often tagged as a liberal within the Bush clan; she lives in New York and her initiative’s ties include abortion-rights groups. But she wiggles out of attempts to label her or her work.

Bush’s mother, former First Lady Laura Bush, has expressed support for the legality of abortion on a handful of occasions. The younger Bush, the CEO and co-founder of Global Health Corps, called Planned Parenthood an “exceptional organization” in a June New York Times interview, and attended a fundraiser for Democratic presidential candidate Hillary Clinton in Paris in October.

Although, Barbara Pierce Bush’s father, George W. Bush was outspoken against abortion during his tenure as president, Live Action News has documented how her grandfather, George H.W. Bush was one of the chief co-sponsors of the Title X statute, which allocates millions of federal tax dollars to Planned Parenthood and other family planning organizations. Congress is currently working to remove that funding.

In an interview with Larry King, Barbara Pierce Bush’s grandmother Barbara Bush once described how her miscarried child was placed in a jar. In 1994, Barbara Bush told Larry King that she was “pro-choice” on abortion. The former first lady followed that statement by claiming that she agreed with the President (who- at the time ran as a pro-life ) “99 percent of the time on that subject.” She then told King, that “I personally feel that abortion after the first trimester is wrong” and called 1.6 million abortions a year (at that time) “an outrage.”

Unfortunately, the connection the Bush family has had to Planned Parenthood goes back even father to George W. Bush’s grandfather, Prescott S. Bush. 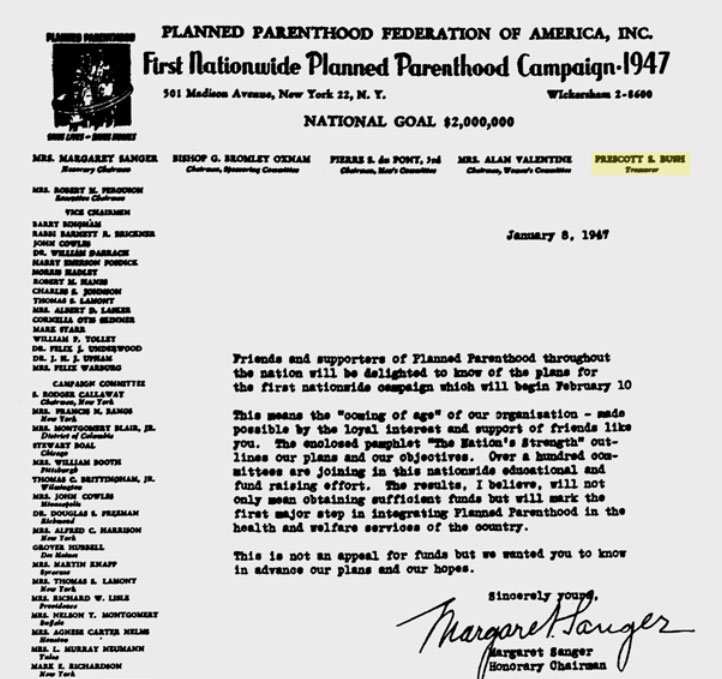 This Planned Parenthood fundraising letter (pictured left) dated January 8, 1947, lists Prescott S. Bush as treasurer of Margaret Sanger’s first national fundraising drive. At one point in his political career, Prescott Bush’s advocacy of birth control, which may have originated with his wife Dorothy, had also been credited with costing him his seat in Congress. An excerpt from “The Bush Tragedy,” written by Jacob Weisberg and published in the New York Times, elaborates further:

In 1950, [Prescott] Bush was running even with William Benton, the Democratic nominee. But on the Sunday before the election, the muckraking columnist Drew Pearson asserted on his radio show that Prescott was treasurer of the Birth Control League. In the days before Griswold v. Connecticut, birth control remained illegal in the majority-Catholic state. While the family has long decried this as a smear, it was in fact a minor distortion — carefully orchestrated for maximum harm. Prescott was listed as treasurer on a letterhead for Planned Parenthood, a successor organization to the Birth Control League, which had closed up shop in 1942. Though he denied the charge, Prescott lost by 1,102 votes.

A report published in 2015 by LifeSite News revealed that Jeb Bush, who ran as a candidate in the 2016 presidential race was “director of a philanthropy that gave tens of millions of dollars to Planned Parenthood and financed its advocacy of ‘unrestricted access to abortion’ around the world.”

In March of 2014, the Bloomberg Philanthropies announced a $50 million undertaking to expand “reproductive health,” including lobbying foreign nations to loosen restrictions on abortion.Bloomberg announced a major partnership with Planned Parenthood-Global to train and equip abortion activists in pro-life countries.

On March 1st, when Barbara Pierce Bush keynotes at the Planned Parenthood Fort Worth event, she will be supporting a clinic with an unsafe track record.  A survey of the Fort Worth Planned Parenthood center, conducted by Texas state health inspectors in January of 2016 found that the abortion facility had several deficiencies including expired medications, no documentation that three of the clinic’s suction machines had preventative maintenance checks, expired medical supplies in the clinic’s emergency crash cart, a duster used for cleaning lying next to patient sterile supplies, and a biohazard waste box stored in the same room as sterile patient supplies.

Inspectors also found that staff at the abortion center had failed to maintain the sterility of the surgical instruments and failed to know the Hepatitis B status of several patients which could have placed other patients as well as staff at risk of being exposed to the virus.

In 2016, the pro-life group Operation Rescue reviewed health inspection records from 16 of 17 Texas abortion facilities, including the survey previously conducted at the Fort Worth Planned Parenthood, and found several serious violations which they detailed on their website and in the video below.

Although the former Republican president’s daughter will be helping to fund Planned Parenthood, recent 990 tax documents from Planned Parenthood Greater Texas (PPGT) show that by the end of 2014, PPGT had net assets of over $42 million. The organization sent over $550,000 in annual dues to their mother-ship, Planned Parenthood Federation of America (PPFA).